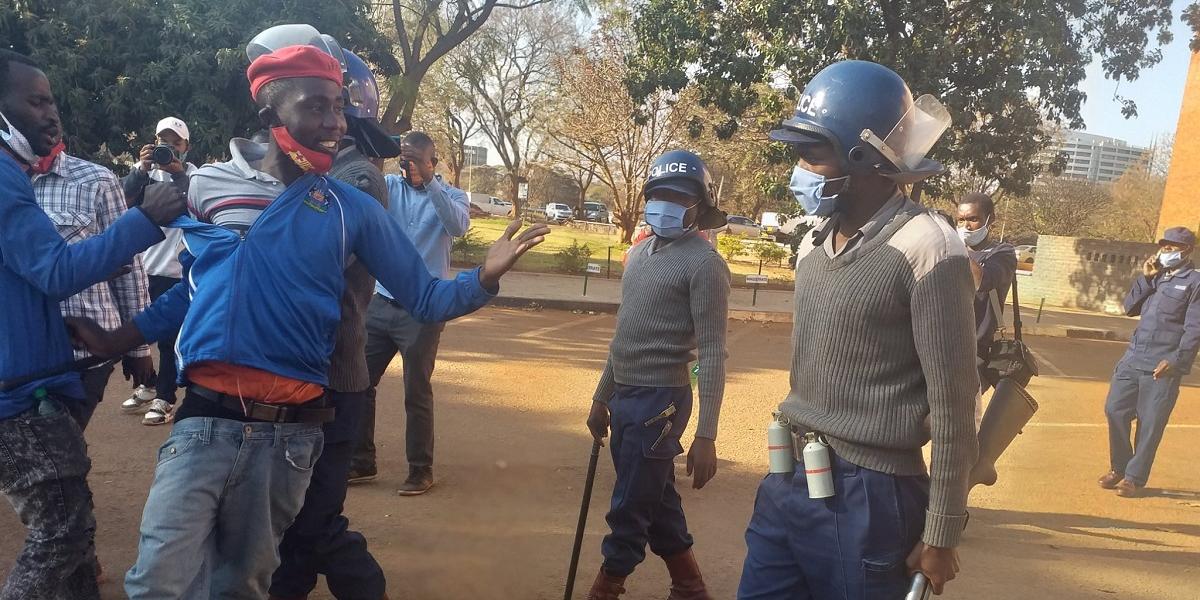 Police Arrest some of MDC Alliance protesters who were demanding the release of Job Sikhala.

Zimbabwe Republic Police on Monday clashed with supporters of the opposition MDC Alliance who had thronged to Rotten Row Magistrates Court in solidarity with the party’s national vice-chairperson, Job Sikhala who was due to appear in court.

The party’s vice president Tendai Biti claimed that members of the police assaulted protestors who were demanding the release of their leader. Click here to see the picture.

The reports were corroborated by the Zimbabwe Lawyers for Human Rights (ZLHR) which posted on social media saying some of the protesters had already been arrested.

Pictures circulating on social media show a police officer dusting himself after he was taken down by a demonstrator during skirmishes with the protestors. Click here for pictures 1; 2; 3; and 4.

The assault by the Police on citizens who had come to provide solidarity to Job this afternoon is barbaric & uncouth. There is something terribly wrong, terribly fascist, pathological & insecure in a regime that daily brutalizes its citizens. This is now out of hand @PresidencyZA

His post comes after special envoys which had been sent to Zimbabwe by South African President Cyril Ramaphosa who is also the current chairperson of the African Union to assess allegations of human rights violations, have since returned to South Africa.

Zimbabwean authorities deny involvement in alleged human rights violations saying enemies of the state are peddling lies to dirt the image of the government.

The Zengeza West legislator was arrested on Friday last week and was charged with inciting public violence after encouraging the public to participate in foiled 31 July anti-government protests.

Sikhala who has been on the run for weeks after the police had indicated plans to arrest him says he did not violate any law adding that he was just exercising his constitutional rights.