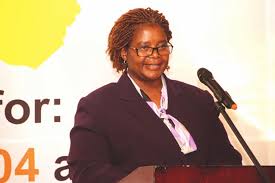 A Harare Magistrate, Lazini Ncube yesterday sentenced former PetrolZim Boss Cathrine Katsande to 5 years in jail after convicting her on 6 counts of fraud, The Herald reports.

55-year-old Katsande was jailed for fraudulently awarding a company called Keltrade a $2 Million Contract to supply equipment when she was the PetrolZim General Manager.

Ncube initially sentenced Katsande to 90 months before suspending 30 months on her jail term after the state successfully proved beyond reasonable doubt that:

On June 24, 2013 Katsande authorised a payment of US$159 925 after Keltrade had submittedmitted a quotation indicating that it had capacity to supply a gearbox for 10 gate valves. The money was paid before Keltrade supplied the goods.

On September 24 of the same year, she also authorised payment of US$610 640 to Keltrade after it indicated that it had capacity to supply two skid pumps.

On December 9, 2013, Katsande advanced US$363 860 after Keltrade presented a quotation indicating that it was able to supply two ethanol centrifugal pumps. The money was paid before the supply of the pumps.

In February 2015, Katsande also authorised payment of US$91 082 after Keltrade gave her a quotation for the supply of drag resistant spares. In the same month, Katsande is said to have given permission to payments of various amounts to Keltrade without following laid down procedures.

In March 2015, Katsande was instructed to purchase goods from MIS Solutions, but she disregarded the recommendation and gave the tender to Keltrade.

According to the company’s tender procedures, goods and services had to be supplied before payment was processed, in exceptional instances, the board finance committee then had to first approve payments before they were made.

The magistrate also fined the company in question Keltrade (Pvt) Limited $53 000 for the same offences.