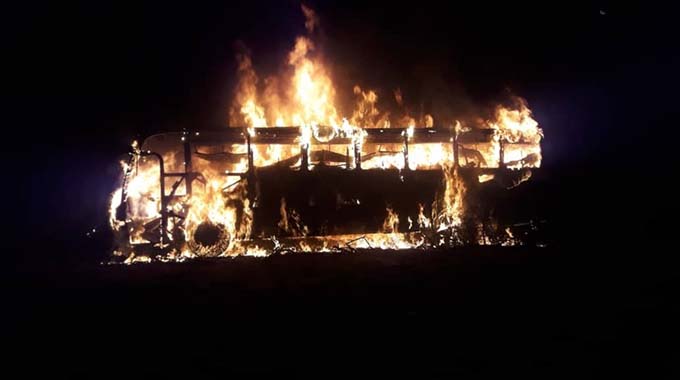 At least three Zimbabwean citizens were killed in Zambia on Sunday morning when a fire broke out following a three-truck pile up at the Kapiringozi Escarpment along the Chirundu-Kafue Road.

Reports from Zambia indicate that one of the drivers of the trucks lost control of the vehicle as it was descending the mountainous area due to excessive speeding.

The vehicle then rammed into an oncoming truck before hitting a broken down truck, igniting a huge fireball as one of the trucks was carrying suspected Jet1 Fuel.

Zambian police and fire brigade managed to put out the fire but the number of people who have died in the accident has not yet been established.

Police in Chirundu received a report of a road traffic accident which happened today 16th August 2020 around 6.40 am on Chirundu-Kafue road at Kapiringozi hills involving three trucks.

Involved in the accident was an unknown motor vehicle driven by an unknown driver with an unknown number of passengers who are suspected to have been burnt to ashes.

The accident occurred when the unknown driver who was driving the completely burnt truck and was descending the hill lost control due to excessive speed and hit into a FAW Motor vehicle which was carrying suspected Jet1 Fuel.

It also hit a stationary Volvo truck which had a breakdown and all the vehicles caught fire and were completely burnt.