Zimbabwe’s Minister of Information, Publicity and Broadcasting Services Senator Monica Mutsvangwa on Saturday verbally attacked Catholic Archbishop Robert Ndlovu over his criticism of the human rights violations in the country.

Mutsvangwa described the pastoral letter that raised concerns over human rights violations as evil and misguided adding that it could cause divisions in the country.

Ndlovu had rallied the citizenry to stage anti-government protests over the alleged human rights violations. Below is Mutsvangwa’s statement.

Tomorrow is Sunday, a holy day on the weekly Christian calendar.

Ahead of the Catholic Sunday Mass, the Government of Zimbabwe (GoZ) draws the attention of the national Catholic congregation shards of a Pastoral Letter issued under the misguided if evil-minded leadership of the Archbishop of Harare.

As the GoZ we vehemently object to and strongly condemns the Pastoral letter of Archbishop Ndlovu and his coterie of Catholics Bishop prelates.

Its evil message reeks with all the vices that have perennially hobbled the progress of Africa. It trumpets petty tribal feuds and narrow regionalist agendas so that it can sow seeds of internecine strife as a prelude to national disintegration.

Indeed Archbishop Ndlovu dons the robes of Archbishop Arthanase Seromba who was the chief spiritual ideologist and violent practitioner of the 1994 Hutu-Tutsi Genocide of Rwanda. These crimes against humanity took place during the Rwandan Civil War that saw more than 800 000 Tutsi minority, pygmy baTwa tribe, and moderate Hutus massacred on such a large scale.

The infamous Rwandese Catholic Archbishop would eventually be tried and sentenced to life imprisonment by the International Criminal Tribunal for Rwanda.

With nefarious cynicism to history, Archbishop Robert Christopher Ndlovu is inching to lead the Zimbabwe Catholic congregation into the darkest dungeons of Rwanda-type genocide.

The letter seeks the revival and continuation of the perennial vices of division. It has a selective and warp-sided reading of history. The errant and evil Bishop has a nauseating mental amnesia of the blight of minority settler rule and its baggage of exploitative racism against the totality of the black majority popular of Zimbabwe.

The levity of his mental amnesia is worsened by the fact that he tears off pages of the progressive crusade for justice and democracy that has hitherto been the shining virtue of the Catholic Church in Zimbabwe.

Who can forget the venerable Bishop Lamont of Mutare and his brave defiance of the illegal and racist rule of Ian Smith and his 1965 Unilateral Declaration of Independence?

How Bishop Lamont of the Carmelite Missionary Order in Zimbabwe went on to be a victim of a probably contrived car accident, his incarceration and eventual deportation.

Yes, that brave man of the cloth could only return to Zimbabwe after 1980 in the wake of the victory of the National Liberation Movement.

It is equally not so that the priests and nuns of the Catholic Church led high among the victims of the Rhodesian Selous Scout secret army as they hunted down religious sympathizers of the National Liberation War- Chimurenga-Impi YoMvukela.

Shutting aside the glorious past of the venerable Zimbabwe Catholic Church, the malicious and mischievous Archbishop seeks to tarnish history precisely during the National Heroes Day and Defence Forces Holiday.

He wants to posit as the leader of righteous Ndebele minority by fanning the psychosis of tribal victimization. Concurrently he sows sins of collective guilty on the Shona majority. That way he seeks to numb the spirit of collective national vigilance against the known and proven enemies of the populace of Zimbabwe.

Fellow Zimbabweans, Gukurahundi is indeed a dark spot in the tortuous task of nation-building by Zimbabwe. The two parties of that needless chapter of history need to be hailed for seeking peace and unity as they avoided the abyss that could have been a full-blown civil war. Happily, we ended up with the 1987 Unity Accord.

For the record, not even newly independent America could avoid a Civil War between 1861-65. Yes, the America of the virtues you selectively allude to.

Archbishop Christopher Ndlovu, you ardently call that the March has not stopped. This is a pathetic admission of the failure of the 31 July 2020 Uprising.

You were born into the 1970s Generation thousands of whom became ZANLA-ZIPRA cadres of the guerrilla army that made the supreme sacrifice for freedom and independence.

I am even much younger than you yet I fought in that war. Admittedly made that fateful decision to join the armed struggle. What I ask is if you have such a charged political spirit, why did you not answer to that call of heroism in the 1970s.

Your pastoral letter feigns contrived courage by a dyed in the wool coward.

The Government of Zimbabwe calls upon the Catholic Congregation to ignore the specious Pastoral letter. Bishop Christopher Ndlovhu is leading a coterie of Zimbabwe Catholic Bishops along the wrong path of bygone petty tribalism, narrow regionalism and the debunked and defeated racial antagonism.

The letter is full of generalized accusations. By way of contrast, the meticulous Catholic Peace and Justice Commission of the anti-colonial, anti-racist epoch collated, compiled and published dossiers of specific crimes committed by the colonial settler minority regime.

The Archbishop and his flock of misled Catholic Bishops have none of that diligence. Instead, they wallow in generalized and baseless accusations. Absolutely no shred of reported evidence of so-called victims.

This is the era of COVID 19 pandemic. The World Health Organization daily announces strictures to assist national governments to fight and contain the pandemic.

In the face of all that, our narrow-minded Bishop pontificates against COVID 19 rules. Even when America, his much-admired paragon of democracy and justice is complying. Recently President Trump had to call off the National Convention of his Republican Party slated for Jacksonville, Florida.

In the eyes of the reckless Archbishop, pride of place is accorded to the crusade against the governing and ruling party of Zimbabwe. The cause of national health in face of a pandemic is of no consequence. By calling people to march in the midst of the pandemic The Bishop relishes the prospect mass deaths. To him maybe that speeds up the ascend of the populace of Zimbabwe to their biblical judgement of heaven or hell.

And behold Pastoral Letter of the Zimbabwe Catholic Bishops Conference of 14th August 2020 does not bother to invoke the repeated Papal calls for a global ceasefire in regions of war and strive. Clearly the Pope’s to allow nations to concentrate effort and resources to the fight against global pandemic. None other than Pope Francis once again implored the United Nations Security Council to pass a Resolution to this effect as recently as 5 July 2020.

This noble aspiration of the Pope as head of the global Catholic Church is cited nowhere in the offending Pastoral Letter of the hate-mongering Archbishop Christopher Ndlovu.

For God’s sake, why ignore the letter and spirit of the supreme Archbishop in the Vatican? If wars and strife can be wished away, how about a mere political uprising under the guise of an ill-fated mass demonstration?

To Catholics in Zimbabwe, you were part to the total rebuff to the call of an Uprising on 31 July 2020. You already showed your mettle of sound and mature political judgement.

Do not be fooled anew by the ill-advised call which says “The March has Not Ended”.

No No No! His Excellency President Emmerson Dambudzo Mnangagwa will have none of that. He will strive to dutifully protect the wellbeing and health of the people of Zimbabwe. 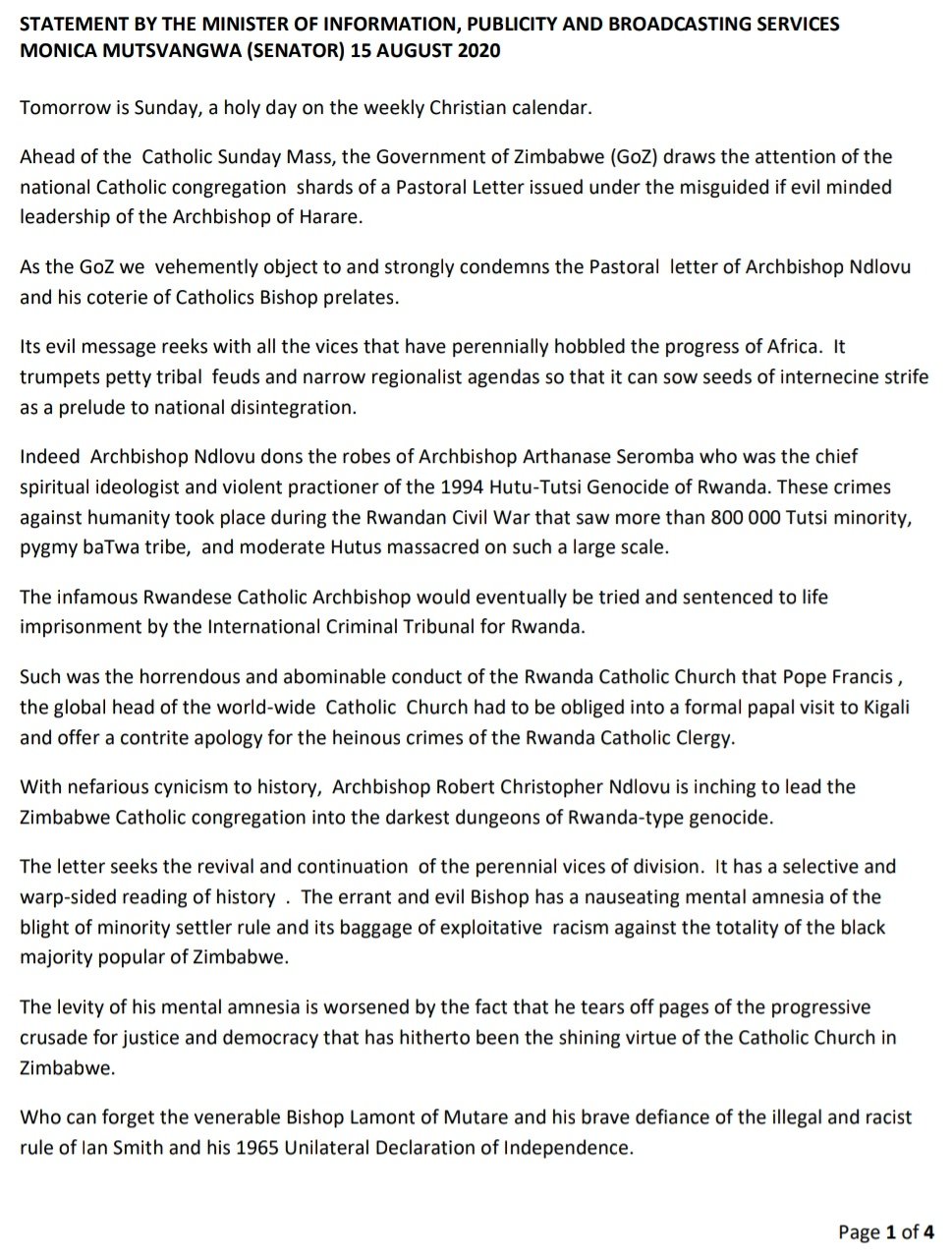 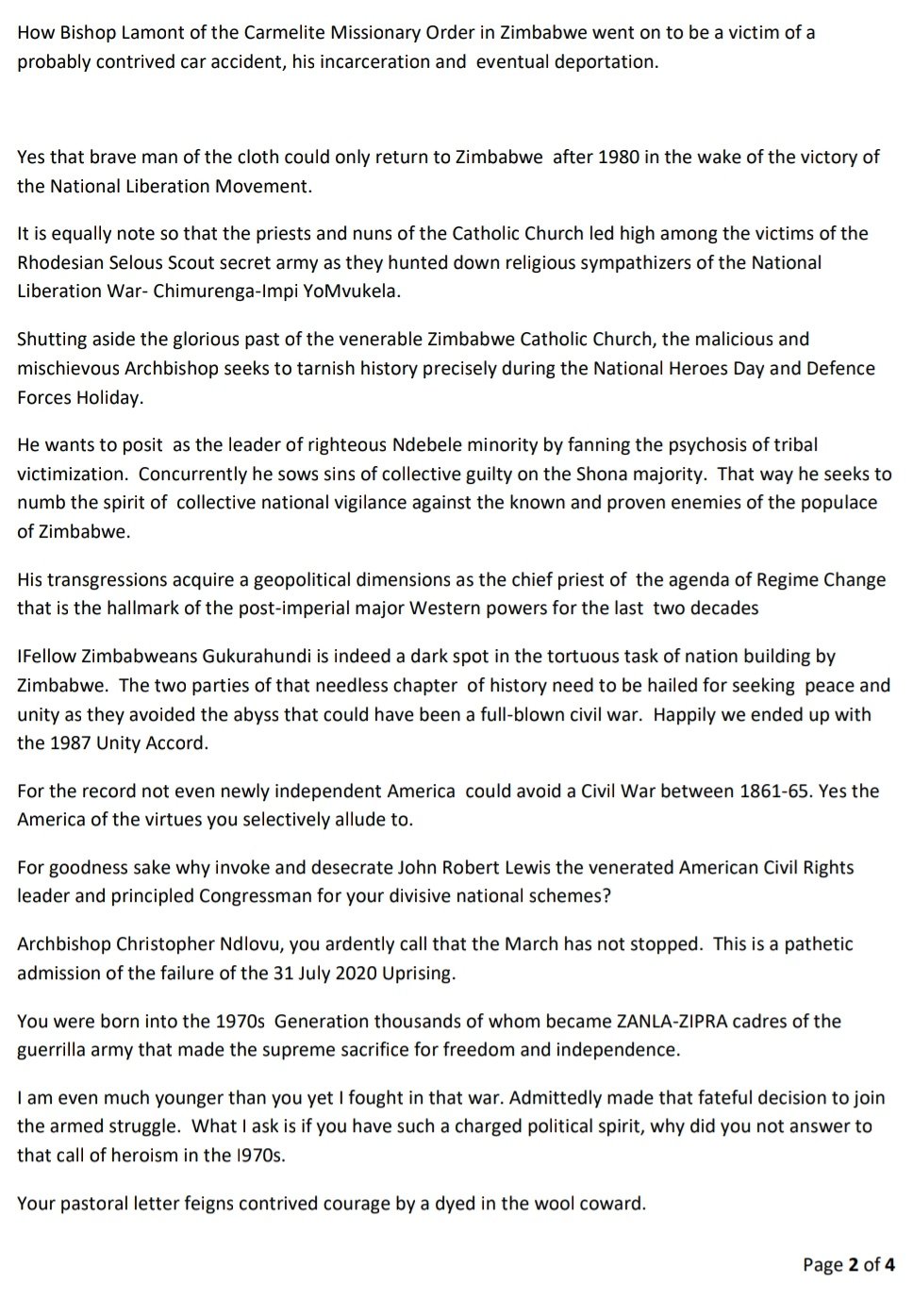 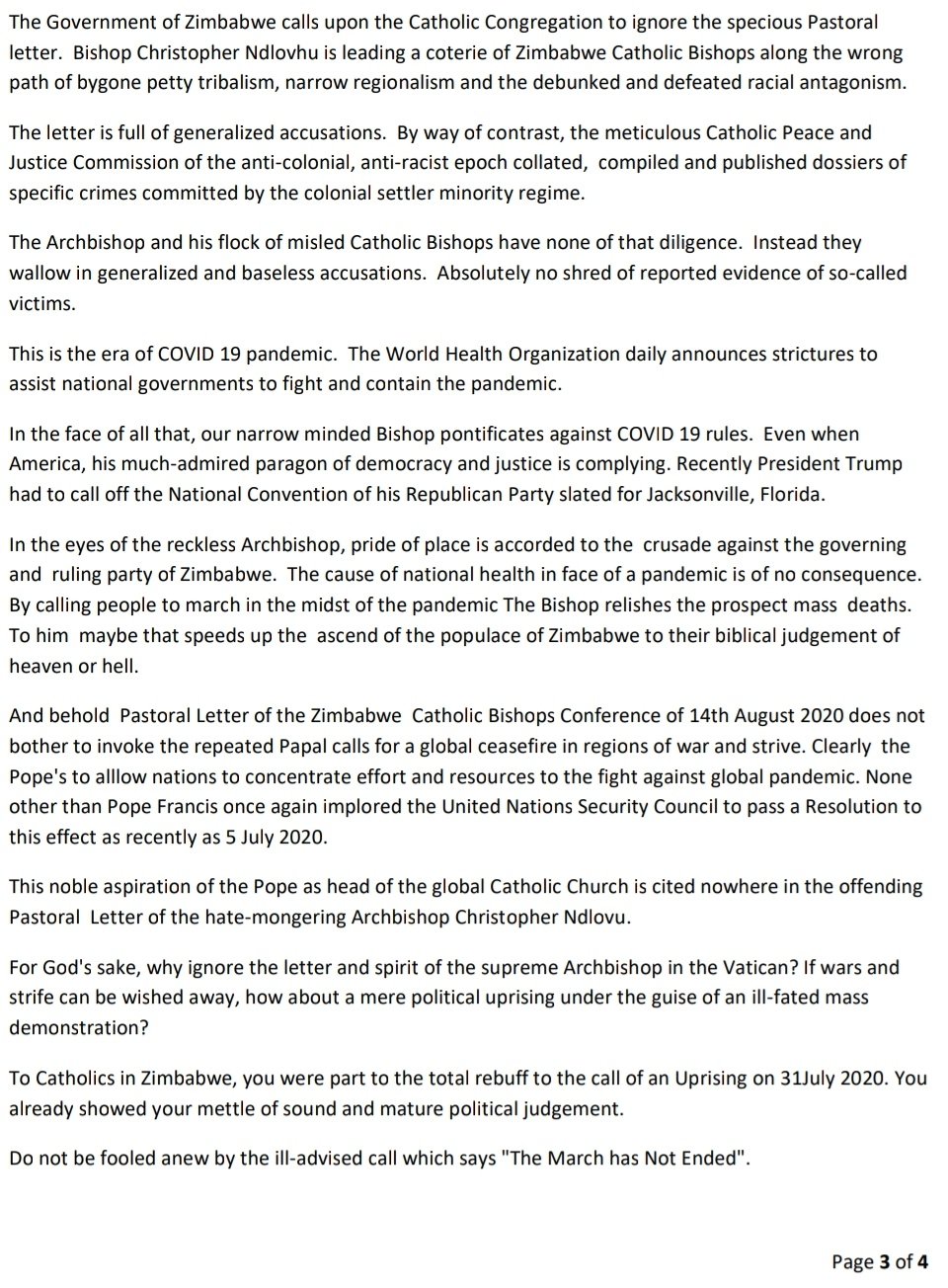 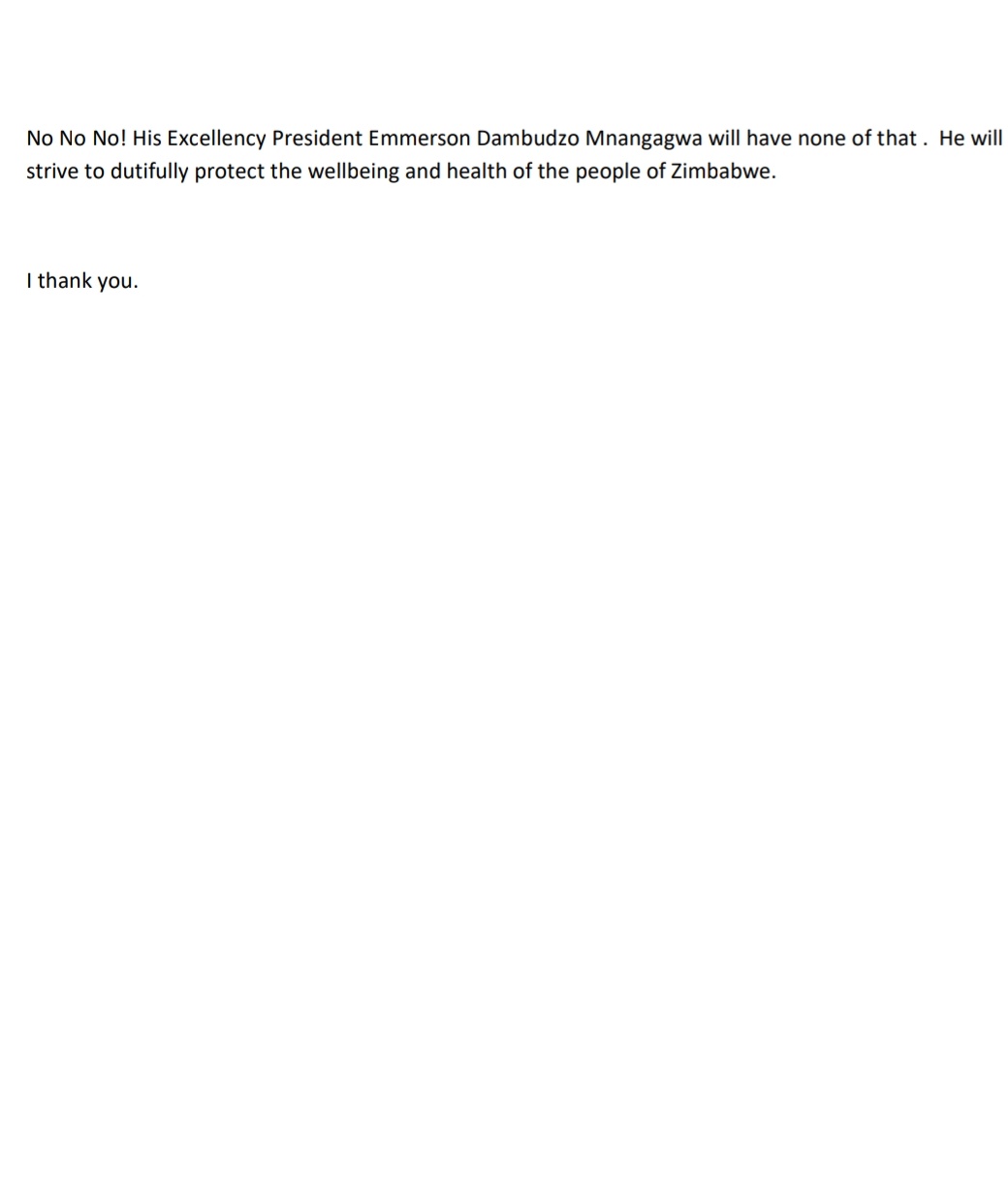 Leave a Reply to fuck you zanus Cancel reply