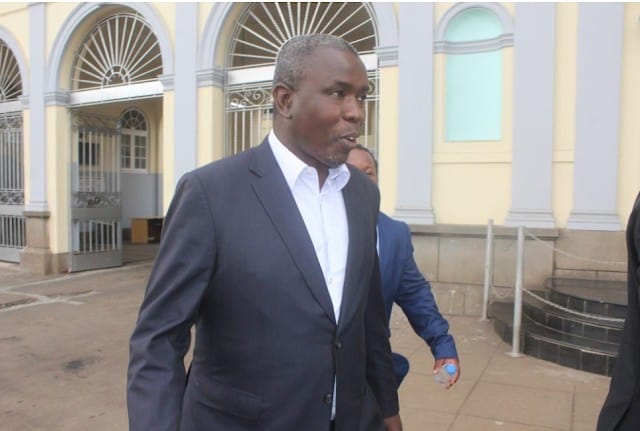 ZANU PF has noted and acknowledged the OFAC sanctions imposed on Mr Kudakwashe Tagwirci and Sakunch Holdings. This comes as no surprise as these sand ions follow relentless orchestrated attacks over the past 12 months targeting the President CDE ED Mnangagwa. members of the First Family, Government of Zimbabwe and its institutions. ZANU PF and its Leadership.

Since the ZANU PF Government embarked on the Land Reform and Redistribution Programme in 2000. Zimbabwe has been wilting under the yoke of USAsanctiorn whose main objective has been, to quote former US Assistant Secretary of State for African Affairs Mr Chester Crocker, to make the economy of Zimbabwe scream and to separate ZANU PF from the people to achieve an illegal regime change.” As such, these sanctions have targeted pillars of our political economy with a view to reversing the land redistribution program as the CIA succeeded in doing the same in Guatemala from 1951 when they toppled the legitimately elected President Juan Jacobo Arbenz Guzman who had embarked on a Land Reform exercise. In Zimbabwe, these machinations will never succeed. Outsiders underestimate the grit and resilience of the Zimbabwean people. The 31 July antics were an attempt by USA sponsored forces to do a Guatemala on Zimbabwe. Such attempts will fail.

ZANU PF and the world at large is at a loss to understand the geopolitical reasons motivating the Sole Global Super Power which the USA is; descending on a small country like Zimbabwe with a sledgehammer on the basis of falsehoods perpetrated by individuals and the 4000 NGOs or so it has sponsored to peddle lies and fake news against the ZANU PF Government and its National Leadership. For the record, none of these 4000 NGOs are in the business of sinking borehole & building clinics, hospitals or schools to meet the basic necessities of our people but peddling the regime change agenda in the majority of them. ZANU PF is indeed perplexed that one of the basis for imposing the OFAC sanctions on the entities is the DEMA Diesel Power Project which was undertaken and intended by government to address in the shortest possible time, intermittent power shortages wreaking havoc in our economy and thereby disrupting production across all sectors in the economy. The world needs to be told that the real concern of the USA concerning the DENI A Diesel Power Project is not about any alleged corruption but the failure to win the contract by a USA backed company.APR Energy.

On the issue of Command Agriculture again, the USA has conveniently chosen to act on the basis of falsehoods such as the allegations that Mr Tagwirei and SAKUNDA Holdings defrauded Government and ted and then funded by government to ensure the success of the land reform programme. The Scheme was successful and boosted agricultural output. The scheme was one of the many schemes introduced by the ZANU PF Government to assist farmers and the schemes included the Presidential Inputs Scheme targeting peasant and small scale farmers in semi-arid areas of the country as well as the Farm Mechanisation Support Scheme targeting both small scale and large scale farmers recently beneficiaries of the Land Redistribution Programme. When it operated, 78 000 medium to large scale farmers benefited under the Command Agriculture Scheme. From year to year, more than 1.8 million households continue to benefit from the Presidential Inputs Support Scheme annually and 350 000 households from the Presidential Cotton Inputs Support Scheme.

Allegations forming the basis of the sanctions decision by the USA have been deliberated upon by the Public Accounts Committee of Zimbabwe’s Parliament, chaired by Mr Tendai Biti, whom it will be recalled, along with MDC Alliance leader Nelson Chamisa are perennial honoured guests of the Chairman of the Foreign Relations Committee of the USA Senate, Senator Jeff Flake. Their missions in visiting Washington are always to plead for the extension, continuation of and intensification of USA sanctions against themselves and the Zimbabwean people.
During the Public Accounts Committee Hearing chaired by Mr Biti, Sakunda Holding placed before the committee, all documentation pertaining to all transactions on Command Agriculture and successfully demonstrated that the allegations of corruption were false, fake, fabricated and malicious including allegations that they had received USS3 billion from government. If Mr Biti was man enough, he would have reported that to senator Flake, having observed that Mr Biti feels obligated to be accountable to the USA.

It is in this light that ZANU PF calls upon the USA government to respect Zimbabwe as an independent, sovereign country and in particular, its Parliament and Parliamentary processes. In this regard, ZANU PF calls upon the 4000 or so regime change NGOs sponsored by the USA and its Allies in Zimbabwe to come forward with evidence of impropriate concerning Command Agriculture and bring this to the attention of our law enforcement agents and the Zimbabwe Anti-Corruption Commission (ZACC) for their attention and investigation.

Until evidence to the contrary is established, ZANU PF wishes to place it on record that it considers Mr Tagwirei and Sakunda Holdings a respected player and stakeholder in the economy of Zimbabwe just as we are sure General Electric is considered a respected economic player in the USA and globally. Under our policy of indigenization and economic empowerment of previously disadvantaged under colonialism, ZANU PF’s expectations are that the country will be able to nurture many more Tagwireis and fellow indigenous entrepreneurs to be successful world-class businesses that will make impactful contribution to the reconstruction of our economy and the attainment of President ED Mnangagwa’s 2030 vision to make Zimbabwe an Upper Middle-Income country.

ZANU PF urges its government to continue on the path of Reforms, Engagement and Re-Engagement but the policy of engagement and re-engagement should never be misread as a policy of capitulation and appeasement. President Mnangagwa’s Engagement and Re-engagement is to build bridges between nations. Similarly, any reforms carried out by the ZANU PF Government must be understood that they are primarily to meet and serve the interests of our people and not to be misconstrued as a conditionality for engaging and reengaging any country.

ZANU PF reiterates its unshakable position that Zimbabwe is an independent sovereign state and is not accountable to the USA or any other country. Our policy is to defend the sovereignty, freedom and independence of our people from any external threat or attack. ZANU PF remains resolute and unshaken in discharging the mandate given to it by the blood of our people.

To Fellow Zimbabweans, ZANU PF says to you, that the USA OFAC Sanctions imposed on innocent Zimbabwean entities as has been the case since 2000 should serve as a timely warning that we are our own liberators. We should not look to outsiders for our development. Let us learn to harness and utilise sour domestic resources and capital in order to drive our economy forward, remembering always that the path to development is not an easy one. Let’s rally in unity behind our President, Cde ED Mnangagwa in transforming our economy towards the realisation of the President’s 2030 Vision to make this country an Upper Middle-income Economy.

But we will succeed in our endeavours if as enjoined by USA President Trump for his country, we put Zimbabwe First. 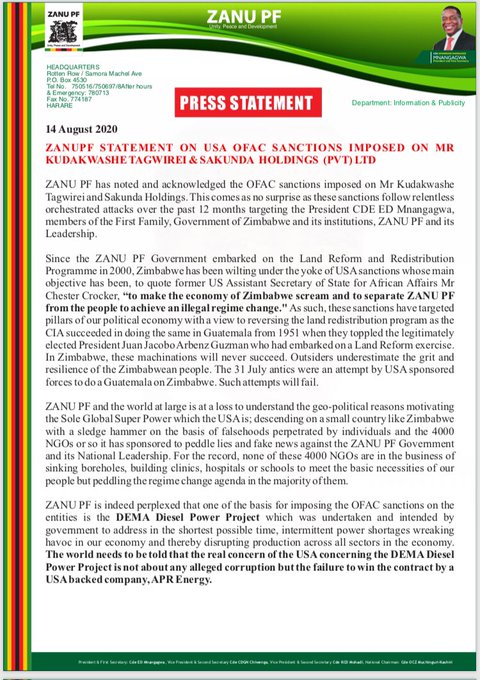 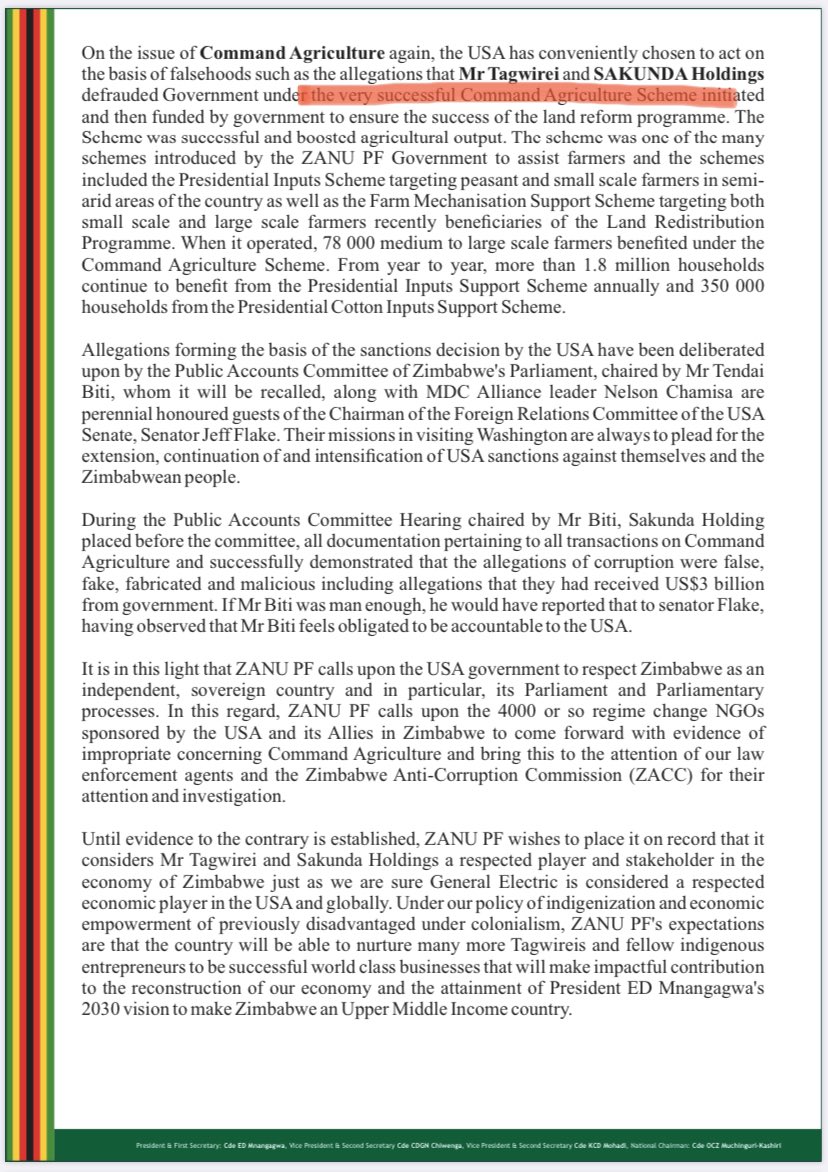 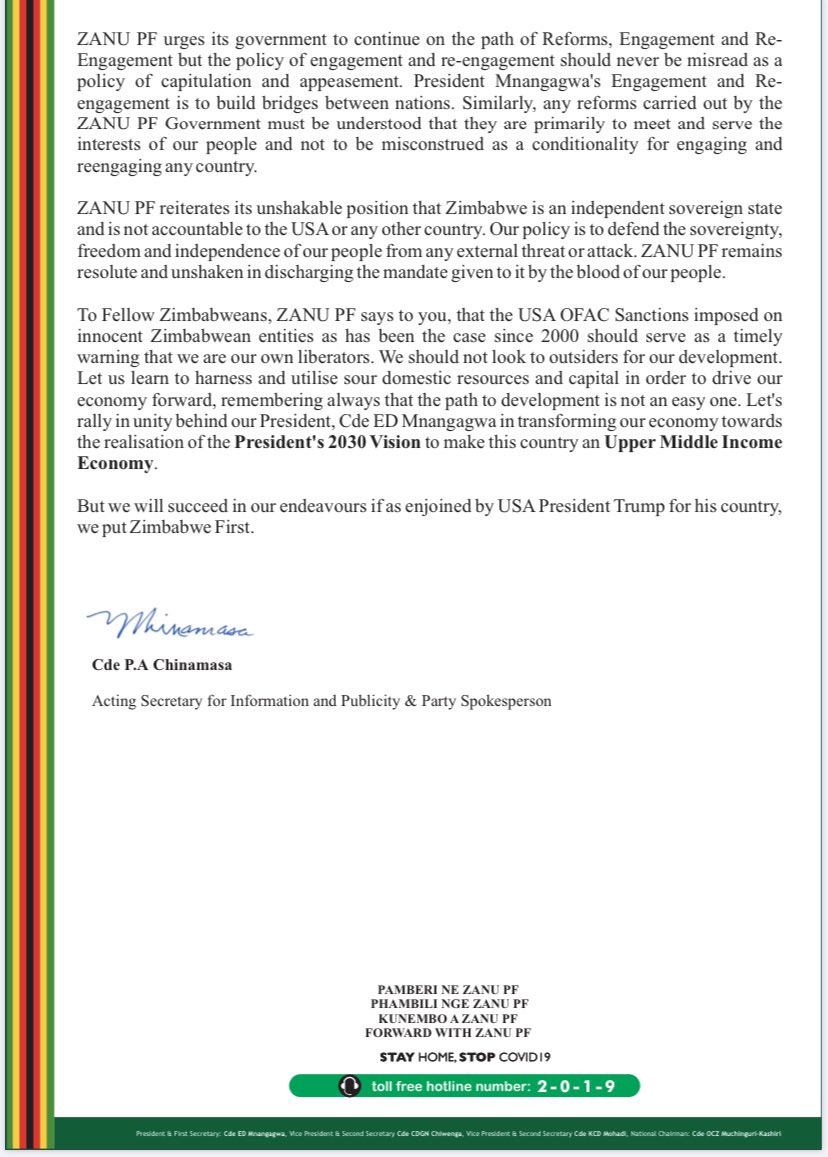