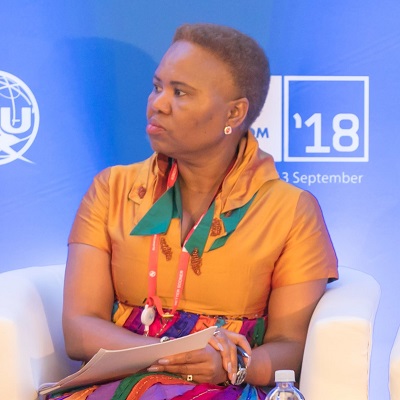 Posting on Twitter, Charamba accused Zulu of ignoring protocol by speaking publicly against the ZANU PF-led government during an interview with South African television channel, eNCA.

During the interview, Zulu said there is a political crisis in Zimbabwe, and there is a need to be frank and honest about the situation.

Charamba accused Zulu of trying to use Zimbabwe’s challenges, which he argued are caused by sanctions, to build her personal profile and name for international appointments. Charamba said:

CDE LINDIWE ZULU, Chairperson of the ANC’s international relations committee, is quoted in today’s press as calling for “honest and frank” discussion on the situation in Zimbabwe.

Cde Lindiwe Zulu has been long enough in Govt to know the provenance of Zimbabwe’s woes, namely woes related to Western illegal Sanctions against Zimbabwe over Land Reforms.

Even the UN Secretary-General recently spoke against those illegal sanctions. All these developments are within the purview of the committee she chairs.

Secondly, there were various initiatives between Zimbabwe and South Africa meant to help Zimbabwe neutralise the impact of illegal western sanctions against Zimbabwe.

Such initiatives trace back to days of First Republic. The sad truth is that all those initiatives fell flat on the floor as vested interests in South Africa would not allow solidarity between Zimbabwe and South Africa.

One is thus hard-pressed to understand what assistance South Africa can render to Zimbabwe now, more so given her own challenges presently, when she could not assist Zimbabwe when she had the capacity to do so.

A follow-up extraordinary summit was held at which all Sadc countries implored South Africa to share opportunities for industrialization for balanced growth and development.

In the interest of frank and honest discussion, Cde Zulu should acknowledge that the phenomenon of migrant labour is not a bilateral one between Zimbabwe and South Africa.

To the contrary, it is a deeply embedded structural defect involving all Sadc countries and nationals who gravitate towards where raw materials from their countries end up!!

Again, I am not sure the ANC govt can do anything about that. Or to imagine that creating a GNU in Zimbabwe – a very foolish proposition which is entertained by some elements in the ANC – will change that structural deformity.

Not even an ouster of Zanu-PF would change that. Relatively speaking, Zimbabwe is a lot better by way of the level of industrialization in relation to other SADC countries.

And with projects which are underway, very soon Zimbabwe should be able to peep at South Africa as an alternative industrial hub. The western world is aware of this and is doing its damndest to stop that from happening. Of course, they will fail.

What Zimbabwe will not countenance are career politicians from elsewhere who seek to use Zimbabwe and her sanctions-related challenges to build personal profiles and names for international appointments. That would be blatantly cynical and very unfriendly.