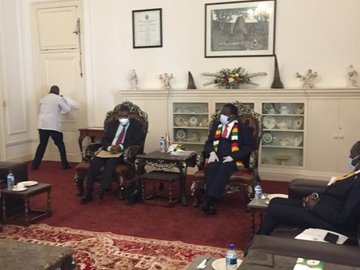 South African President Cyril Ramaphosa’s three envoys to Harare met President Emmerson Mnangagwa at State House on Monday on their mission to ascertain what is happening in Zimbabwe.

He is accompanied by former Speaker of Parliament Baleka Mbete and former South Africa’s Minister of Public Service and Administration Advocate Ngoako Ramatlhodi.

Speaking to State media after meeting President Mnangagwa, Dr Mufamadi said they will first report to President Ramaphosa who will then interact with the public at the appropriate time. He said:

We exchanged views with his counterpart President Mnangagwa. In other words, we were listening to the state of the situation, what is being done or the intentions to do extra things and so on.

We are not going to respond for our President through the media. We will be reporting to the President first, who will then interact with the public in due course.

Information, Publicity and Broadcasting Services permanent secretary Nick Mangwana insisted that there is no crisis in Zimbabwe.

South Africa’s Ambassador to Zimbabwe, Phakhama Mbete, had earlier requested MDC-T acting president Thokozani Khupe and MDC-A president Nelson Chamisa to meet the envoys but later informed them that the meetings will not take place without giving reasons.

One Comment on “South Africa’s Envoys Quiet On ED Exchange”