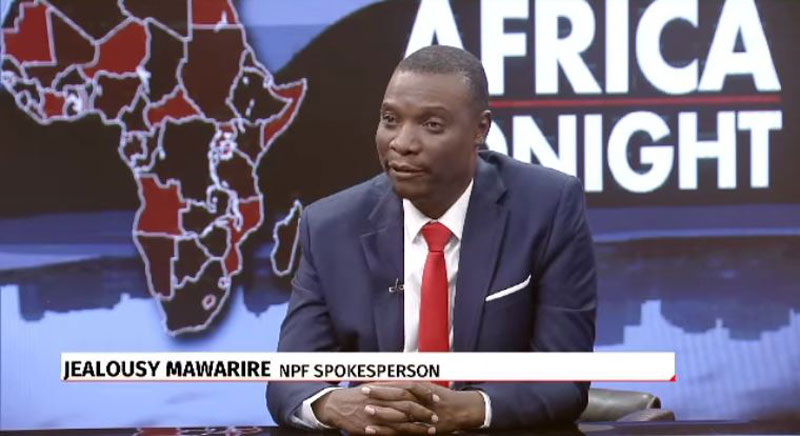 Spokesperson of the National Patriotic Front (NPF), Jealousy Mawarire, says South African President Cyril Ramaphosa’s envoy to Zimbabwe should engage all stakeholders, including the military, for the country to find a lasting solution to its perennial governance issues.

Mawarire believes that Zimbabwe’s security services have been deeply embedded in the country’s politics, and their involvement has sadly been sucked into the ruling ZANU PFparty’s factional politics, a development that may have dire consequences for the motherland.

Engaging only the ruling party, the government and the discredited Political Actors Dialogue (POLAD), the South African government envoy will be skirting around the real cause of the challenges facing Zimbabwe. Writes Mawarire:

Hopefully, President Cyril Ramaphosa and the ANC will understand that we need to dialogue with the army which took over Zanu-PF, the State and Govt. If we don’t, a worse situation will explode, especially now, that there are two militarized factions in Zanu-PF dabbling in politics.

The preeminence of both Zanla and Zipra military wings in Zanu-PF, the State and Govt is a dangerous situation for national security, peace and stability and the sooner the military issue is addressed, the better.

If we turn a blind eye to the fact that the military involvement in our national politics is the elephant in the room, we are likely going to go back to 1983-87, albeit, on a national scale.

It is clear the military factions in Zanu-PF are fighting to control the country and this fight will surely turn bloody if not addressed now.

The South African government and President Ramaphosa might ignore this but it’s a serious issue. Imagine if the ANC was controlled by Umkhonto Wesizwe fighters in SADF and govt, identifying themselves, predominantly, as either ANC or SACP, and these were fighting among themselves?

There is no hiding from the fact that Zimbabwe is under overt military rule and a security state after the 2017 Nov coup. President Ramaphosa and the South African government know it well, especially after, Isaac Moyo, who was Zim ambassador to SA, was brought back into security service as CIO Director Gen and Gen  Elson Chimonyo, who, prior to the coup, was purportedly retired, and was Zim Ambassador to Tanzania, but was brought back into security service as Zimbabwe National Army Commander.

There was the opposite movement of Gen Chiwenga, Major Gen SB Moyo and Air Marshal Perrance Shiri and others, into Zanu-PF and govt, either as Vice Presidents, Ministers of govt or permanent secretaries in key ministries.

These security chiefs, whom we are told, are retired, might not be retired after all, as seen by their predecessors, e.g. Isaac Moyo & Gen Chimonyo who, after, purportedly ‘retiring’ and serving in govt in the ministry of foreign affairs as ambassadors, returned into security service as CIO Director General an ZNA Commander respectively. We have seen even journalists moving from the army to the national broadcaster, ZBC, and back to the army.

This fluidity of movement between the army, state and govt by some key military personnel betrays the capture of both Zanu-PF and key state institutions by the army which is a major destabilising factor in competitive politics and govt since those with both their legs in the army and politics end up using the army in politics, governance and national policing.

It is no secret that armies, the world over, operate on commands, and it is not a surprise that our govt, which has been militarized, operates on commands, that’s why we have COMMAND agriculture, Command policing where soldiers have been deployed to do policing duties since 14 Nov 2017 when the coup was set in motion.

There can be excuses now that other countries, in light of the Covid-19 pandemic, have deployed their armies to help with policing services, but for Zimbabwe, soldiers have been on the streets since Nov 14 2017, that’s why they are accused, by the Mothlante Commission, of killing civilians on 1 August 2018 in the streets of Harare. They are also accused of many atrocities related to Jan 2019 demonstrations.

So when President Ramaphosa and the South African government send in envoys to Zim, this is the situation obtaining on the ground. Some might talk of “a crisis of legitimacy” and situate the crisis in the form of stolen elections but they don’t present a clear picture of who stole the elections.

Ignoring the role of the army in the 2018 elections is fatal since the reasons for the coup, provided by the Command Element of the army, had everything to do with the takeover of power and its consolidation through a 2018 election that the army participated in under a Zanu-PF facade.

It is no longer a secret that the army took over Zanu-PF, govt and the state for the sole reason of retaining Zanu-PF, and consequently themselves, in power after the July 2018 elections.

The world, SADC, AU and UN ignored cries against a coup in Zimbabwe in 2017 but now a lot of the global citizens can’t fathom its consequences playing out through the brutalisation of Zim citizens hence the significance of the #ZimbabweanLivesMatter movement.

Political players outside Zanu-PF, POLAD and the military barracks, should all be engaged to get a full view of the crisis. The army has to be engaged without fear to discuss ways of ensuring military people stop dabbling in civilian and partisan politics.

The days of Zipra and Zanla are long gone. We can’t continue using guerilla tactics in modern-day politics and pretend that we are building a modern democracy regardless of how many times fallacies of building a modern economy by 2030 are repeated.

Modern economies and dispensations are not built through guerilla tactics necessitated by the colonial imperial structures of the 1960s and 1970s.

A new Zimbabwe cannot be built through replication of the colonial administrative modus operandi of trampling upon the rights of our citizens.

The use of the army to stifle dissent is the biggest challenge Zimbabwe faces today. It is a problem that SADC intervention failed to address in 2008-2009 when the army, again, brutalised citizens to overturn an electoral result that didn’t favour Zanu-PF.

Same events played out loud in Nov 2017 when the military used force to avoid an internal power exchange in Zanu-PF that didn’t favour its so-called Command element, effectively mudding the 2018 electoral environment that it’s pointless talking about it’s compromised outcome because it was always obvious that, as then Masvingo Minister of State, Josiah Hungwe, correctly predicated, “ED will shoot to stay in power”.

True to Hungwe’s words ED shot civilians on August 1, 2018, to stay in power and even former SA President Mothlante’s Commission, attest to this reality.

Zim has vast gold deposits, lithium, diamonds, chrome, coal-bed methane gas it can supply the whole of Africa for more than 50yrs on top of agricultural land we grabbed from our erstwhile colonizers, our people shouldn’t be hungry.