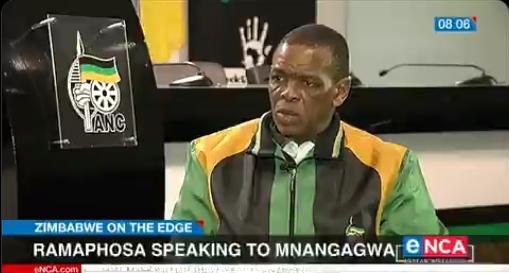 ZANU PF takes strong exception to the utterances that have been attributed to Cde Ace Magashule, the Secretary-General of the ANC where he appeared hoodwinked by those seeking to destabilize Zimbabwe through peddling social media falsehoods.

As a revolutionary sister, it has never been in our tradition to censure a fellow revolutionary movement or Leaders using megaphone approaches, more so when such utterances are misinformed and baseless, to say the least.

Appearing on an interview with eNCA, Cde Magashule said in response to Fake News alleging brutality, “We have talked to some of the people who were exiled from Zimbabwe, who ran away from Zimbabwe, we have interacted with them, we know their story, we have heard them. What we see there on Television is uncalled for …. and that Zimbabwean Lives Matter.”

We note that this is not the first time when a senior ANC leader has sought to speak like Zimbabwe’s prefect in similar fashion Cde Lindiwe Zulu’s similar utterances in 2013.

ZANU PF categorically states that Cde Magashule’s utterances were completely out of order. For the record, there is no brutality of whatever form happening in Zimbabwe but enforcement of LockDown regulations in line with recommendations by the World Health Organisation and our Ministry of Health and Child Care, and what has become common practice on #Covid19.

Secondly, there is no Zimbabwean who was exiled to South Africa by our Government nor the Party. Referring to fugitives of justice who escaped this country to find a safe haven in South Africa as exiles, when they dodged various corruption crimes committed during the previous administration is not only hypocritical but absolute hogwash.

To find, therefore, a person of the stature of the Secretary-General of the ANC making such deplorable utterances on the basis of old videos some of which have been imported from situations outside Zimbabwe but attributed to Zimbabwe in the past, being resurrected by keyboard activists is an embarrassment not only to himself but the organisation he represents.

It is in this light that we have seen on social media, videos of South African soldiers beating their non-compliant citizens using fists and sjamboks while in some regrettable circumstances, we have seen them spraying rubber bullets on their citizens resulting in serious injuries and deaths, to the extent that it has been reported that members of the SANDF killed 8 citizens in the streets during enforcement operations. ZANU PF has not uttered a word in public.

We have watched Marikana Massacres that remain unprecedented since the turn of the millennium by government forces but we have sought to respect South Africa’s capacity and right to deal with those matters internally.

We, however, are taken aback by these latest irresponsible utterances by Cde Magashule, who by all means should have sought clarifications from his counter-part Cde Dr Obert Mpofu, the Secretary for Administration for ZANU-PF.

Honestly, for Magashule to rely on a fortune-seeking organisation like Tajamuka or faceless social media posts on matters of Zimbabwe is disturbing as it is shocking.

We have seen our people being victims of systematic xenophobic attacks with some ANC leaders spreading hostile messages that worsened those attacks against our people but we have sought to address that using the normal diplomatic channels.

ZANU PF has also seen reported issues of rampant corruption allegations against various ANC leaders, where Cde Magashule himself has been implicated, not mentioning the Gupta’s yoke that hovers around his neck and shortened President Zuma’s term of office but we have not sought to interfere on such issues which are foundationally internal by all standards.

The Nkandla-gate came and ended with re-payments without Zimbabwe uttering a single word, knowing fully well that our brothers and sisters in the ANC are capable of handling their own internal matters.

This we have done, in the spirit of respect for states’ sovereignty in dealing and handling internal matters whenever they arise.

ZANU PF is extremely disappointed that Cde Magashule has sought to become a collusive player in support of those working to undermine this Republic and its constitutionally elected government.

ZANU PF is extremely disappointed that as secretary-general of a sister revolutionary party keeps company with fugitives from justice.

We remind Cde Magashule, that the ANC is pretty aware of the standoff between Zimbabwe and the USA and its allies following our successful land reform program which has seen the US and its allies imposing illegal sanctions on this country.

We also bring to his attention that the USA has earmarked and primed this pandemic to increase its onslaught on our people and their government, having falsely caused regrettable publications that Zimbabwe’s government was hiding Covid19 causalities despite us releasing statistics daily.

We further bring to his attention, the fact that the USA is now running a variety of media houses, faceless twitter accounts and paid journalists for the sole purpose of demonising this country and its leadership in its desperate attempt to bring about illegal regime change.