The Zimbabwean government has reportedly moved to criminalise criticising the governing ZANU PF a development that has been viewed by some as a way of silencing the opposition.

Honourable Vice President K.C.D. Mohadi, as Chairman of the Cabinet Committee on National Peace and Reconciliation, presented Recommendations from the 2018 And 2019 Annual Reports of the National Peace and Reconciliation Commission, which were adopted by Cabinet. The Vice President will present the recommendations to Parliament in due course as required by the Constitution.

Highlights of the recommendations include the following:
a) that legislation and a Code of Conduct will be put in place to regulate the operations and conduct of all political parties;
b) that campaigning against one’s country shall be legislated at law and criminalised;
c) that existing laws shall be strengthened to include elements that foster tolerance, equality and social cones, among Zimbabweans as wee as well as prohibit hate speech by public officials, media houses and citizens in public spaces and social, pant and electronic media platforms.

d) that the public should be educated on the Security Services’ complaints handling and feedback mechanisms;
e) that the development of the Witness Protection DA be expedited; and
f) that historians will be resourced to document inclusive storylines that reframe and capture agreeable narratives about ZImbabwes history.
Everyone is so focused on B) and C) but I’m being told A) and F) are carrying an even more nuanced and equally atrocious and sinister motive. A) Code of conduct for political parties will target mostly foreign engagement (penalties for opposition leaders of any party openly criticizing ZanuPf “Govt” internationally & lobbying for sanctions). It will also target foreign funding and donations to opposition political parties; and any opposition party meeting foreign envoys will soon require approval and clearance of Ministry of Foreign Affairs before engaging…… 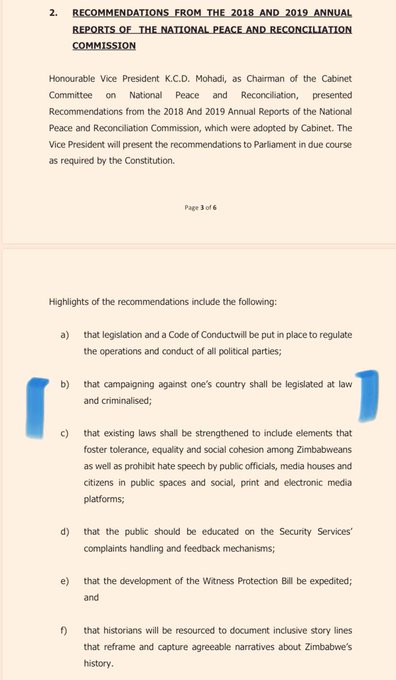 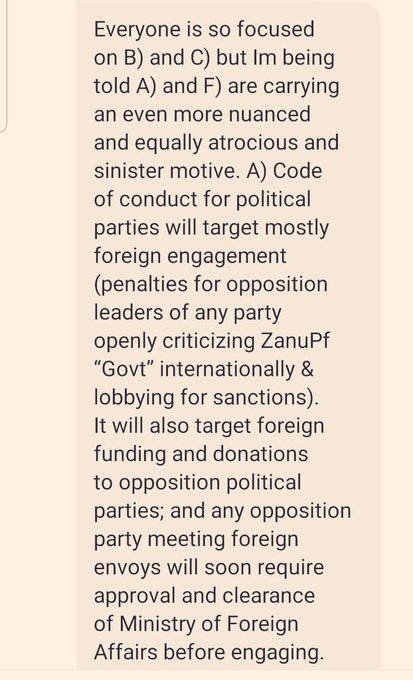 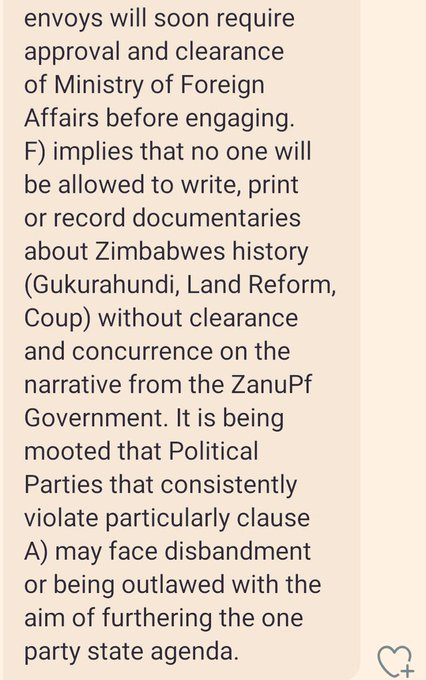