Tawanda Muchehiwa, the nephew of ZimLive editor Mduduzi Mathuthu is reportedly in bad shape after he allegedly was abducted and tortured for three days by suspected state security agents.

Muchehiwa was kidnapped on the 30th of July a development that came after police had raided the home of Mduduzi Mathuthu and seized the journalist’s sister.

Mathuthu is said to have gone into hiding after police officers produced a search warrant bearing a wrong address.

We present below Muchehiwa’s medical diagnosis.

To whom it may concern

Tawanda Muchehiwa 22 years old male patient presented with a history of painful back, abdomen post-assault by a wooden Iog. Also history of being sprayed an unknown substance all over the body.

On examination of note, the patient had extensive bruising of both buttocks, marked more on the right side with deep induration signifying huge subcutaneous tissue damage.  A laboratory test (urea and electrolytes) has shown functional loss of the kidneys secondary to tissue breakdown products from the trauma. An USS has also confirmed left kidney laceration which is structural damage to the kidney.

Currently, the patient is on fluid challenge to flush toxins out of his body, plus analgesia and antibiotics. He is still to undergo haemodialysis and more advanced tests to see the extent of the kidney damage. 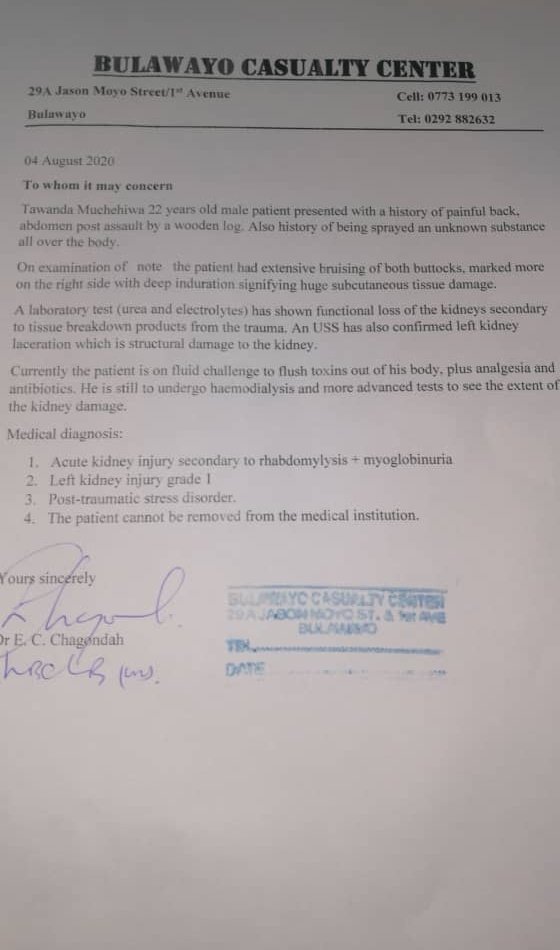