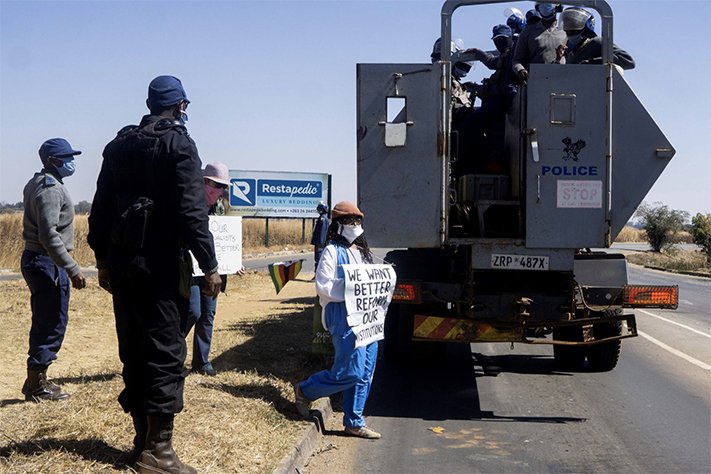 Zimbabwean novelist Tsitsi Dangarembga, centre, and a colleague Julie Barnes hold placards as they are arrested on July 31, 2020 in Harare. (ZINYANGE AUNTONY/AFP/GETTY IMAGES)

World-acclaimed author and filmmaker Tsitsi Dangarembga, MDC Alliance national spokesperson Fadzayi Mahere and five other protestors were granted a $5 000 bail each by a Harare magistrate on Saturday.

They were facing two charges of participating in a public gathering with intent to promote public violence, and contravening the Public Health (Covid-19 Prevention, Containment and Treatment) Act for participating in peaceful protests on Friday, 31 July 2020.

The seven were arrested separately in Avondale, Groombridge, and Borrowdale. The charge sheet read:

The accused persons were seen demonstrating and placards were recovered. There are witnesses who will testify and give evidence to the effect that accused not having been exempted to carry out any movement within the national lockdown period, did so.

Meanwhile, the Zimbabwe Lawyers for Human Rights (ZLHR) in Bulawayo has secured the release of Panashe Vongai Sivindani on $2 000 bail.

Sivindani, who is a third-year student at the National University of Science and Technology (NUST), was arrested on Friday for staging a lone anti-corruption demonstration at a TM supermarket. She has also has been ordered to report to police once a week.

Mahere, Dangarembga, 7 Others Granted $5 000 Bail Each