The Economic Freedom Fighters notes the announcement by Emmerson Mnangagwa. the president of Zimbabwe, that his government has taken a decision to compensate the British occupiers of Zimbabwean land who lost their illegitimate rights to Zimbabwean land through the fast track land reform programme.

Mnangagwa announced that they had secured S3.5 billion to pay to British settlers for the loss of ‘their lane. through the Zimbabwean land reform programme. and hopes that this will bring Closure to the instability brought about by the forced return of Zimbabwean land back to Zimbabwean people. We are of the firm view that Mnangagwa is either deeply misinformed about the real causes of the crisis in Zimbabwe. or is simply catapulting to the pressure from the white supremacist world. Either way, the treasonous act of paying to white settlers money that Zimbabwe does not have will not resolve the crisis in Zimbabwe. which is essentially a political crisis resulting from years of mismanagement. at the centre of which Mnangagwa features prominently.

It must also be noted that the push for the repossession of the land In Zimbabwe was not initiated by the State. At the time Zimbabwe gained its independence, the framework for land reform was premised on a market-led land reform programme whereby the State. with the assistance of Britain, was required to purchase land from white landowners for land redistribution purposes. This was based on the 1980 Lancaster Agreement, which provided that the government would not engage in compulsory land acquisition and that land distribution would take place subject to the principle of ‘willing buyer. willing saner’, whereby the government would ‘pay promptly adequate compensation’ for property.

When this failed to return Zimbabwean land back to Lmbabweans. it was the ordinary person on the street, together with war veterans, who started forcefully taking back their land in Zimbabwe. This action found a willing political leader in the form of a resolute and ideologically clear Seeder in President Robert Mugabe.

Mnangagwa is now not only pissing on the graves of the many heroic men and women who laid down the lives for the return of Zimbabwean land. but he is also desecrating on the legacy of Robert Mugabe. from whom he violently took power in an unprincipled coup. This action IS a Serious blow on the idea of decolonisation in the continent. It is reminiscent of the forced debt France imposed on Haiti when the Haitians liberated themselves from slavery. wherein France demanded payment for loss of property.

The crisis in Zimbabwe is as a direct consequence of the political ineptitude of the ruling elite there. their deeply embedded cronyism. and their insatiable desire for theft of public funds. It has been proven time and again that ordinary Zimbabweans who got the land as a result of the fast track land reform programme are actually working the land. and producing at levels that would be much higher if there was a targeted support programme from the State.
Mnangagwa will be remembered as a clueless, ideological amoeba who was prepared to trade oft important gains of the struggle in order to be liked by whites. We deeply condemn this act of betrayal by Mnangagwa. and call on ordinary Zimbabweans to reject this wasteful use of money that should be directed towards building hospitals in Zimbabwe. 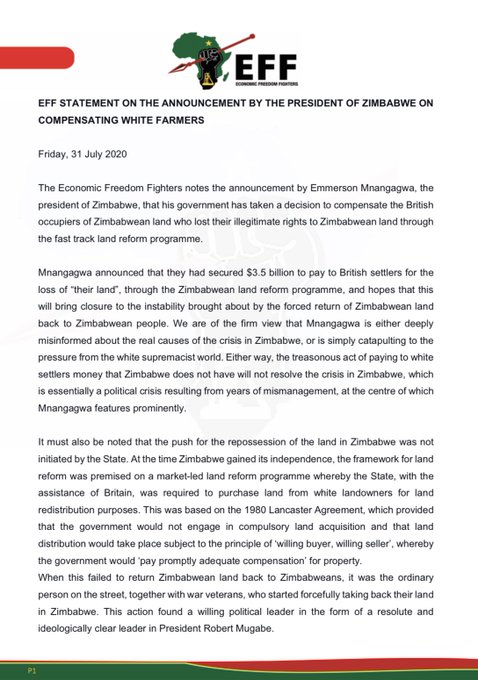 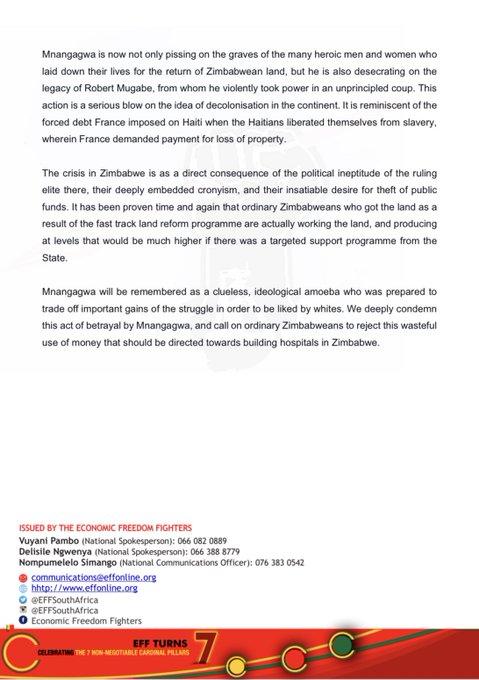