The opposition MDC Alliance has said its operations are guided by principles of good governance including accountability and transparency.

In a statement by the party’ spokesperson Fadzayi Mahere, the party denied the involvement of party officials in Harare City Council’s operations.

The statement is issued amid allegations that some officials including party leader Nelson Chamisa and Secretary-General Chalton Hwende participated in the local government’s land scam. We present the statement in full below.

As the MDC-Alliance, we wish to reiterate our commitment to the fight against corruption in light of the allegations being made within the Harare City Council. As a party that values integrity, we hold ourselves accountable to the ideals of good governance and the belief that all corrupt activities must be independently investigated. To date there has been no substantiated evidence that our officials have not conducted themselves in accordance with Council rules and by-laws.

We do not believe in immunity and impunity where a wrong has been committed.

We are also mindful of the temptation by the regime to weaponize the law for the purposes of retaliation in light of their recorded failure to pursue corruption cases over the past few months. We are aware of the selective application of the law as relates to COVID-19 tenders and other cases involving political elites. We remain opposed to the arbitrary arrests of people in order to investigate. We call on all allegations to be investigated in accordance with the law and in a transparent non-partisan manner. 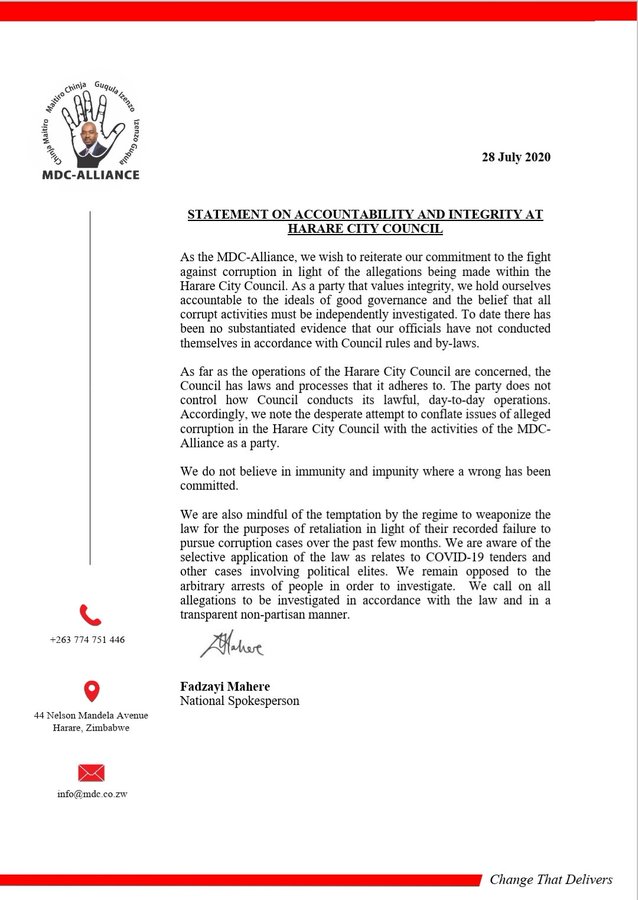