MDC Alliance officials on the ‘Police Wanted List’ have turned down the invitation by the Zimbabwe Republic Police to an “interview” saying the police’s behaviour was illegal and unconstitutional. We present the statement in full below.

We have noted with grave concern a letter published to the public and subsequently a televised publication on the national broadcaster authored by yourself. The publication unscrupulously purports that 14 activists, among them MDC Alliance youth leaders are WANTED for INTERVIEWS by your organisation’s law and Order Department. For the avoidance of doubt the names attended to on the said publication are:

We wish to state that we categorically object to your unwarranted behaviour in publishing or causing to be published the above-stated names on the national broadcaster and various social media platforms. This is tantamount to bad policing which is not anticipated in a 21″ century, modern Police Service.

Our youth leaders together with the other stated activists are not criminals or terrorists who deserve to be paraded on national and international platforms as criminals. All of our Leaders appearing on your list have attended to the Law and Order department on several occasions and your organisation has their contact details including those of their Defence Counsels. Your organisation never personally contacted them or their legal representatives but still went on to issue a WANTED publication against them.

In no uncertain terms, we wish to state that this behaviour makes your police Force complicit to tyranny and un-constitutionalism which stubbornly seeks to uphold what the late National Hero Edson Zvobgo once called, a socio-legal order in which people live under constant fear of police victimisation and abuse. Your Force’s behaviour in this regard is thus illegal, unconstitutional and abrogable. In as far as it is illegal and unconstitutional, we wish to state that your invitation to our leaders to attend to your uncharacterised interviews is in the same manner as your future illegal directives hereby DEFIED. 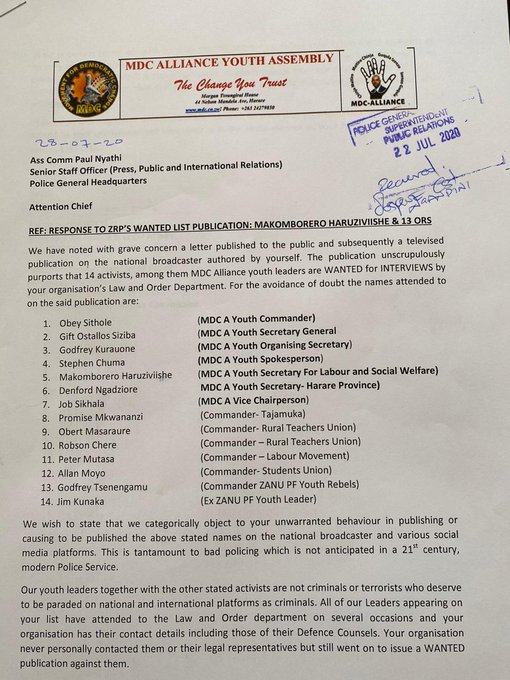 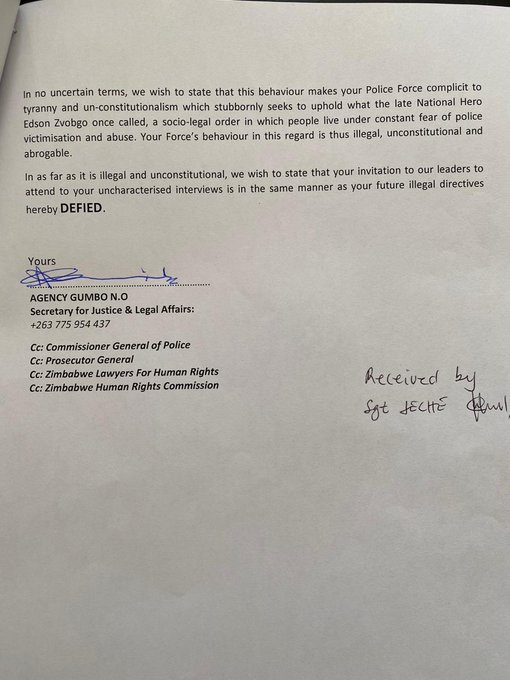