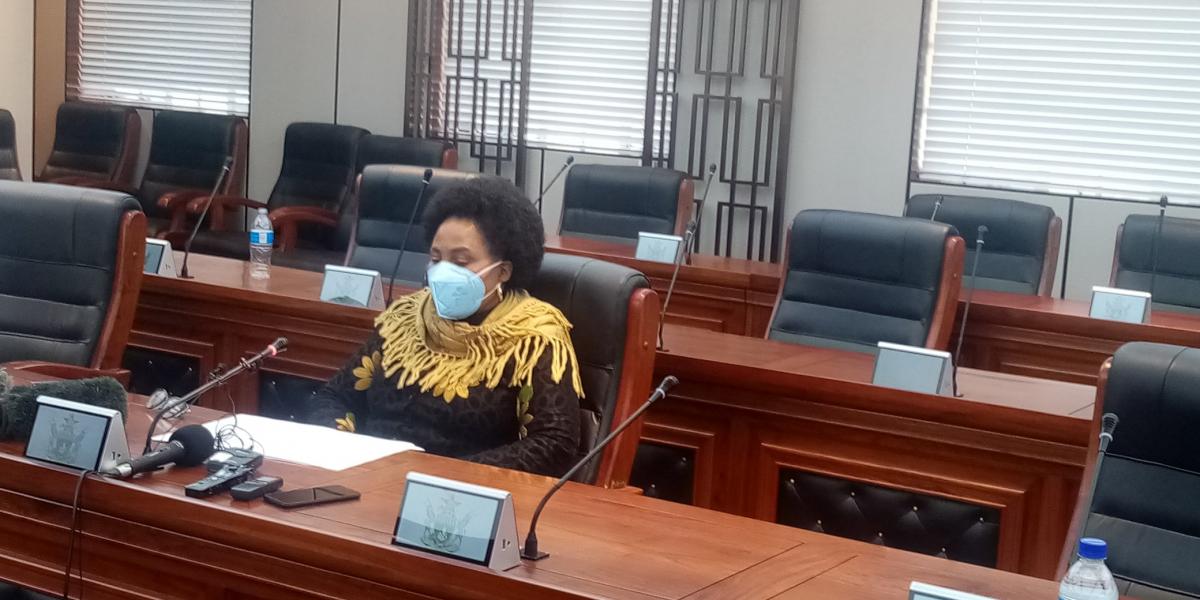 Social justice activist, writer, author, and speaker Tendai Mbofan writing for The Zimbabwean has said the government’s efforts to cover up flimsy accusations against Hopewell Chin’ono were exposed today at the press conference held by the Ministry of Information in Harare this morning.

What I love so much about the Zimbabwe regime’s live televised press conferences, and parliamentary debates, is the way top government officials shamelessly stutter, struggle, and outrightly fail to adequately articulate and provide undisputed and solid evidence for all the wild and largely laughable allegations they love spewing at every turn especially, against political, labour and social justice activists, who have been at the forefront of challenging the establishment’s gross and unmatched human rights abuses, state-sponsored violence, unparalleled corruption, and notorious economic incompetence, which have resulted in the acute, cruel, and untold suffering, starvation, and deaths of millions of Zimbabweans.

This morning, the Minister of Information, Monica Mutsvangwa when placed on the spot by renowned Al Jazeera journalist, Haru Mutasa – pathetically and shamefully failed to proffer any irrefutable evidence to back her administration’s long-held wild and ridiculous allegations that those leading in criticizing the heartless brutal government, were being sponsored by Western countries, to cause chaos in the southern African nation, so as to effect illegal regime change.

Mutsvangwa – who possibly over-estimated her persuasive touch had vainly tried to paint her administration’s obvious strong-arm tactics against perceived voices of dissent, as justifiable and necessary action against rogue elements, whose main agenda was to fulfill some Western countries’ apparently insatiable appetite to somehow oust the current ruling ZANU PF junta which, itself attained power through military intervention, and forced the sitting president, Robert Gabriel Mugabe, to unceremoniously resign.

When asked by Mutasa what evidence the Zimbabwe government had, to prove this link between activists, and Western powers, the best she could come up with especially, pertaining to Chin’ono was the whimsical ‘fact’ that, within minutes of the police reaching his home to arrest him, the US embassy, and other Western diplomatic missions based in Zimbabwe, were already issuing out statements condemning the arrest.

If this is what the men and women in power in Zimbabwe (most with doctorates) regard as incontrovertible evidence that those leading anti-government activities are being sponsored by Western countries then we are either being led by an insane group of people, or they have simply been finally exposed for their inexcusable lies and deception which, they have been unashamedly using in undemocratically crushing genuine pubic outrage and dissent.

I have personally always asserted that, being proven a local foreign-sponsored agent tasked with destabilizing his or her own country, or illegally removing a constitutional government is a very serious crime of treason, which can rightly attract up to life in prison, or even the death sentence (in some countries).

So, my never-answered question (for as long as I can remember) since all these nonsensical utterances by the Zimbabwe authorities, were started in 1999, when a real challenge to the ruling ZANU PF party was posed, through the formation of the opposition MDC party why has not even a single person ever been convicted for this grave offence?

In fact, the same so-called ‘Western-sponsored agents’ have also been repeatedly accused, by the administration, of having invited “crippling Western economic sanctions on Zimbabwe, that have caused the untold suffering of ordinary citizens”  another very serious treasonous crime…had the government actually had any irrefutable proof.

I have, similarly on numerous occasions called on anyone in possession of any proof, beyond any reasonable doubt, to kindly present it to me  but, as with the ‘Western-sponsored’ tag, no one has ever come forward with any thing worthy, save for the usual overly tired unsubstantiated allegations, that have been recycled over and over again, for the past two decades.

If there was any proof – that could hold up in a competent court of law surely, would these treasonous people not have been lock up for a very very long time by now?

In fact, why would the Zimbabwe authorities lamely sit back and fold its arms, if they had compelling evidence that there were some amongst us, who were being handsomely paid by foreign countries to “incite chaos and destabilize the country, in order to unconstitutionally remove the government” whilst, at the same time, inviting “crippling sanctions that have caused the untold suffering of ordinary citizens”?

If those in power in the country had such indisputable evidence – yet, chooses to do nothing about it, except making useless statements – then, they are ones who should be held responsible by the people of Zimbabwe for causing their suffering, through negligent of duty by this omission, or for being complicit?

On the other hand, if the authorities do not have even a shred of unquestionable proof as is quite evident to be the case then, the eversuffering, over-burdened, and poverty-stricken starving people of Zimbabwe, should finally wake up to the reality of their situation that, their untold misery is the sole making of their own government, which they should hold to account.

Quite frankly, should this not finally prove, beyond any reasonable doubt once and for all that these regime accusations are flimsy at best, and dictatorial at worst…which, it merely used to justify wanton oppression, repression, and subjugation of a people who have clearly had enough?

Zimbabweans should now wake up to the fact that, most of us who are fearlessly speaking out, and standing up for their rights and plight at our own great risk are doing so purely out of patriotism, and a genuine and unquestionable love for the people of this great nation…and, that working together – and by finally stubbornly refusing to be divided by the authors of our suffering, we can make Zimbabwe great again.