The Zimbabwean government, through a United States lobby firm, Mercury Public Affairs LLC, told the U.S. government to remove the sanctions saying the country is reforming.

Since his election in 2018, Zimbabwean President Emmerson Mnangagwa and his administration have been working diligently to achieve progress on a number of political, land, economic, and human rights reforms. While the pace and scope of reforms has been criticized by the U.S. officials and other international stakeholders, the positive steps the Mnangagwa administration have taken should not be overlooked. Thus far, the Zimbabwean government has signed into law:

• The Zimbabwe Human Rights Commission, created to be an independent human rights institution devoted to upholding the enforcement of human rights

• Approximately 20 new bills that align Zimbabwe’s laws to the constitution.

Legislation to address other key changes suggested in ZDERA has also been proposed and is currently passing through the parliamentary system.

Zimbabwe Anti-Corruption Commission (ZACCI President Mnangagwa has appointed an independent Head Commissioner to lead the revived and empowered Zimbabwe Anti-Corruption Commission (ZACC). He not only appointed a team with a history of fighting corruption, but also gave ZACC broad and deep investigative and arrest authority. The commissioners that were appointed by the President to ZACC represent a broad spectrum of political parties, NG0s, and private experts. Anti-corruption courts have been set up in 7 of the 10 provinces with the last three to be set up by April 2020. Magistrates for all ten courts have been appointed.

ZACC Head Commissioner Justice Loice Matanda-Moyo oversees a team of over 60 investigators is currently managing more than 200 investigations into corruption. The commission’s independence has been demonstrated by the following arrests:
• Zimbabwean Minister of Tourism Prisca Mupfumira —a close ally of President Mnangagwa —after a thorough investigation into potential corruption.

• ZANU-PF member and government Minister Joram Gumbo for criminal abuse of office. Gumbo was the first ZANU-PF party Minister to be arrested and was also considered an ally of President Mnangagwa.

The commission’s actions drew praise from U.S. Ambassador to Zimbabwe Brian Nichols, who has applauded its independence. The Zimbabwean government is also creating new legislation to protect whistleblowers in corruption cases.

There are so many cases moving to trials that there are not enough prosecutors. Justice Moyo is working to increase the number of attorneys in the Commission to proceed to trials. ZACC is also seeking prosecutorial authority from the Government in order to expedite the legal process.

Land Reform
Land reform was probably the single biggest driver of the original sanctions back in the early 2000s. It is little known that the government is currently negotiating with the farmers and that the first tranche of payments has already been made to them. Additionally, while some government officials have attempted to seize farms over the past year, President Mnangagwa has continued to demand that rule of law must be followed and has enforced High Court rulings to restore land to the proper tenants.

Evicted farmers continue to negotiate with the government for the next round of payments. In March 2020, the Mnangagwa administration gazetted new legislation under which former landowners can select to either repossess or receive monetary compensation for their old land. In announcing the legislation, Lands Minister Perrance Shiri stated, “the object of these regulations is to provide for the disposal of land to persons entitled to compensation for acquisition of previously compulsorily acquired agricultural land.”

A critical component for Zimbabwe is the implementation of new laws to enhance civil liberties and freedoms. To this end, the Mnangagwa government replaced the Mugabe-era Public Order and Security Act (POSA) with the Maintenance of Peace and Order Bill (MOPA). MOPA was gazette on November 15, 2019.
While there have been concerns the bill is not as strong as it could be, it rid the country of POSA and is a step towards legalizing the right to demonstrate. It also should be noted that while there was a tragic and deadly demonstration in January 2019, unlike many other countries in Africa, there has not been a single death during demonstrations since then, and indeed a marked decrease in any violence during opposition demonstrations.

In September 2019, the UN Special Rapporteur on Rights to Freedom of Peaceful Assembly and Association, Clement Nyaletsossi Voule, released an End of Mission Statement after visiting Zimbabwe. While pushing for more reforms, he noted several significant improvements in the MOPA Bill from Mugabe-era legislation. Voule supported the deletion of a provision related to the temporary prohibition of holding public demonstrations within specific police districts, as well as the addition of a provision giving the President — rather than the Minister of Defense — authority to deploy military forces to support the police. He also praised the Mnangagwa government for compensating victims impacted by a police crackdown following the August 2018 national elections and for creating an Inter-Ministerial Taskforce to lead political, electoral, and legislative reforms.

Additionally, another major reform bill, the Freedom of Information Bill, has been drafted to replace the Mugabe-era Access to Information and Protection of Privacy Act (AIPPA). Principles for the Freedom of Information Bill were approved in February 2019, the bill was gazetted in June 2019, and it is currently tabled before Parliament awaiting a vote once the Parliament is able to reconvene following an unscheduled recess caused by COVID-19. Once signed into law, the Bill will set new procedures for Zimbabweans to access government-held public information. In July 2019, UN officials praised the Zimbabwean government for introducing such legislation to replace AIPPA.

While Voule noted that additional reforms are still necessary, he stressed the 2013 Constitution provides a “sound and robust basis for the protection of human rights” and that international economic assistance is essential for Zimbabwe to continue making progress. To buttress these reforms, the Mnangagwa government has implemented approximately 20 new bills that align Zimbabwe’s laws to the constitution and made progress on resolutions to condemn previous atrocities and human rights abuses. The government has committed to finish aligning all laws to the Constitution by year’s end. Zimbabwe has also been making changes to improve freedom of the press in the country. There is a vibrant newspaper industry, and 5 out of the 6 major papers are either opposition-controlled or friendly to the opposition. These newspapers have websites and YouTube channels to disseminate their messages and reach the 80 percent of Zimbabwe’s population that owns a smartphone.

Additionally, in 2019 the government announced a Broadcast Licensing Board to grant radio and television licenses in Zimbabwe. The board is comprised of 12 members: 4 of whom are ZANU PF members and the other 8 who are independent. Currently, there is one official Zimbabwean government-controlled station—the Zimbabwe Broadcasting Corporation—but six additional broadcast licenses are to be granted this year. The public also continues to have full access to channels from other African countries, which carry news critical of the Mnangagwa administration and its policies.

Western observers of Zimbabwe have been rightly focused on allowing the Zimbabwean political opposition to protest freely. While the government’s response to January 2019 protests by the political opposition — temporarily shutting down the internet and engaging in conflict that result in 13 deaths — is condemnable, since then it has worked to minimize violence at such events. In fad, it requested and underwent training from the UN for its police force to learn how to peacefully monitor and handle demonstration events.

Additionally, there have been various demonstrations organized by doctors, teachers, and others that have been allowed and occur peacefully. The main issues in demonstrating center around the opposition party, the Movement for Democratic Change, or MDC.

Over the past year, we have seen positive, incremental reform towards protests. In August 2019, opposition protests resulted in 5 injuries and no military interference or internet blackout, and in November 2019 protests resulted in just one injury. In January 2020, the government permitted an opposition “Yellow Vest protest against tyranny and ‘illegal presidency,” which police monitored from a distance with zero interference or action. No injuries were reported.

Chinese and Russian Influence In Zimbabwe

Both China and Russia have historically experienced close relationships with Zimbabwe. However, there has been a recent escalation of tensions in the Sino-Zimbabwean relationship, as several Chinese companies have been kicked out of the country for environmental issues. Chinese companies have built the Victoria Falls airport and the new Zimbabwean parliament building, but Zimbabwe seeks to move closer towards the United States and its western allies. The Sino- Zimbabwean relationship remains strong because China offers Zimbabwe great access to capital that Zimbabwe cannot obtain from Western nations due to its position as a “blacklist” country and the sanctions imposed on many of Zimbabwean individuals.

While Zimbabwe has been devastated by a drought and hit by a cyclone, they are still attempting to right the economy with a series of reforms. They have been supported by both the IMF and World Bank in their work. Indeed, World Bank Senior Economist Stella Ilieva stated that while President Mnangagwa’s economic reforms have caused short-term increases in poverty levels, they will ultimately be successful if implemented according to plan.

Last October, The World Bank named Zimbabwe a “Top 20 Improver” in its annual Doing Business report. Economies are chosen based on the number of reforms and the improvement of their “ease of doing business” score. According to the report:

The Mnangagwa government has also made progress in implementing its Transitional Stabilization Programme (TSP), which will stabilize the economy to facilitate private sector-led growth. In June 2019, the Government reached four out of six benchmarks required by International Monetary Fund (IMF) as part of TSP reforms. Thus far, significant improvements have been made with regard to fiscal 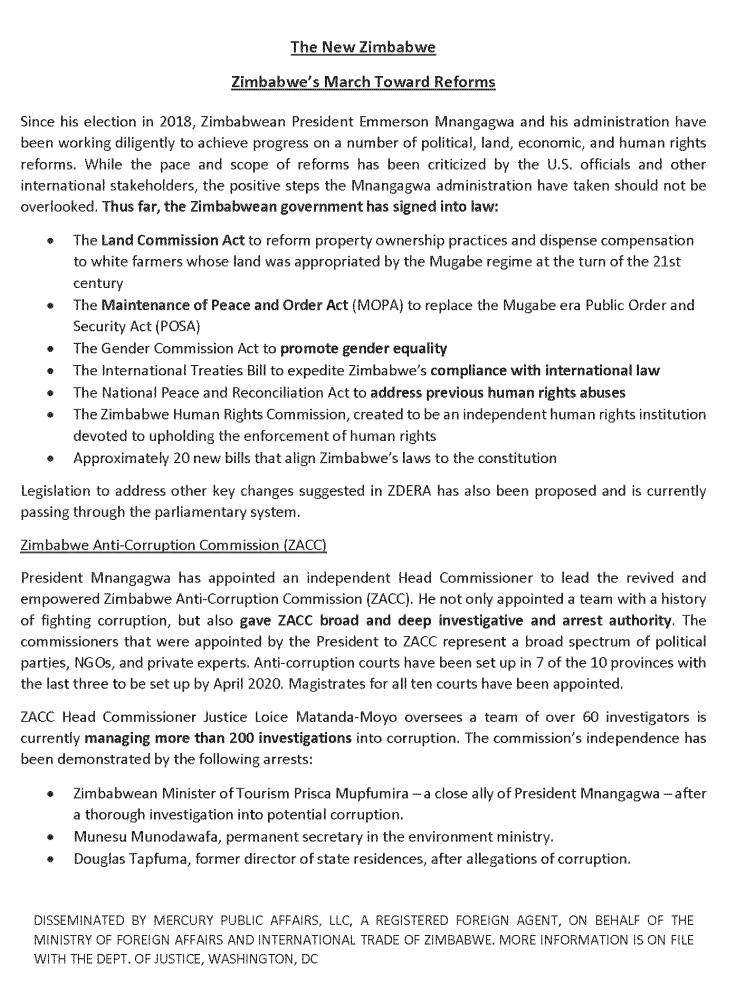 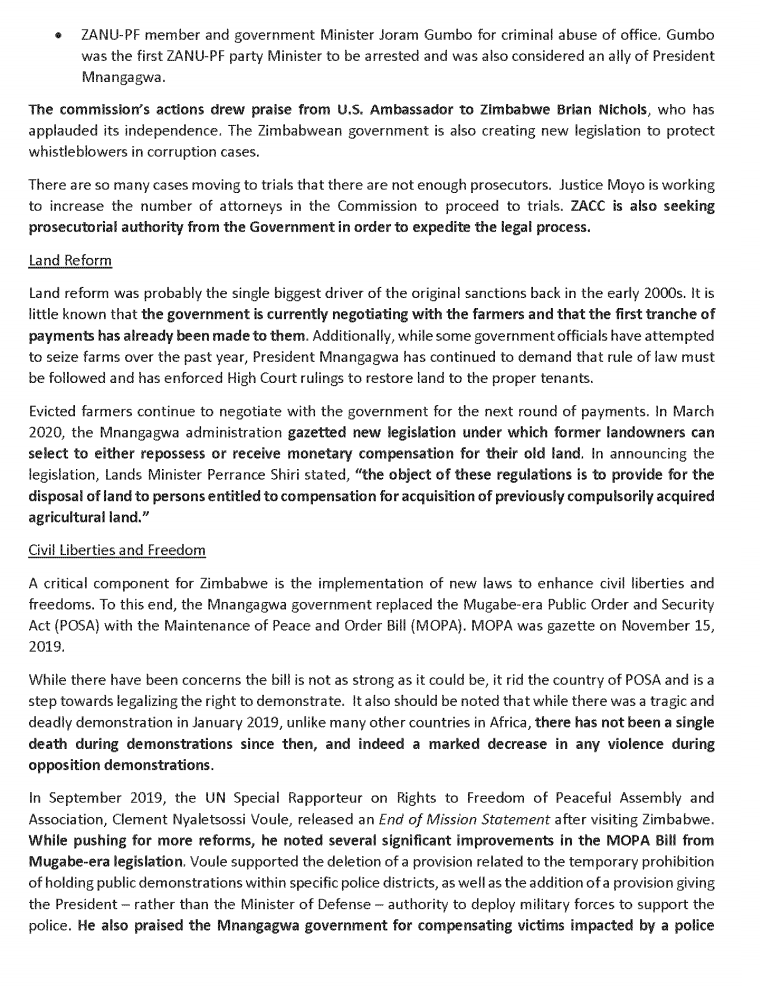 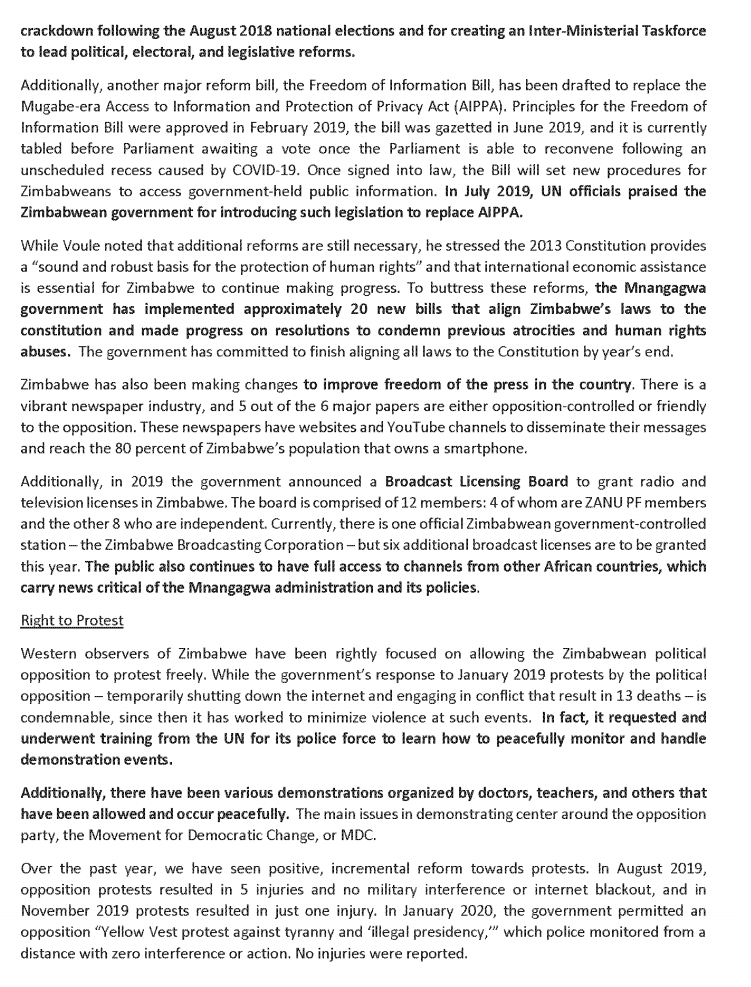 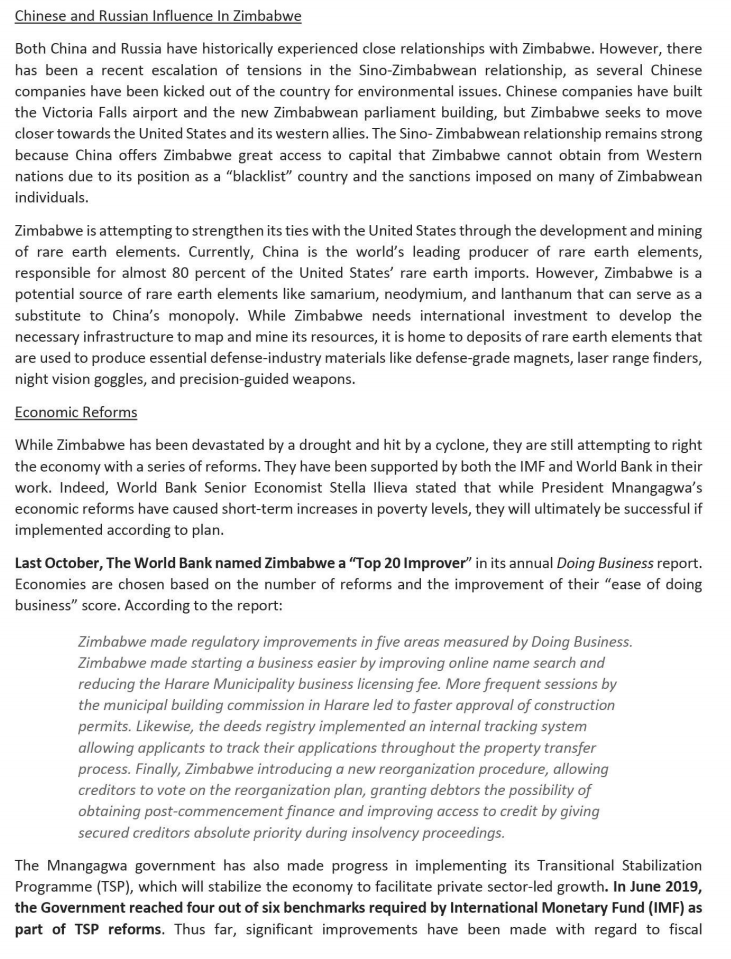