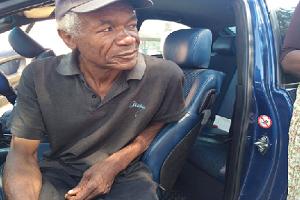 Stanley Chabvepi, who was the country’s deputy ambassador to Tanzania in the 1980s, died last week and was buried over the weekend at his rural home in Mufuka village under Chief Marozva in Bikita. He was 68.

Chabvepi was a deputy ambassador during the late former President Robert Mugabe’s era before he was recalled for reasons that have not been revealed to this day.

In 2010, Chabvepi, who was now visually-impaired, begged for food aid from Charles Ray, the then United States ambassador to Zimbabwe.

Ray donated a grinding mill and food to Chabvepi and other villagers.

Reports indicate that at the time of his death, Chabvepi was surviving on meagre rentals from the shops he inherited from his mother.

An MDC Alliance activist, Vincent Jaricha, described the late Chabvepi as a rare ZANU PF members who did not participate in violence against opposition party supporters. Said Jaricha:

Although he had his shortcomings, to us he was a level-headed Zanu PF member who never took political differences personally.

A Zanu PF political base in ward 11 was established at Joseph Mude (current Chief Marozva)’s homestead, a stone’s throw from his home, but he was not directly involved.

One Comment on “Former Diplomat Dies In Grinding Poverty”