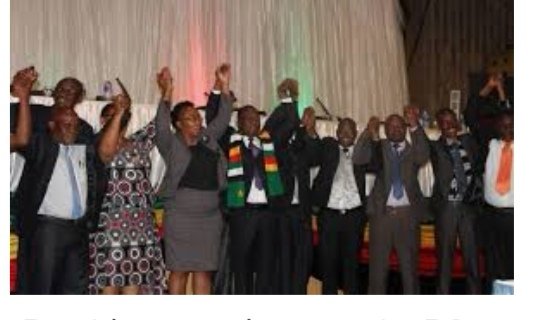 The party’s branch in China, MDC Alliance China, suggested that the NTA, however, should focus on the implementation of reforms which must precede 2023 elections.

Responding to a tweet by Jacob Ngarivhume, the leader of opposition Transform Zimbabwe, who had claimed that the Church and Civil society stood ready to facilitate the process of establishing an apolitical National Transitional Authority guide Zimbabwe in this desperate hour, MDC Alliance China said:

No NTA should go beyond 2023. We need elections just after electoral and security reforms. #zanupfmustgo. 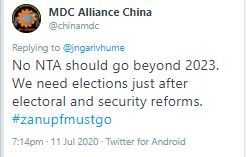 The government is claiming to be implementing the much-needed political, media and economic reforms as suggested by the international community, the opposition, analysts and human rights activists.

Critics, however, say there have been superficial reforms which are meant to hoodwink the observers into believing that the Mnangagwa led administration was committed to reforming.

Since 2017 when Mnangagwa took over from his late long-time mentor, Robert Mugabe, Zimbabwe’s economy has been on a downward trend while reports of bad governance and human rights violations have been on the rise.