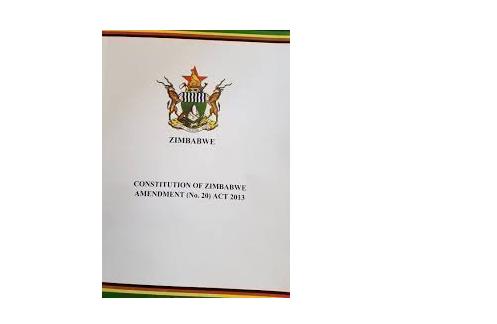 Concerned Zimbabweans, Activists Zimbabwe have started an online petition titled #NoToConstitutionalAmendments in a bid to try and stop the ruling party through its parliamentary majority from changing the constitution to suit their preferences.

In an intro to the petition, the petitioners detailed how the constitution amendment will affect the democratic space of Zimbabwe. The petition reads:

The 2013 Constitution was resoundingly supported by Zimbabweans in a referendum. This means it was enacted by a popular and participatory process.To amend it through a closed process would be a subversion of the voice of the people and such a step amounts to a grave democratic reversal. It is also important to note that Constitutions ought to be durable and not unnecessarily or repetitively amended to suit short term interests or designs. In this respect, this would be the second time the Constitution is being amended in its seven year lifetime. Such practices do not bode well for constitutionalism and the broader democratization process.

The first unpopular amendment in 2017 expanded the President’s powers to include unfettered judicial and executive appointments. If passed into law, Bill Number 2 will have the effect of farther undermining the principles of Separation of Powers and the Rule of Law. Clauses 2-8, 10, 13 and 14 will erode the independence of the judiciary and cutback on parliament’s oversight powers.

As young people, we are concerned that the Bill will stifle effective representation of our interests and participation in the quest for democratic governance, even though at face value it creates the impression of increased representation. The introduction of a youth quota in a country where well over sixty percent of the population is under thirty-five is evidence of the continued stifling of young people’s participation in public affairs and as such should not be supported.

The Bill further stifle effective women representation by institutionalizing tokenism through the granting of quotas to women. This serves to delineate how far women can participate even though at face value, it creates the impression of increased representation.

For these reasons, all democracy seeking Zimbabweans should sign, share and support this petition so that our country returns to and moves farther along the pro-democracy path.

The petition has already gathered momentum as over 2000 people have already signed it since it went live. To view the petition click here