The hearings started on Monday 15 June 2020 in several parts of the country. We present the party’s statement in full below.

STATEMENT ON FAST-TRACK CONSTITUTIONAL AMENDMENT PUBLIC HEARINGS
The MDC Alliance notes with deep concern that the Parliamentary Portfolio Committee on Justice, Legal and Parliamentary Affairs has proceeded to hold public hearings on Constitution of Zimbabwe Amendment No. 2 Bill notwithstanding protests from the public. We believe that respect for the Constitution is the bedrock of a strong society and that any Constitution-amendment process must be people-driven.

The public hearings commenced yesterday, the 15. of June 2020 and are scheduled to run until the 19. of June 2020. Initially, they were meant to run between March 29 to April 4, 2020, but the process was suspended due to the COVID-19 national lockdown. The lockdown remains at ‘Level 2′. It is yet to be lifted. This means that freedom of assembly is still greatly curtailed. The decision to fast-track the public-hearing process means that most people will not be able to attend the public hearings and make their voices heard due to restrictions on movement as well as the size of public gatherings. Section 328(4) of the Constitution requires that the public be given an opportunity to express their views on constitutional amendments and Parliament must provide facilities to enable them to do so. This decision is grossly unreasonable as it violates the citizens’ right to be heard and consulted in this important process.

The MDC Alliance maintains that Government’s focus should be on aligning laws to the Constitution as opposed to amending it. The proposed amendments entrench more power in the Executive and remove necessary checks and balances that are integral for the independence of the Judiciary and separation of powers. The proposed decoupling of the Zimbabwe Electoral Commission’s delimitation process from the population census leaves the former process exposed and vulnerable to gerrymandering and political abuse.

The attempt to amend over twenty clauses to the Constitution in such a fast-track manner confirms that if the Government had the political will to align laws to the Constitution, it would have done so. No changes should be effected to the Consitution until sincere reforms are implemented – including addressing the socio-economic crisis, the deteriorating human rights situation and the chronic scourge of corruption.

We demand that the Government implements the Constitution and carries out systemic political reform. We encourage citizens to continue to speak out and register their dissatisfaction with this clear violation of their rights. 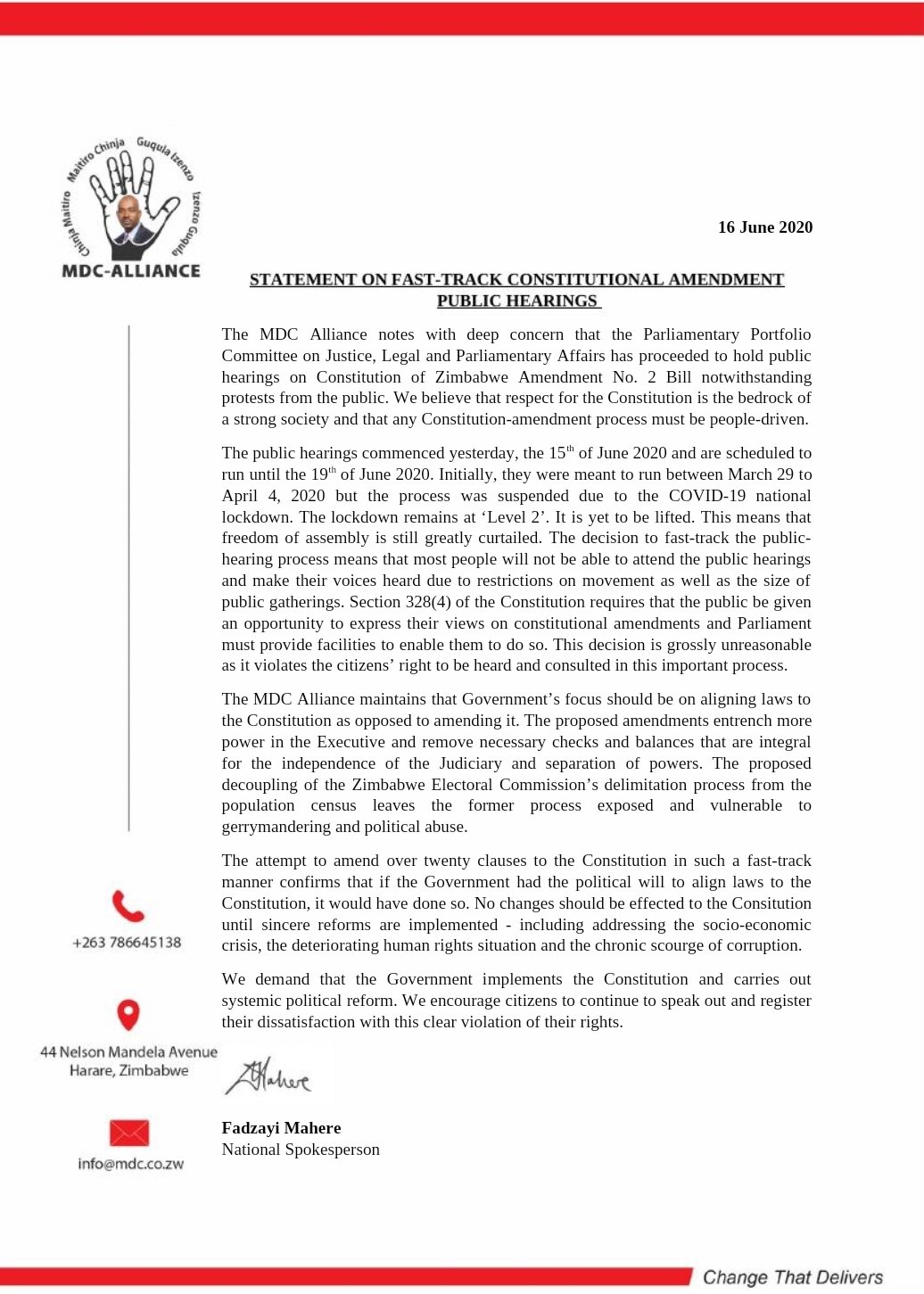