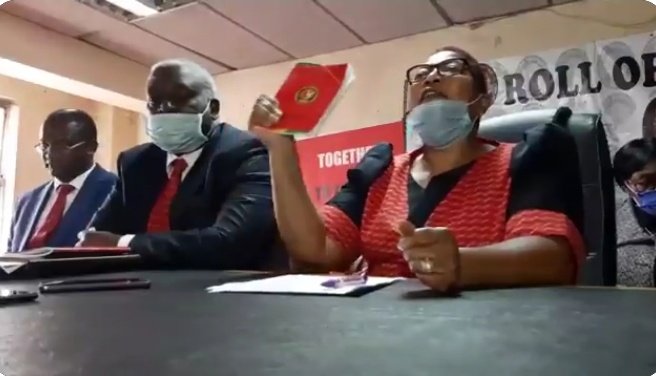 1] Some of us who come from the ghetto will always say:

The presser by MaKhupe and company was just empty rhetoric.

Everyone looks brave when they feel safe.

It’s only a matter of time when this charade will be exposed.

2] Its embarrassing desperation for MaKhupe to claim Leadership over 103 MPs when she has 2.

Even stupid people know that the MDC-T was rejected by voters.

That rejection cannot be cured by legal technicalities.

It’s even embarrassing for Mwonzora to be part of this madness.

To argue that she is to the MDC-T what JohnStenheisen is to the DA (South Africa’s Democratic Alliance) after the exit of Musi Maimane is a joke that’s not funny.

There was an undisputed Leadership succession in the DA.

4] Mwonzora exhibits dangerous desperation by saying the voters that Khupe has inherited where institutional.

The Khupe MDC-T got more votes than hers.

There were more spoiled votes than MaKhupe’s 45000

Chamisa got more votes than both MDC-T & MDC-A!

5] Its total hogwash to say by virtue of the Supreme Court Judgement, MaKhupe is now Leader of 103 MPs.

How many votes did the MDC get inside the ALLIANCE?

How do you conclude that the ALLIANCE votes belong to the MDC-T?

The people who voted for the MDC-A are being taken for a ride.

6] Mwonzora’s pathological lies camouflaged as political bravado should be exposed.

Forget about making a 40-year-old who allegedly almost burnt you in Humanikwa in 2018 YouthChair, who made up the 2014 MDC-T Standing Committee meeting quorum?

They cant be given a Leader they rejected.

They can’t be taken to POLAD by that same Leader.

She equally can’t preside over MDC-A in whatever form.

These embarrassing contradictions can’t be tolerated for 2 seconds.

8] But back to the fake bravado, the lockdown won’t last forever.

Its a matter of historic fact that Mwonzora last won any sort of election in 2008.

So did Mudzuri, Khupe, Komichi etc.

Noone is underestimating them.

They are just overestimating themselves.

How can they hijack their own party?

This “chinhu chedu” mgodoyi revisionist narrative of pushing Student Unions to the periphery, over the formation of the MDC in 1990 is pathetic.

It was formed by an ALLIANCE of bodies which included Labour, Students, Women, Churches, Civil Society, Farmers, Lawyers etc.

No one group can ever steal it.

The MOVEMENT belongs to all.

11] But it is to be expected that when individuals begin exhibiting political fatigue, they see colleagues as enemies.

Those who have nothing more to offer except seniority should retire & leave the Leadership to a new generation.

The MOVEMENT can’t belong to one generation.

12] The MDC of Chamisa should multi-task.

Push back whilst pushing forward.

The supporters cannot leave their battles to courts & boardroom meetings.

They have been left quiet for too long.

Political dwarfs in long robes have made enough noise.