STATEMENT BY MEMBERS OF THE SOUTHERN AFRICAN CHIEF JUSTICES’ FORUM ON THREATS TO JUDICIAL INDEPENDENCE IN MALAWI AND STEPS TAKEN AGAINST THE CHIEF JUSTICE OF MALAWI, JUSTICE ANDREW K. C. NYIRENDA, SC

As leaders of the judiciaries in our respective countries and as members of the Southern African Chief Justices’ Forum (SACJF), we are deeply concerned about the recent developments in Malawi which appear to undermine the independence of the judiciary and individual Judges.

On Friday 12 June 2020, the Malawi Government’s Chief Secretary issued a notice purporting that Chief Justice Nyirenda had been placed on leave with immediate effect. The notice reads as follows:

`Government wishes to inform the general public that the Right Honourable Andrew K. C. Nyirenda, SC, Chief Justice of Malawi, will proceed on leave pending retirement with immediate effect. The Honourable Chief Justice has accumulated more leave days than the remainder of his working days to retirement date. In accordance with the Constitution, the most senior Justice of Appeal will act as Chief Justice until such time as His Excellency the President will appoint a successor.’

We note that the notices from Chief Secretary were not issued by the appropriate authorities, namely the Chief Justice himself, or the Judiciary. Instead, an official of the Executive arm of government issued the notices. The Government’s notices do not indicate whether or not the decisions to go on leave were made voluntarily by the Chief Justice and Justice Twea, respectively.

We have also become aware that as part of his State of the Nation address earlier this month, President Mutharika declared that Parliament was ‘more supreme’ than the courts. This is simply incorrect. The Constitution is Malawi’s supreme law, and it provides for three separate though mutually interdependent arms of government. Under the Constitution, the independence of the judiciary, to apply the law impartially, is expressly guaranteed.

Given the above facts and constitutional position, we are therefore concerned that the government’s notices and the purported placement of the Chief Justice and Justice Twea on leave pending retirement, is an attempt to interfere with the independence of the judiciary in Malawi. This is in violation of Malawi’s domestic and international obligation to respect the independence of the judiciary.

Section 103 (1) of the Constitution of Malawi clearly states that the judiciary must be allowed to function independently. Article 26 of the African Charter on Human and Peoples’ Rights affirms that ‘States Parties to the present Charter have the duty to guarantee the independence of the courts.’

The Executive efforts to place judges on involuntary leave pending their retirement is ultra vires the Executive powers, violates the constitution, the security of tenure of the judiciary and separation of powers.

We wish to remind the Government of Malawi that respecting judicial independence is not a cloistered virtue. It must be seen to be practiced in order to ensure the confidence of the people in the judiciary. Finally, we reiterate that the decision for a judge to go on leave pending retirement should be made voluntarily by the concerned judge, in consultation with the Judicial Service Commission. It is the Chief Justice and or the Judiciary who if they wish must communicate to the public such decision.

We, therefore, urge the Executive in Malawi to withdraw the offensive notices of placing Chief Justice Nyirenda and Justice Twea on forced leave and make an appropriate public announcement about such retraction. 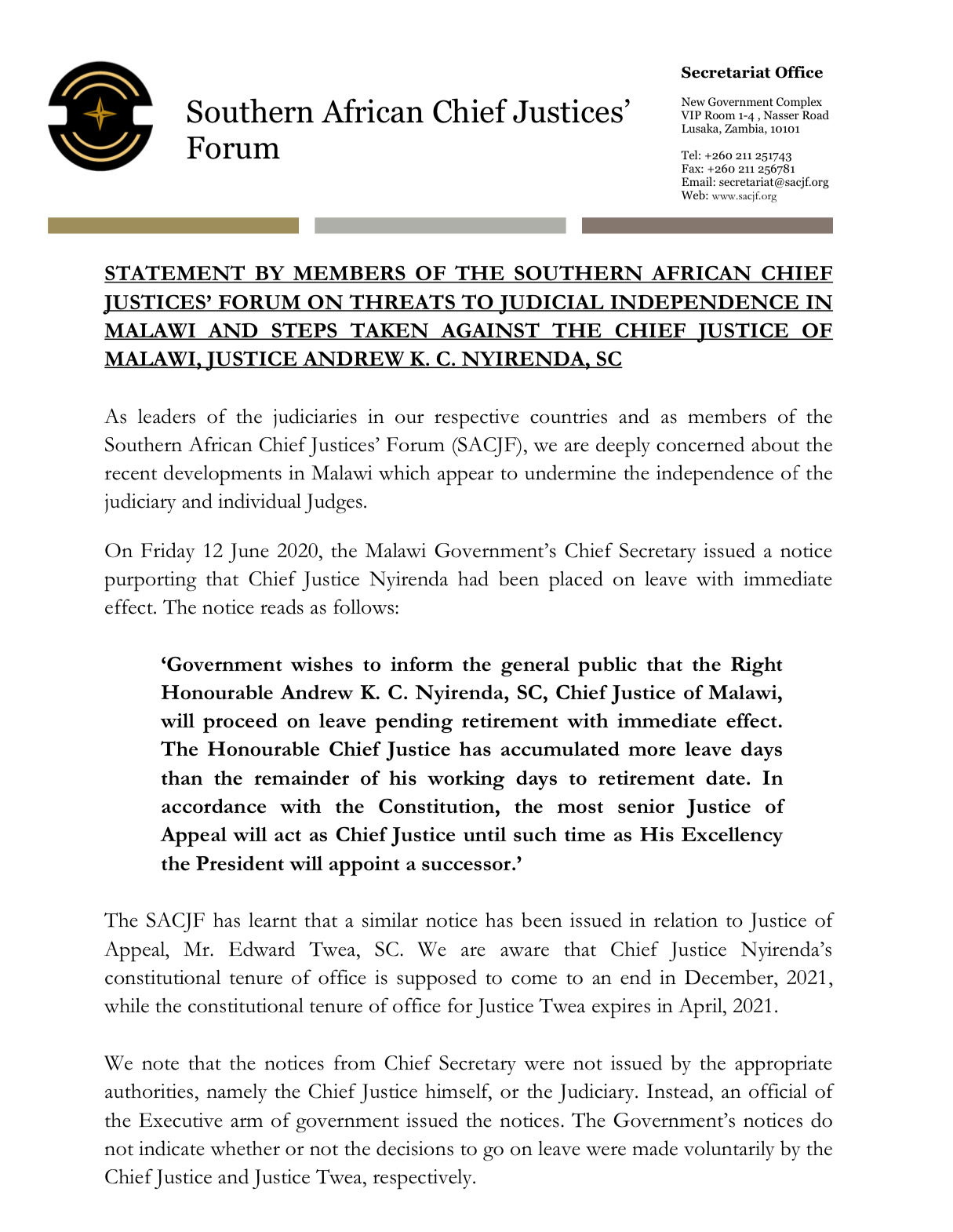 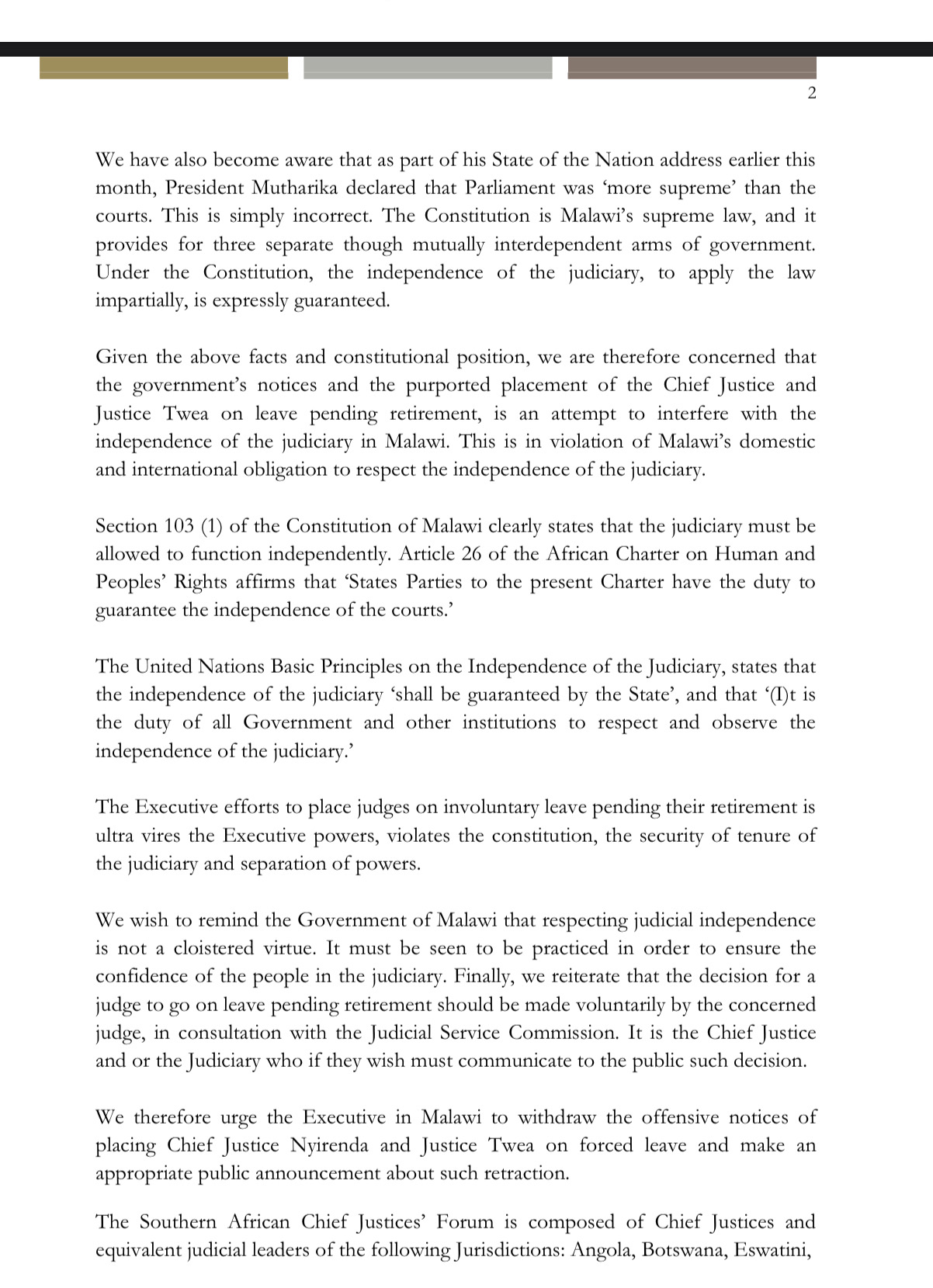 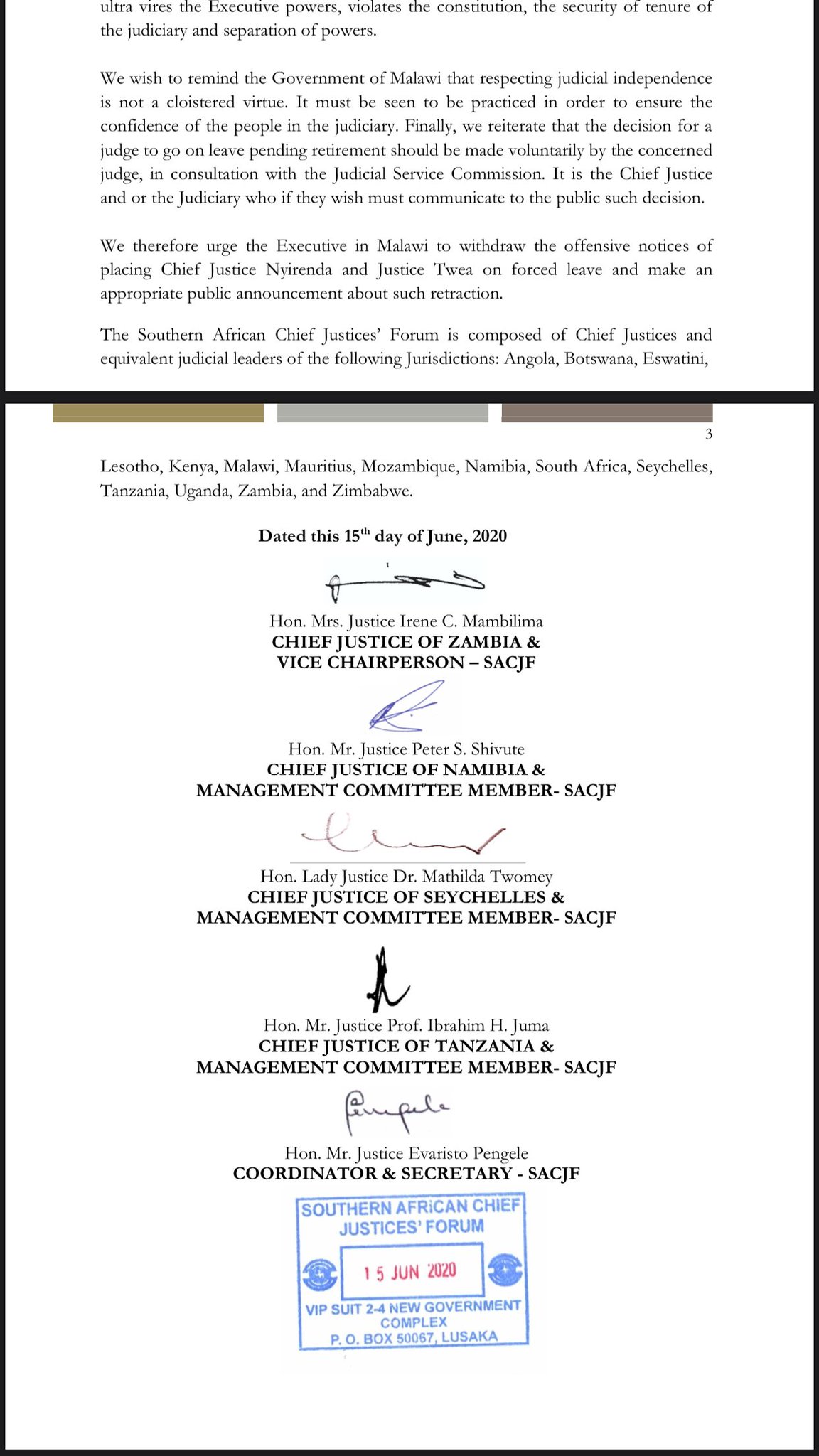