The Election Resource Centre Africa has written to the Parliament of Zimbabwe urging it to postpone the planned public hearings for the Constitutional Amendment Bill on grounds that the lockdown makes it impossible for the citizenry to input to the people.

The hearings start on the 15th of June 2020 across the country. We present the election watchdog’s letter in full below.

RE: RECOMMENDATION FOR PARLIAMENT TO POSTPONE PUBLIC HEARINGS ON CONSTITUTIONAL AMENDMENT NO. 2 (H.B. 23, 2019).

The Election Resource Centre writes this letter to your Honorable House in light of concerns arising from the announced resumption of Public, Hearings on Constitutional Amendment No. 2 Bill, Slat. for the 15″ to 1, June 2020. Grounds for the initial postponement of Public Hearings in March 2020 remain unchanged if anything have worsened. As at June 9, 2020, the Ministry of Health and Child Care has confirmed a cumulative 314 COVID.19 cases in Zimbabwe. The President of the Republic, Emmerson Mnangagwa announced an indefinite lockdown that enforces restrictions of movement among others.

Public Hearings must be held in compliance with Section 328 (4) of the Constitution of Zimbabwe which demands that Parliament invites members of the public to express their views on the proposed Bill in public meetings and through written submissions, and must convene meetings and provide facilities to enable the public to do so.

At present, Zimbabwe is gripped by the far-reaching effects of the novel coronavirus which dictate several conditions on how inevitable gatherings such as funerals are to be handled. Under the World Health Organization recommendations, Government announced public gatherings are to be limited to a number of a maximum 50 people. Following this directive, the 18 Public Hearings slated, imply a maximum of 900 people including organizing staff, a number that falls far short of sufficient representation of public participation. In summary, ERC recommends the following action points;

• Public Hearings be postponed and only resume when Parliament is able to convene meetings and provide facilities to enable the public to do so. This may only be possible when the lockdown is lifted or restrictions are renewed.

• Parliament continue accepting online submissions, but knowing well this effort does not replace meetings for Public Hearings as a significant demographic does not have access to internet. 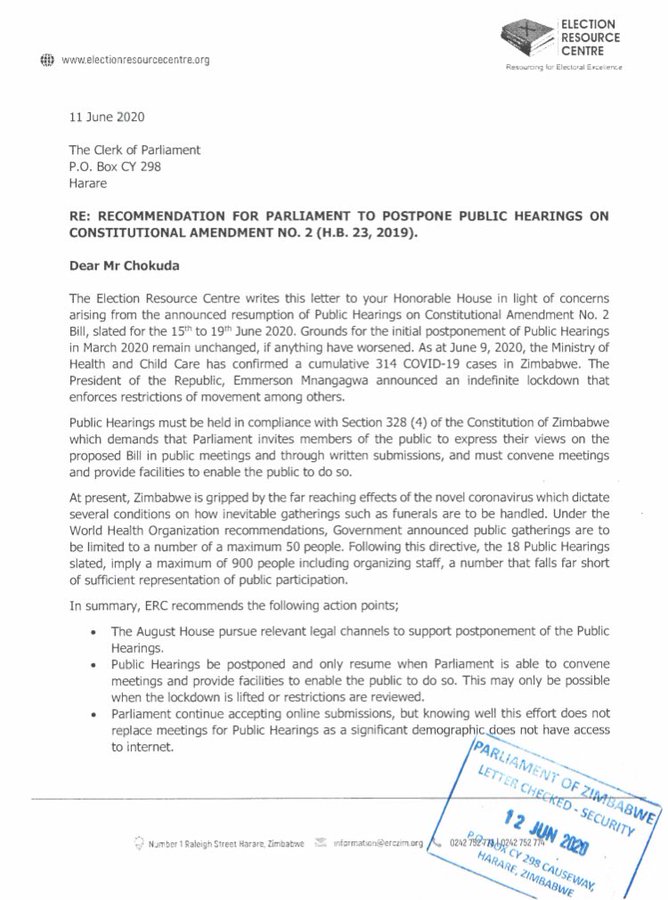