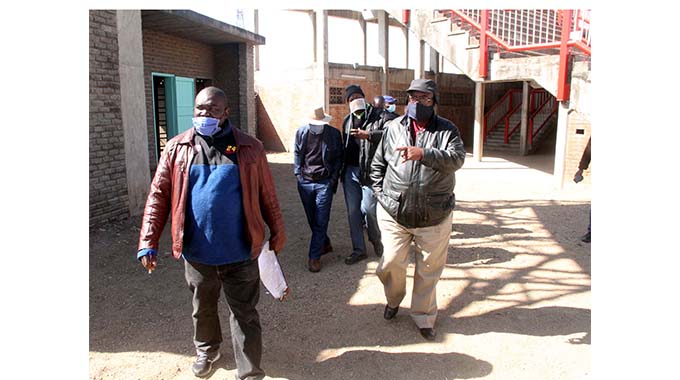 Principal director in the Ministry of Youth, Sport, Arts and Recreation Dr Benson Dube (right) and Zifa spokesperson Xolisani Gwesela (left) lead a tour to assess the progress on the refurbishment of Barbourfields stadium [13/06/20]

The government has ruled out the demolition of Bulawayo’s Barbourfields Stadium (BF) even if it fails to meet the standards acceptable to the International Federation of Association Football (FIFA) and the Confederation of African Football (CAF).

Speaking during a tour of the stadium on Saturday morning to assess the ongoing renovations, Ministry of Youth, Sport, Arts and Recreation principal director, Benson Dube said BF is of sentimental value to the city and government will not destroy it but rather build another stadium. Said, Dube:

Highlanders’ history is intertwined with that of BF for a better part of its existence hence we are aware of the sentimental value the stadium has not just to the club but football history in the country. We are of the opinion that if our efforts to make the required improvements cannot be done, structurally, then we would have to build a new stadium for Bulawayo.

Remember BF was constructed just over 60 years ago and it would be difficult for us to make it fully meet 2020 specifications. There are sections we can modify, there are some that structurally we cannot alter and if Fifa is not happy then as Government we will construct a new stadium for the city.