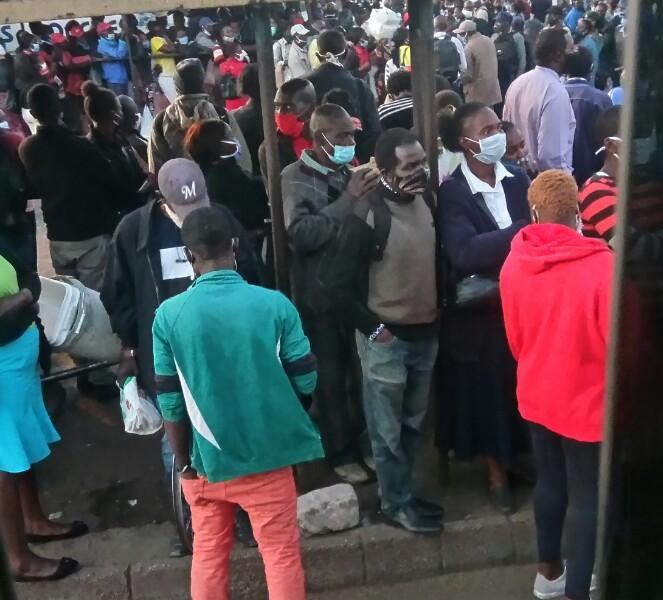 Hundreds of commuters stranded at Copacabana bus terminus in central Harare around 1700hrs, on Monday, 18 May 2020 (Picture credit: Twitter)

World politics specialist, Stephen Chan, told the Daily News on Tuesday that the international community, both the East and the West, is surprised by President Mnangagwa’s shilly-shallying in resolving the country’s crises. Said Chan:

The indecisiveness of …Mnangagwa is surprising to me and indeed … to the international community as a whole.

And given the effective paralysis of the opposition, as it insists on opposing itself — self-cannibalising itself — this can only invite public unrest.

So the MDC is as much to blame as Zanu PF for any turmoil that may come. I think you can forget re-engagement with the West.

University of Zimbabwe political science lecturer, Eldred Masunungure told the publication that the country has all the ingredients for civil strife. Said Masunungure:

… the ingredients for civil unrest are there, the firewood and petrol are there, what is missing is the lighter.

Mnangagwa has to deal with toxic politics in Zimbabwe. One of the effective solutions is to have a coalition government.

A coalition government can act as a paracetamol (pain killer). It can reduce political temperatures for now. The country is burning. It really is high time to bury the hatchet.

Mnangagwa must start to engage all locals, political parties and other stakeholders.

We cannot talk about re-engagement internationally when you are failing to engage your fellow countrymen.