Set against the backdrop of to week of global protests against state brutality and discrimination, the Young Lawyers Association of Zimbabwe (YLAZ) is increasingly concerned by the continued deterioration of civil liberties in Zimbabwe and in particular the sustained attack on the legal profession.

In the past week alone, at least six (6) lawyers have been targeted by the police directly in relation to the exercise of their ordinary work as lawyers. Four (4) lawyers, namely Advocate Thabani Mpofu, Tapiwa Maluku*, Joshua Chirambwe and Dumisani Dube, were arrested and charged with obstructing the course of justice and another two (2) lawyers, Choice Damiso and Lawman Chimuriwo were taken in for questioning by the police and later released without charge.

The matter involving Adv. Mpofu, Mr. Makanza and Mr. Chiratnbwe is predicated on a challenge to the appointment of the Prosecutor General, whose office is now overseeing the prosecution of our colleagues, which brings the independence and impartiality of the same into dispute. We remind the Prosecutor-General of his constitutional obligation to “exercise his functions impartially and without fear, favour, prejudice or bias” as required by section 260 of the Constitution. Mr. Dube was arrested at a police station while attending to the arrest of his client. This appears to be a violation of article 18 of the United Nations Basic Principles on the Role of Lawyers which states that “lawyers shall not be identified with their clients or their clients’ causes as a result of discharging their functions.”

We believe that any prosecution should only be for the purpose of legitimately seeking to serve the interests of justice. It should not be used as to measure of intimidation or to frustrate an individual, especially when the charges, on the face of it, do not disclose an unassailable offence and which have already been subject to investigation by an independent body such as the Law Society of Zimbabwe. The events of the last week create an impression of an assault against the legal profession which negatively affects lawyers’ ability to represent litigants without fear, which actions endanger the future of our profession.

We are also concerned by the partisan use of the police and army to “settle” civil disputes between opposition political parties. The arrests of MDC Alliance leadership on allegations of “criminal nuisance” and contravening COVID Regulations are, on the face of it, unjustifiable in a democratic society and an affront to the rule of law and to progress. We remind the security services of their constitutional duty to maintain the “utmost respect for the fundamental rights and freedoms and the democratic values and principles enshrined in the Constitution” as required by section 206 and not to “act in a partisan manner” or “further the interest of any political party or cause” as required by section 207 of the Constitution.

The persecution of legal practitioners must come to an end and the government must return to the ethos of the rule of law as espoused in the Constitution. The courts, military and police force should remain independent and impartial so as to ensure that Zimbabweans can have faith its the same. No country has ever flourished without upholding these ideals.

Amidst this repression, we reiterate our call for the return to constitutionalism and to the principles that those in government purport to have fought for. Now is not the time for silence. A government that claims to be democratic must be reminded A those democratic ideals. We, as young lawyers, are determined to secure a future in which we can do our work without fear, favour or intimidation and where Constitution of Zimbabwe is respected, protected, promoted and fulfilled. 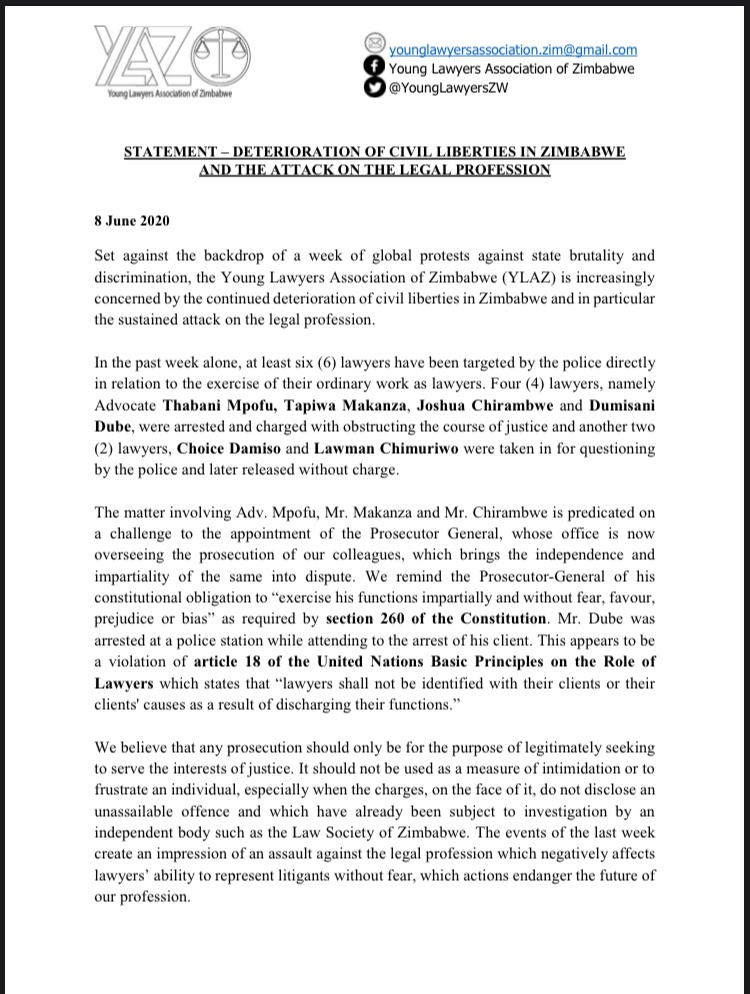 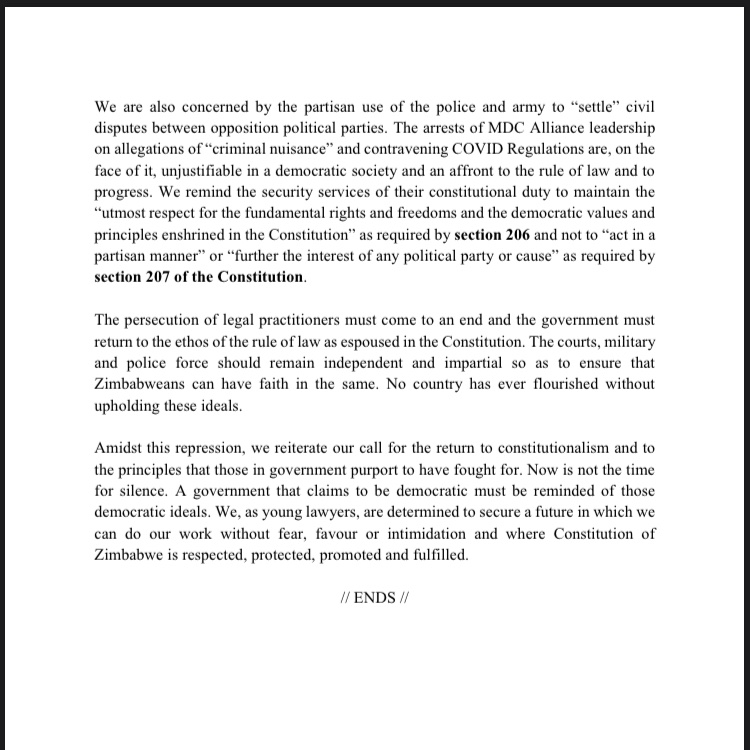