08 June 2020
The Law Society of Zimbabwe is concerned by the arrest of lawyers, Mr Patrick Tererai, Mr Dumisani Dube, Advocate Choice Damiso (subsequently released after being turned into a state witness), Mr Tapiwa Makanza and Mr. Joshua Chirambwe. Over the past few days, the arrest of members of the legal profession has become quite a common feature. One of our functions as Regulator of the Legal Profession is to ensure that members are conducting themselves ethically and professionally and as such matters like this should, ordinarily, be brought to our attention. However, despite some of the alleged cases having occurred over a year ago we have not received any complaint from members of the public, the police or from the courts.

As a representative body we are further concerned that the arrests appear calculated to hinder the members of the profession from undertaking their professional duties. A review of the recent arrests shows a disturbing pattern of intimidation, harassment of lawyers and associating lawyers with the causes of their clients.

On the 10th of May 2020, Mr Patrick Tererai of Tererai Legal Practice was manhandled and later detained overnight by police officers at Beitbridge police station after attending to his client at the police station. One of the officers, an Assistant Inspector Sibanda, forcibly removed his face mask and lodged him in police cells thus exposing him to COVID-19. He was subsequently charged with disorderly conduct.

Mr Dumisani Dube of Mathonsi-Ncube Law Chambers was arrested and taken to court on the 6th of June 2020, where he was granted bail in the sum of ZW$ 5000.00. He is being accused of “defeating or obstructing the course of Justice” in that he is alleged to have filed a fake certificate of service and obtained judgment in favour of his client.

Advocate Damiso is also accused of “defeating or obstructing the course of Justice” as an accomplice to Advocate Thabani Mpofu. As a senior member of the profession, she was acutely aware of the allegations against her for a whole week. It is therefore strange that she had to be dramatically picked up whereas she could have presented herself before the police had she been requested to do so.

On Sunday, the 7th of June 2020, Mr. Makanza, the legal practitioner who instructed Advocate Thabani Mpofu was also arrested and subsequently detained. This is despite the fact that he had always been aware of the allegations against him and has cooperated with the police who investigated the same matter in 2019. His detention is, therefore, deeply concerning.

On Monday 8th June 2020 lawyer Joshua Chirambwe, the applicant in a pending Constitutional application was arrested on allegations of assisting Advocate Thabani Mpofu to plagiarise Simbarashe Zuze’s affidavit thus allegedly defeating the course of justice. Lawyers are not above the law and may be arrested like anyone elsewhere there is a reasonable cause to do so. In the case of Dumisani Dube the matter can be investigated without having to incarcerate the accused person. The fact that the legal practitioner was arrested whilst he had voluntarily gone to the police station to assist his client creates the impression that he was targeted for doing his work.

The arrest of the other two lawyers is also linked to the performance of their duties as legal practitioners. In the case of Advocate Damiso her alleged offence arose from her role as commissioner of oaths whilst Mr Makanza was merely representing his client. The police allege that the client does not exist whilst Mr. Makanza insists that the client exists and that he has taken him to the Law and Order section of the police twice. It is also a matter of record that the police have had more than a year to investigate this matter.

The sudden arrest of these lawyers, therefore, raises the inescapable view that the lawyers are being associated with the cause of their client. The constitutional application at the centre of these arrests sought to impugn the appointment of the Prosecutor General by the President. In this regard, we are apprehensive because the arrests appear to be calculated at intimidating and harassing lawyers in the course of their duties.

The right to legal representation is a Constitutionally guaranteed right. The right of legal practitioners to practice their profession is also guaranteed in the Constitution. The Law Society accordingly condemns the continued systematic harassment and intimidation of lawyers in the course of their work. Such actions undermine the rule of law and the administration of justice in Zimbabwe. In terms of both our domestic and international principles, the State must guarantee that lawyers are free to perform all of their professional functions without intimidation, hindrance, harassment or improper interference, are able to travel freely to consult with their clients and are free of threats in the discharge of their duties. 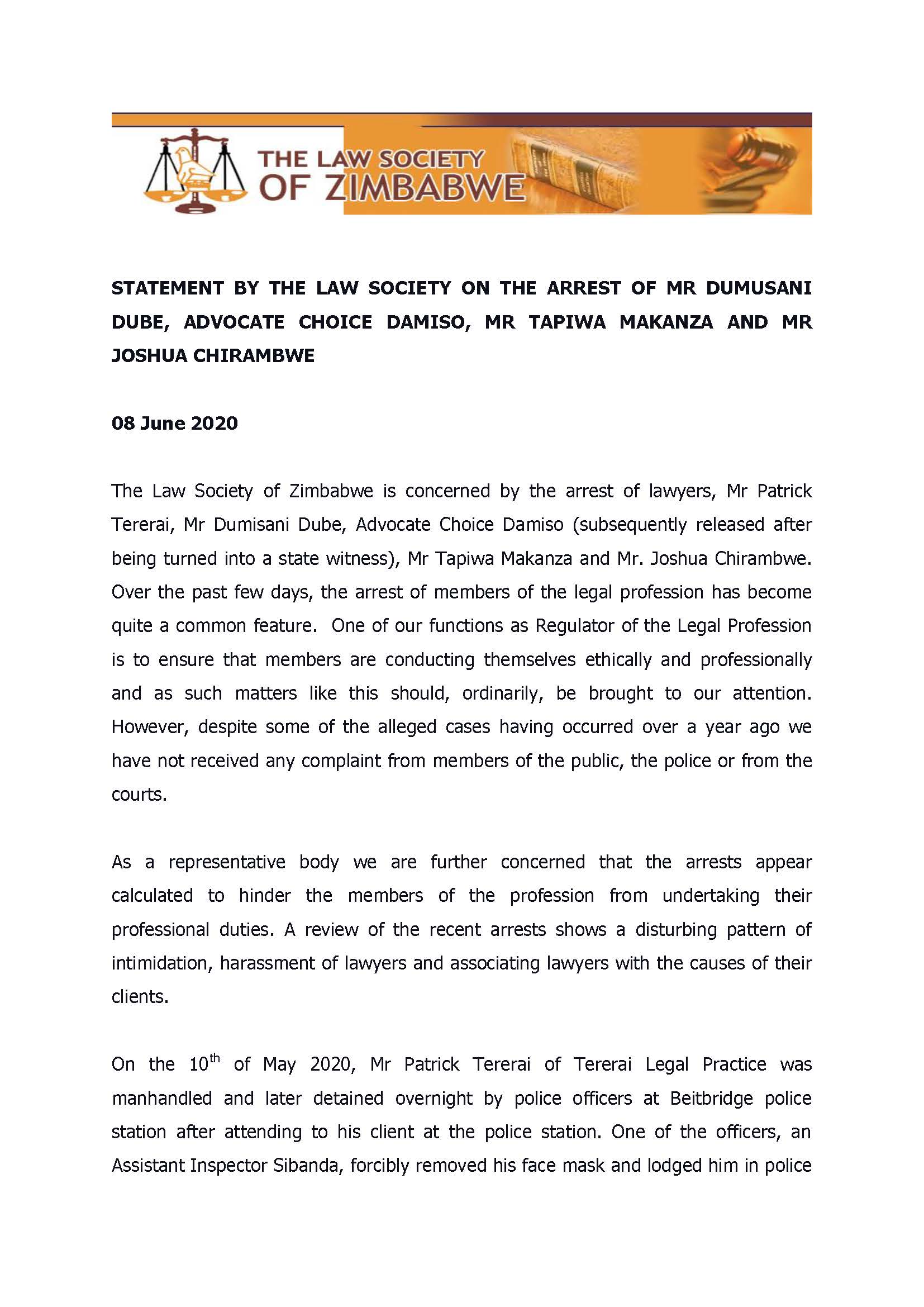 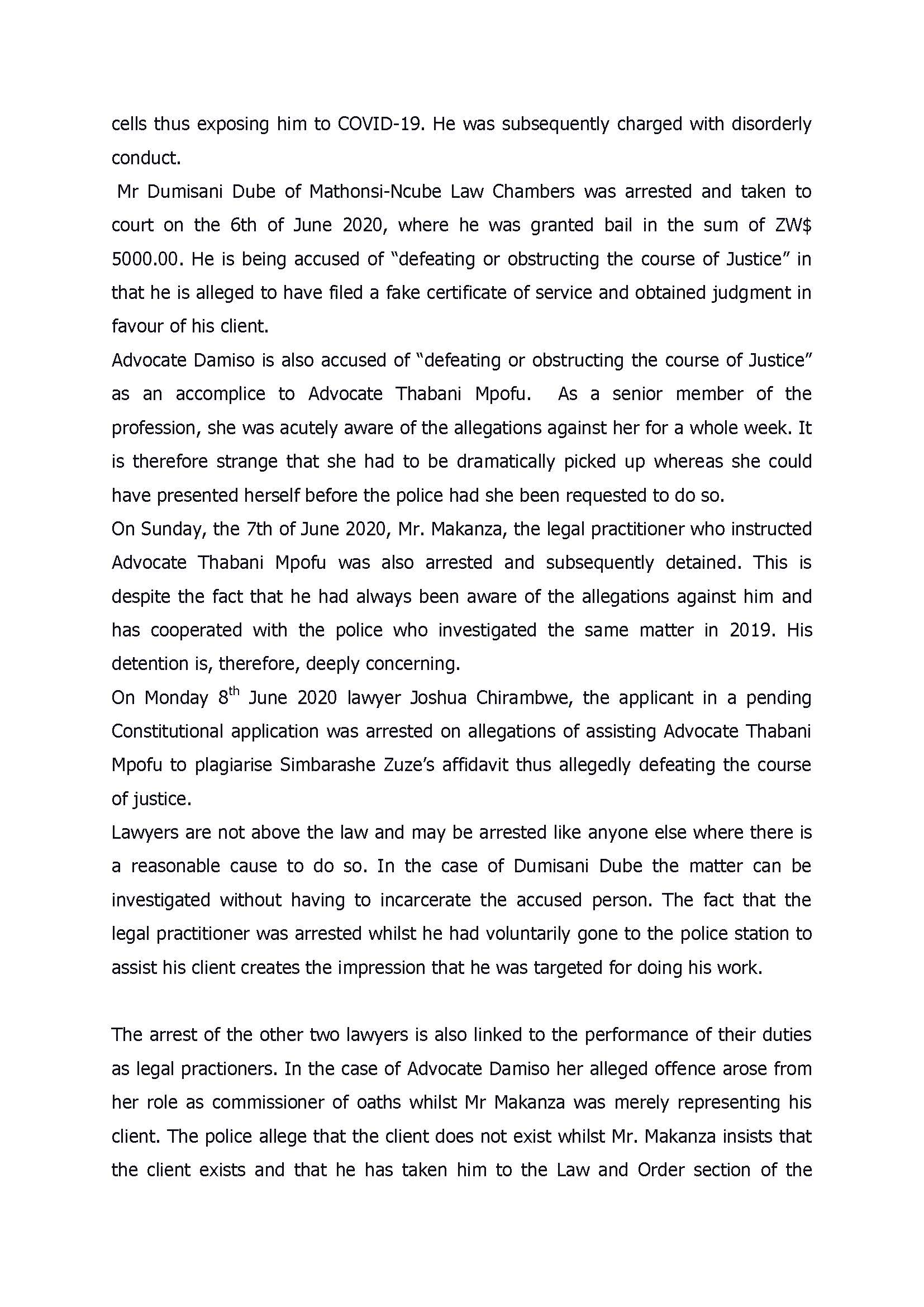 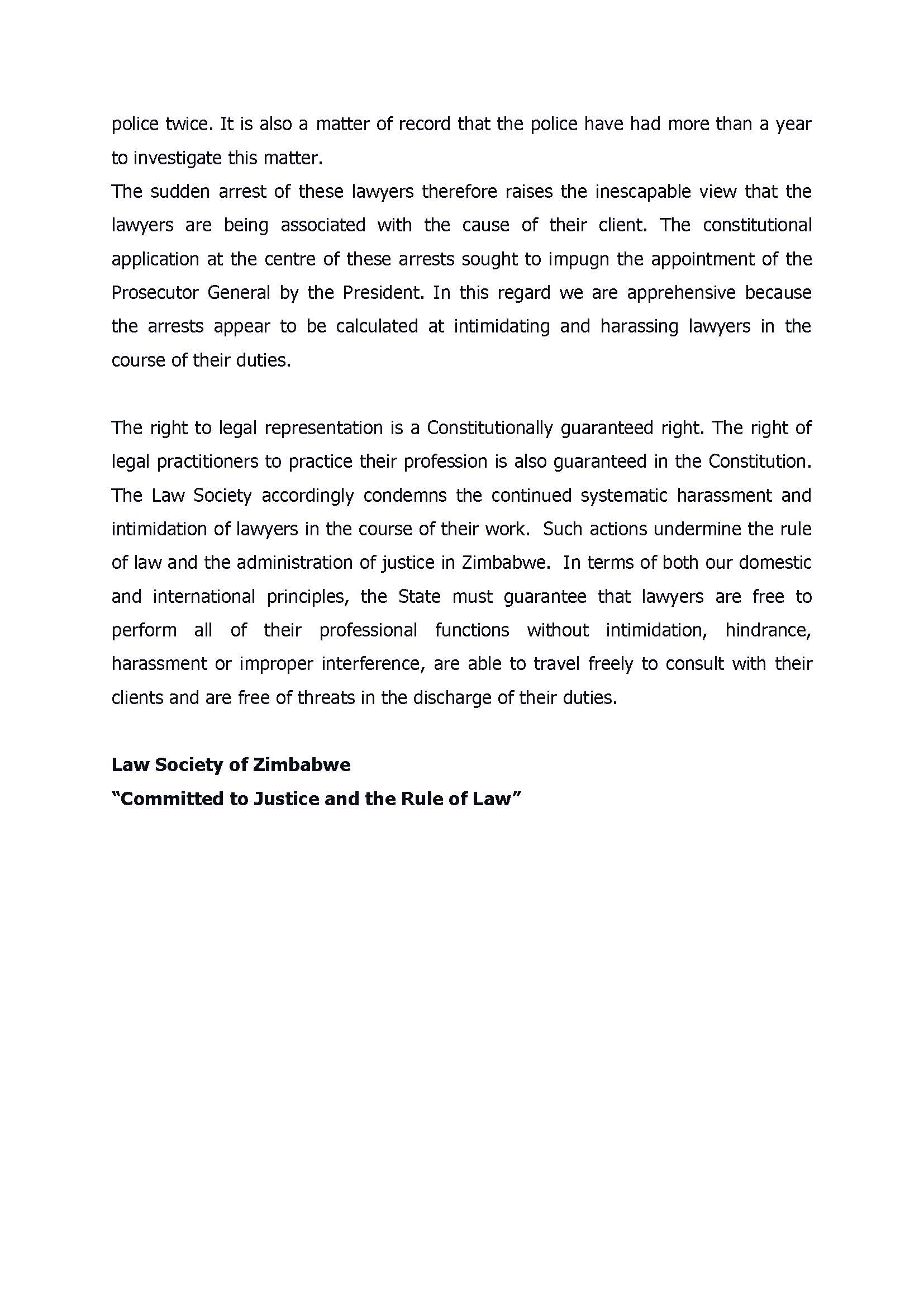