To:
The Honorable David Malpass

President of the World Bank Group

The COVID-I 9 pandemic has placed the global economy in unprecedented territory, with every country in the world mounting a public health response that has largely shut down economic activity, putting even the most steadfast economies under considerable strain. The International Financial Institutions (IFIs) have already taken quick and unprecedented measures to provide much-needed assistance to poor and vulnerable countries. I commend these efforts to enable scarce resources to go where they are most needed: to fight coronavirus and mitigate associated economic and social impacts. I write today with respect to World Bank support to Zimbabwe for coronavirus response, and to urge the Bank to attach strict accountability and transparency measures to that program. These are important given the need for significant reform of most state institutions in Zimbabwe, pervasive corruption and impunity, and the demonstrated disinterest by the Government of Zimbabwe in the wellbeing of its citizens.

As you know, three African countries — Eritrea, Sudan and Zimbabwe — are in arrears to a combination A the African Development Bank, European Investment Bank, International Monetary Fund and World Bank, rendering them ineligible for regular financing and many emergency relief programs offered by the Els. However, on May 6 the World Bank announced plans to provide Zimbabwe with a $7 million grant for coronavirus response, with $5 million coming from the World Bank’s global financing facility trust and $2 million being diverted from the Zimbabwe Idai Response Project (ZIRP) that is helping communities recover from the devastation of Cyclone Wei, which hit eastern Zimbabwe in March 2019. The World Bank has other trust funds, for example, the newly announced Health Emergency Preparedness and Response Multi-Donor Fund, which are accessible by countries in arrears.

This extraordinary crisis will require an exceptional response, but it is equally important not to lose sight of the historical behavior of countries like Zimbabwe where the government has used, and continues to use, state resources and international aid to suppress its population and enrich the country’s ruling elite. I was relieved to hear that the $7 million grant for Zimbabwe will be managed and implemented by the United Nations Office for Project Services (UNOPS) and the Dutch Catholic Organization for Relief raid Development Aid (Corclaid), but concerns remain that the funding this grant provides for desperately-needed response initiatives will fall into the wrong hands, directly or indirectly, despite the best intentions of the implementing partners. It is for this reason that I urge the World Bank to impose very strict benchmarks and transparency and accountability measures on the $7 million grant and any future program for Zimbabwe to ensure that procurement processes are fair and transparent; that contracts for goods and services are not awarded to Zimbabwean companies under U.S. sanctions or known to engage in corrupt practices (as was the case with the Zimbabwean government’s Command Agriculture program); that distribution of assistance is not discriminatory or manipulated for political gain or to bolster the security sector; and that projects are completed in a timely fashion as planned. This is to both ensure accountability by the implementers to deliver results and eliminate any forms of interference by government actors. Further, any package mobilized must incorporate independent Zimbabwean civil society and community voices.

I look forward to remaining engaged on this issue for Zimbabwe, and Sudan as well. These two countries face vastly different circumstances and challenges and a one-size-fits-all approach to assistance to countries in arrears must take these matters into account as solutions are crafted.
Sincerely
JAMES E. RISCH 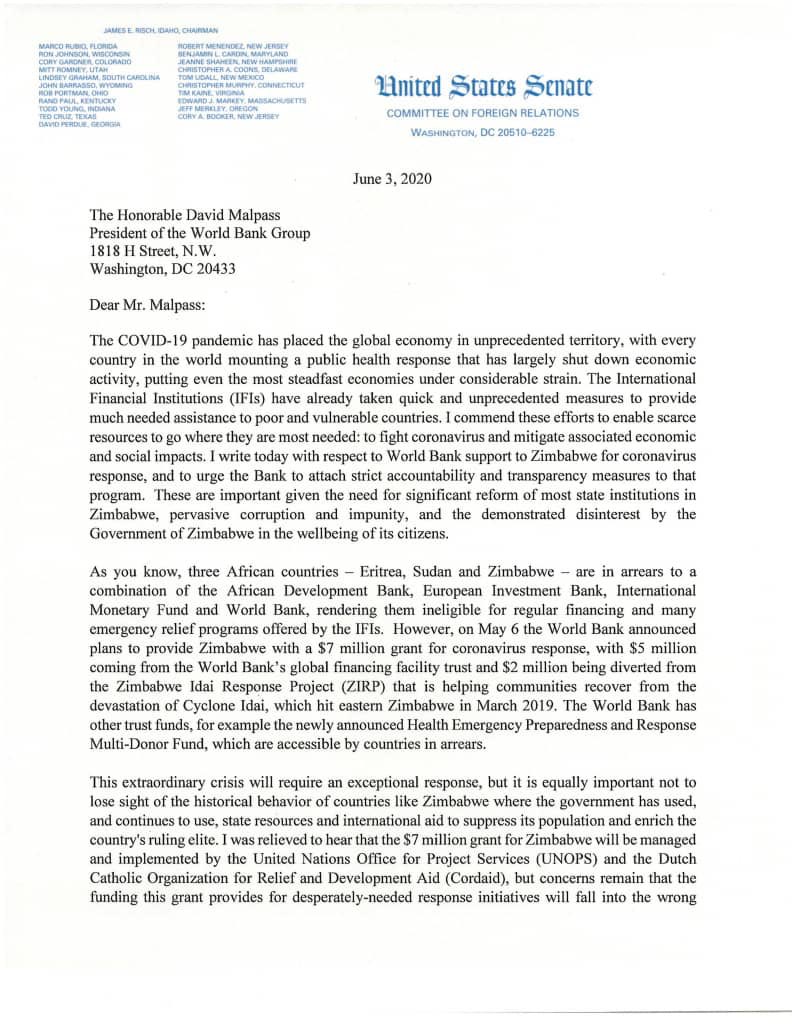 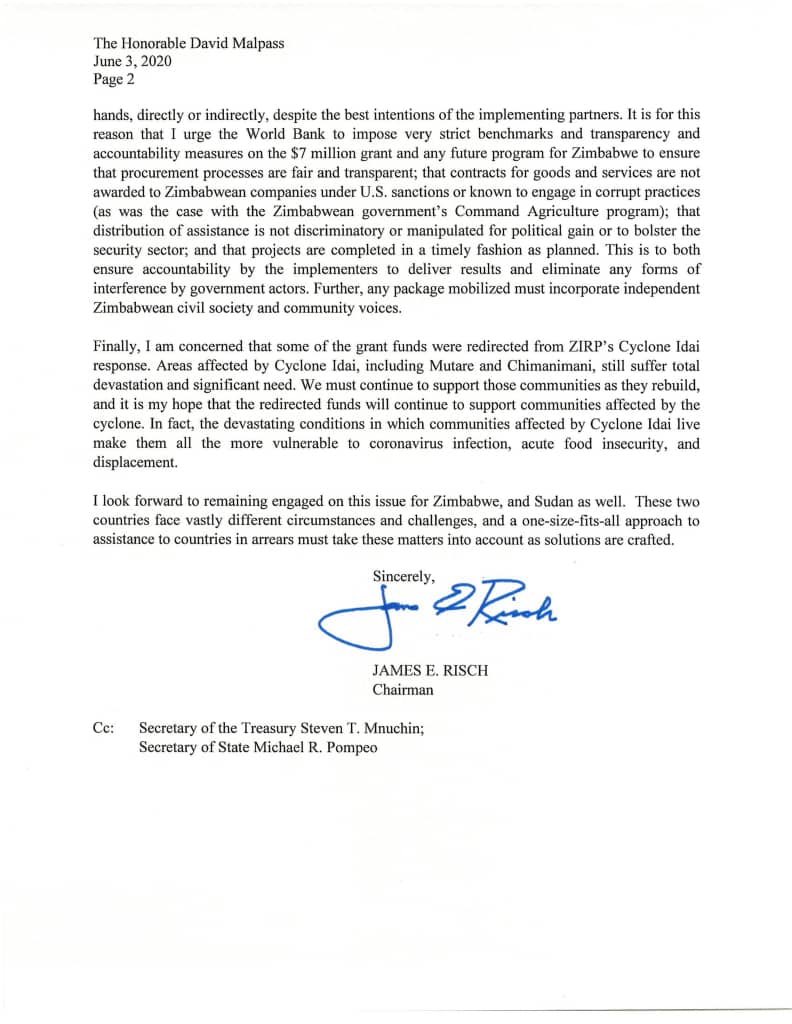