Alex Tawanda Magaisa, a law lecturer in the United Kingdom has suggested that government officials might be taking advantage of the fight against the coronavirus to engage in underhand dealings.
We present his twitter thread below.

Critics warned that the #COVID19 pandemic presents a field day for corrupt persons. This thread connects the dots concerning test kits from Namibia to Zimbabwe. Was this a donation disguised as a sale?

On 14 April 2020 Health Minister Obediah Moyo instructed the then Permanent Secretary for Health, Dr Mahomva to process payment for 4500 Test Kits which he said “are available locally from China and also used in Namibia”. Very vague – are they from China or Namibia? 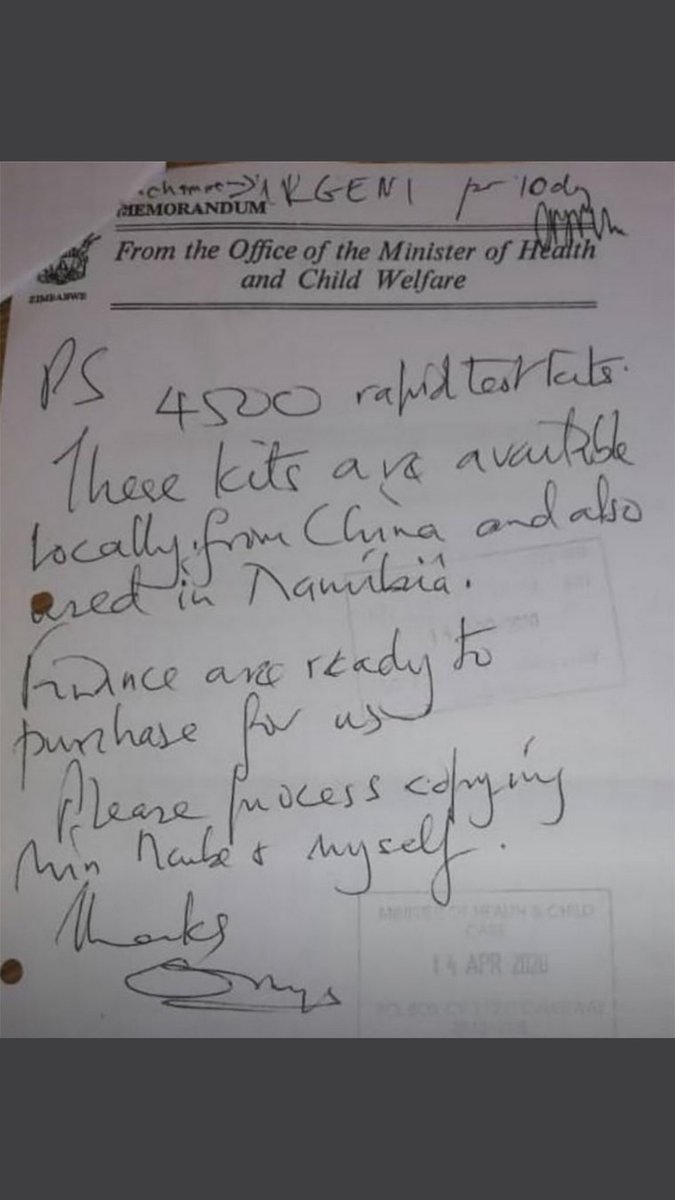 On 15 April, Secretary Mahomva did as instructed & wrote to her counterpart at Finance
@GGuvamatanga

with an invoice “for rapid response test kits for purchase from Namibia”. So we know they were being bought from Namibia. But Namibia doesn’t manufacture test kits. 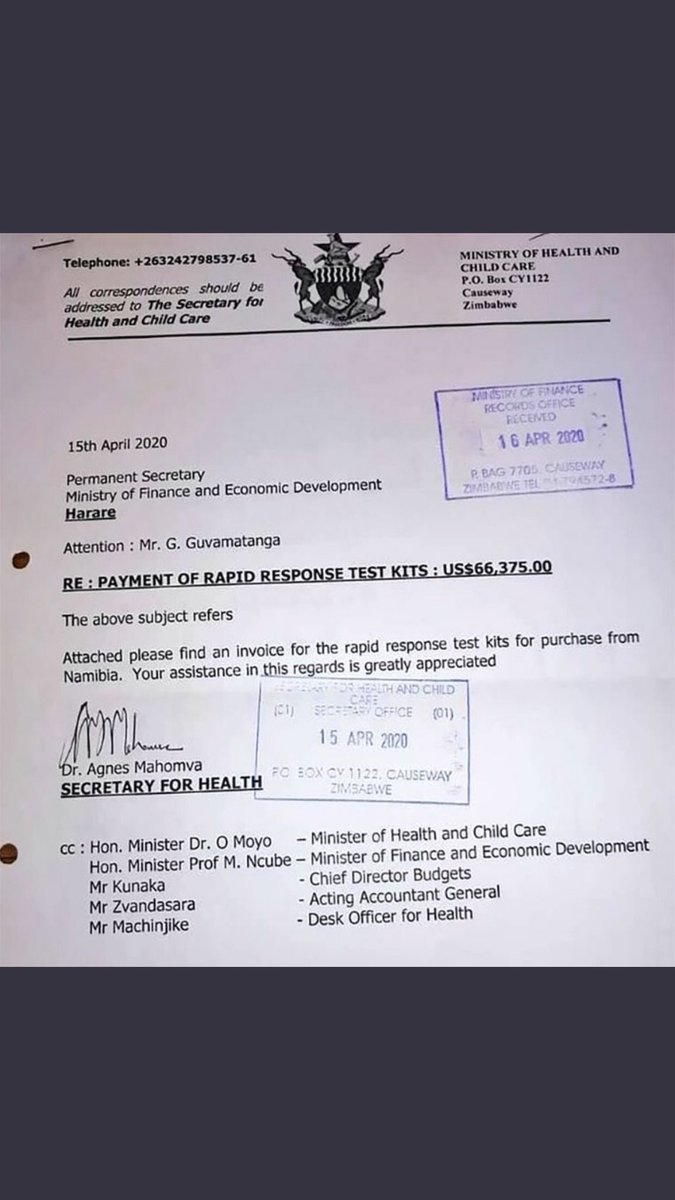 The invoice was from Jaji Investments a company purportedly based in Namibia. Interestingly, while it is dated 4/7/2020, the invoice is stamped as received on 16/03/2020 by NatPharm, Zimbabwe’s pharmaceutical utility. We also learn that there were 4499 kits, 1 short of 4500. 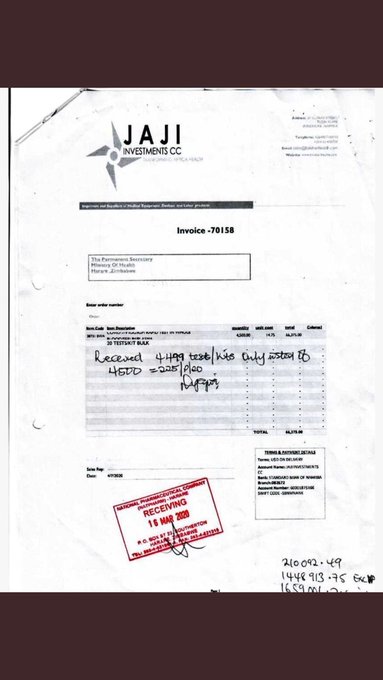 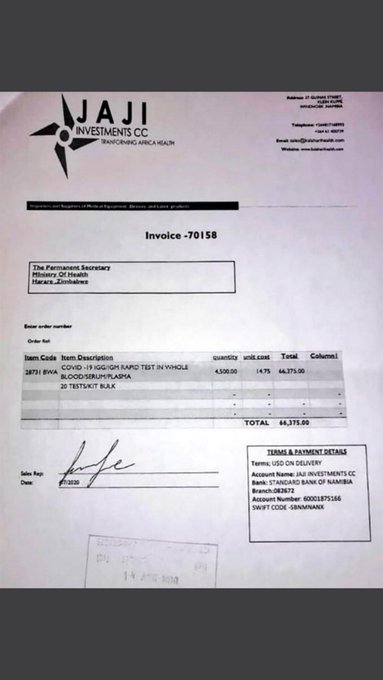 New information uncovered by@daddyhope shows that Jaji Investments is connected to a relative of President
@edmnangagwa who is also part of his close staff. But meanwhile, let’s go to Namibia & see what our brothers and sisters there are saying concerning the test kits.
@TheNamibian newspaper reported on 25 April 2020 that there was confusion “over a donation of 4500 RRTK allegedly made to Zimbabwe”. Donation? That number can’t be a coincidence. Jaji from Namibia sold 4500 kits to Zimbabwe. In Namibia they are saying 4500 kits were donated! 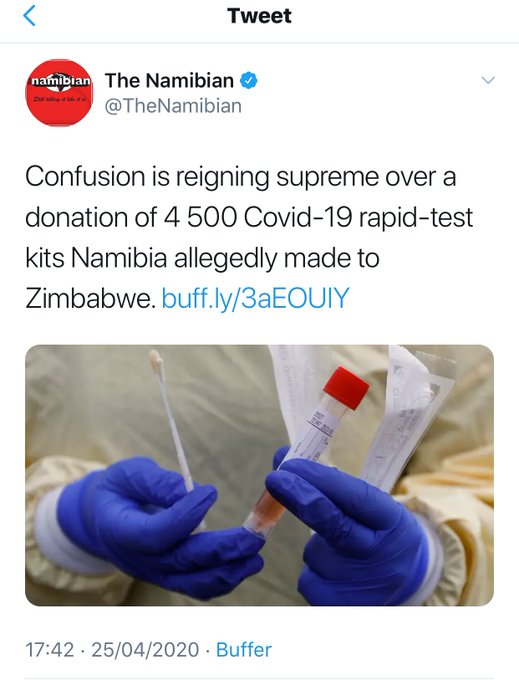 I attach screenshots of the story in @TheNamibian where interestingly Namibian ministers deny there was a donation to Zimbabwe. The Namibian says Zimbabwe’s Vice President and the Information Minister had confirmed the donation from Namibia before later denying it. 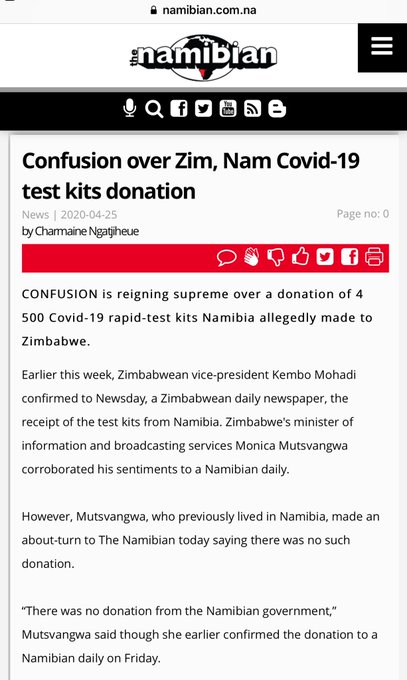 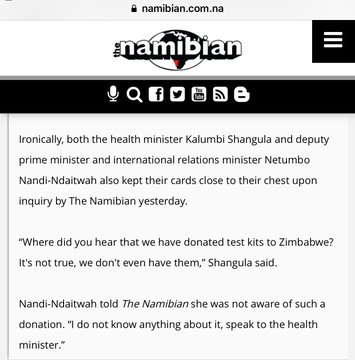 @TheNamibian was referring to a report by @namibiansun which said Zimbabwe’s Minister Mutsvangwa had confirmed to it the receipt of a donation of 4500 RRTK from Namibia. “Namibia gifts Zimbabwe thousands of Coronavirus test kits”, says the Namibian Sun 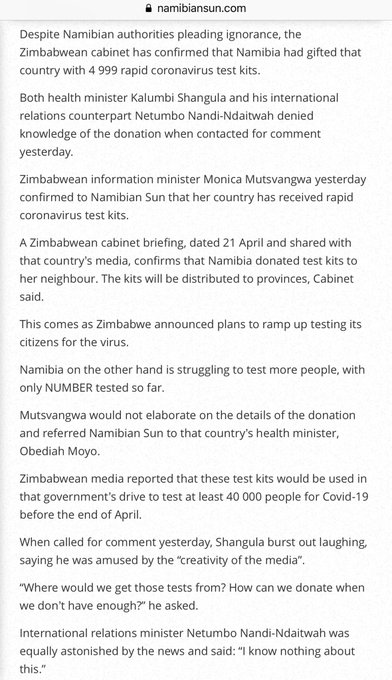 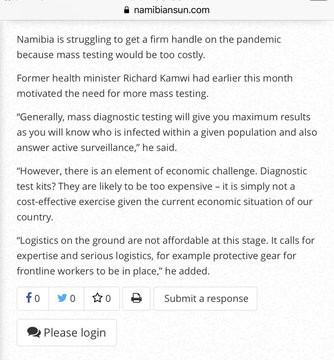 9. I have sampled comments from Namibian Twitter. Some are sympathetic but many wonder how and why Namibia could donate test kits when it also needed them. “How can we donate something we don’t have?” asks one. “We don’t even manufacture them, lol” another laughs. 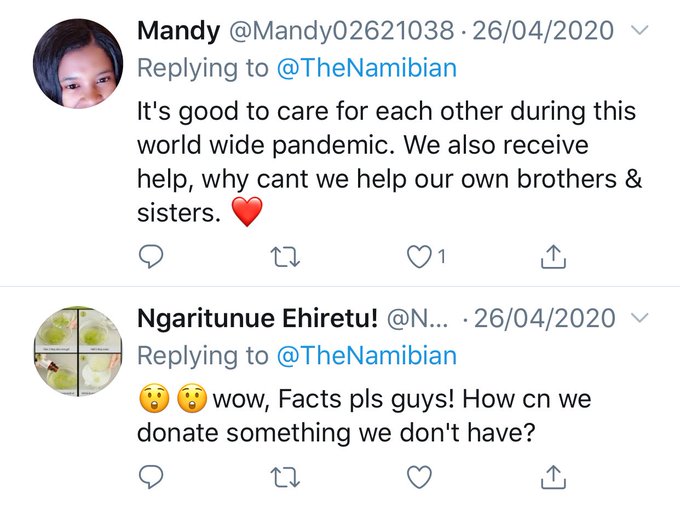 Our status as an African pity case is evident in Namibian Twitter, some expressing Pan Africanist sentiments. “Zimbabwe is genuinely in need of help. Why can’t we help out if we can?” a kind voice says. “Solidarity with Zim!” screams another. But it’s business, apparently 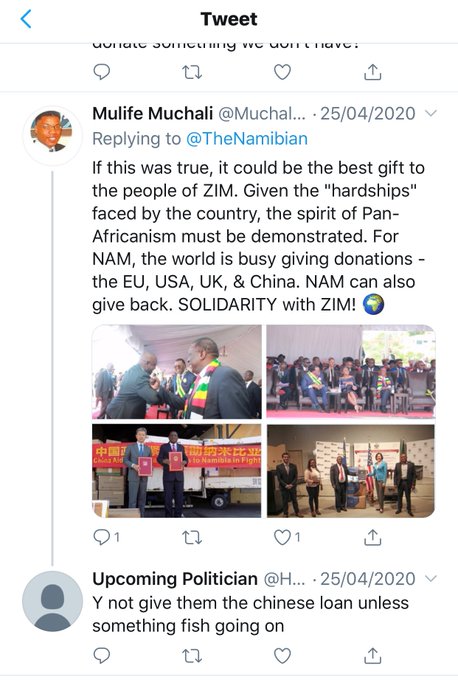 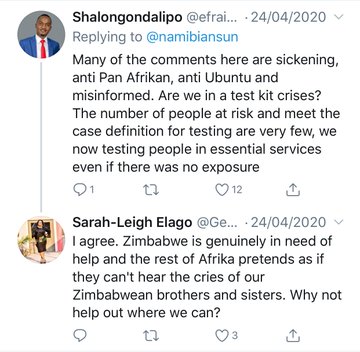 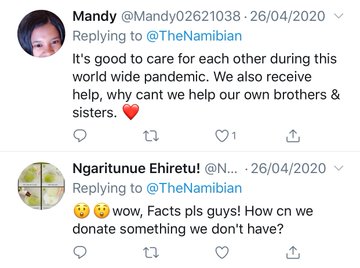 11. But other Namibians are more circumspect. They smell foul play. “Sounds like Zimbabwe Government stole test kits now they are accusing us of gifting them” says one. “If it happened lawfully why are Namibian authorities denying it? … Someone might have sold the kits” 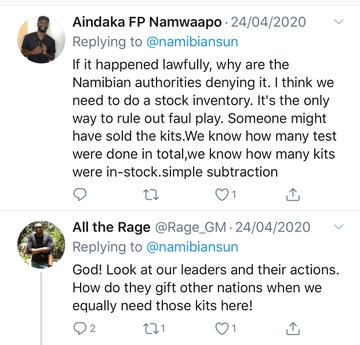 Meanwhile, back in Zimbabwe both @HeraldZimbabwe and @NewsDayZimbabwe  had reported receipt of test kits from Namibia. They both put the number at 4499, same number on that revised Jaji Investments invoice as received by NatPharm. Also within range of figure in Namibian papers 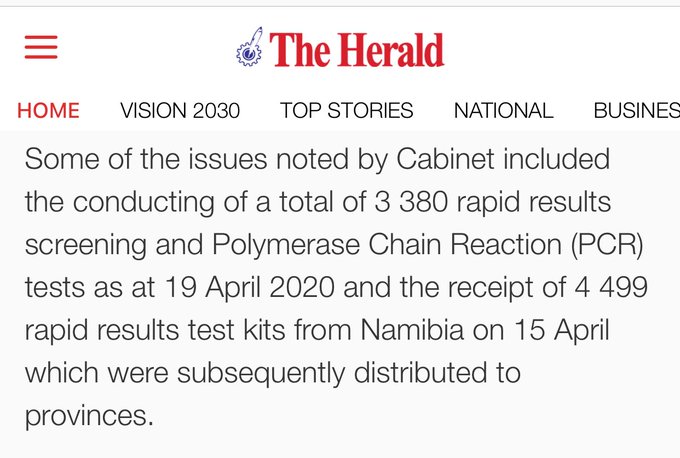 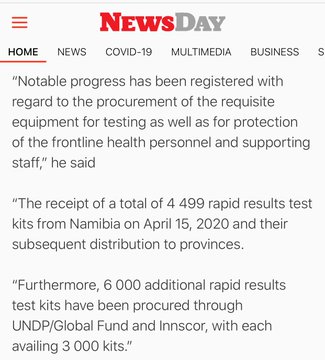 @OpenParlyZw had also reported same information. This information was from a Cabinet Briefing by the Zimbabwean Government on 21 April 2020 confirming receipt of 4499 RRTK from Namibia. The BIG question still remains – was it a donation or purchase from Namibia? 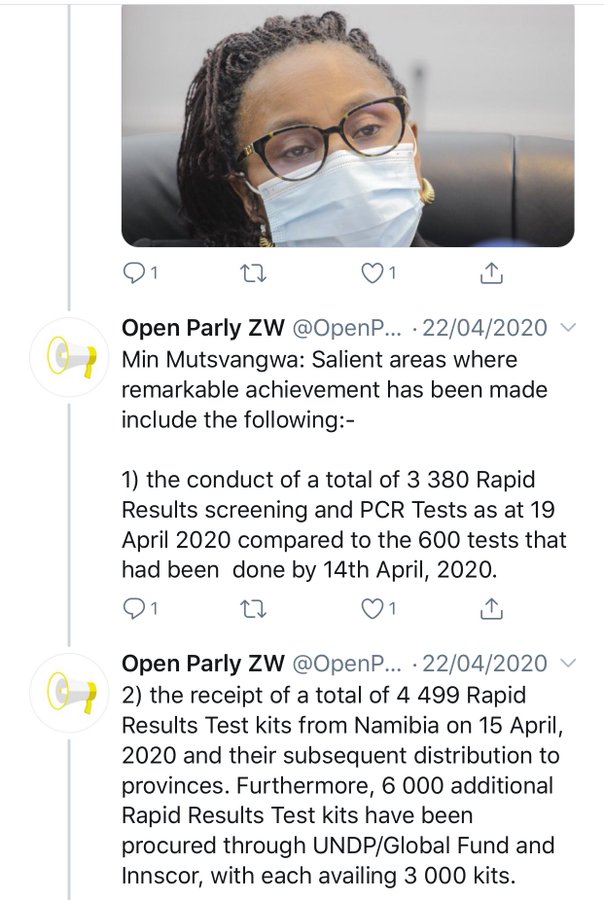 So there is no doubt that the 4499 RRTK came from Namibia. It’s also not in doubt that Jaji Investments invoiced & was paid US$66375 for them. But Namibia does not manufacture test kits. It was also receiving donations from China. Something doesn’t add up.