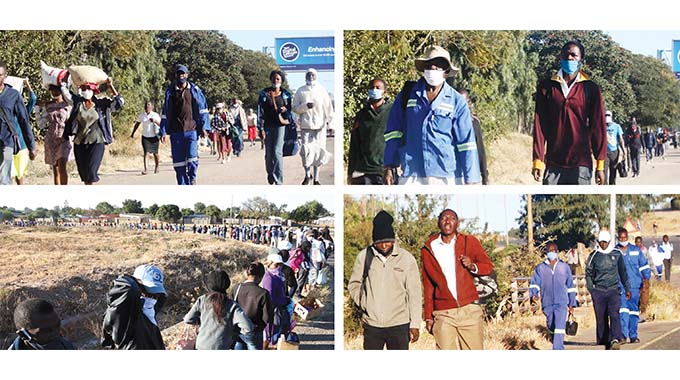 The Zimbabwe United Passenger Company, (ZUPCO) is overwhelmed, a situation that has seen workers waiting in queues for several hours while others have resorted to walking to town.

This crisis comes when private-owned commuter omnibuses which had become the mode of transport across the country were banned from ferrying people when the coronavirus lockdown was imposed on the country.

The Chronicle reports that on Monday morning between 7 am and 8 am scores of people were seen lining the main roads leading to Bulawayo Central Business District (CBD).

Speaking to the publication, one resident, Mr Maqhawe Nyathi from Emakhandeni suburb said walking to town takes him approximately one hour. He said:

But walking also comes with its own challenges as you get fatigued and end up failing to deliver on your duties at work. While at work, the thought that you will be walking back home is something that can affect your performance… We are also in the winter season, it gets dark very early, this increases our chances of being robbed while walking home.

Meanwhile, the transport crisis has been tabled before the Tripartite Negotiating Forum (TNF), an engagement platform for Government, labour and the private sector on issues affecting socio-economic well-being.

The crisis comes after the Minister of Local Government, July Moyo recently suggested that private commuter omnibuses may not return on the road again urging owners to contract their vehicles to Zupco.