The Law Society of Zimbabwe (LSZ) has expressed concern over the arrest of advocate Thabani Mpofu. We present the LSZ ‘s statement in full below.

The Law Society of Zimbabwe has learnt with profound concern of the arrest and detention of Advocate Thabani Mpofu on the 1st of June 2020.

According to the facts on hand Advocate, Mpofu handed himself to the police on the same day. He was accompanied by his lawyer, Mrs Beatrice Mtetwa. Advocate Mpofu faces two charges of obstruction of justice. It is being alleged that he drafted and had an affidavit commissioned for a non-existent client, one Simbarashe Zuze. It is further alleged that Advocate Mpofu connived with one Joshua Chirambwe in the filing of a Constitutional court challenge containing duplicated Information from the Simbarashe Zuze matter thus defeating the course of justice. The Law Society notes that the matter is being handled by the special Police Anti-Corruption Unit (PACU). To the best of our knowledge, it appears that the other legal practitioners whom Advocate Mpofu allegedly connived with have neither been arrested nor have they been charged. According to our member, the said Simbarashe Zuze has on two occasions presented himself before the law and order section of the police.

The facts as alleged in second charge do not appear to disclose any offence having been committed. It is not clear why Advocate Mpofu has been singled out for arrest in a case where the charges allege connivance with other legal practitioners. It is equally not clear why a specialised unit dealing with corruption cases has been deployed to deal with this ordinary criminal case. It is also unclear why the police are only acting now more than a year after the alleged offence was committed.

As a result of the foregoing, the Law Society of Zimbabwe is anxious and concerned respecting the motive behind the arrest and detention. The Society recognizes and stands by the principle that a lawyer must never be associated with the cause of his client.

The domestic, regional and international Principles and Guidelines on the Right to a Fair Trial and Legal Assistance hold that, the State has an obligation to ensure that lawyers perform all of their professional functions without intimidation, hindrance, harassment or improper interference. Lawyers should be able to consult with their clients and present their client’s case free of threats in the discharge of their duties. The. standards are also set out under the United Nations Basic Principles on the Role of lawyers. It is, therefore, the State’s responsibility to guarantee that Advocate Mpofu, as well as all legal practitioners, are free to perform their duties without fear of intimidation or harassment.

We urge the State to ensure that state actors abide by the law and further ensure that lawyers are not subject to harassment and intimidation in the performance of their duties. We call upon the state to demonstrably assure the profession and the nation at large, that this is not a case which is motivated by malice, vindictiveness and an intention to muzzle the legal profession. 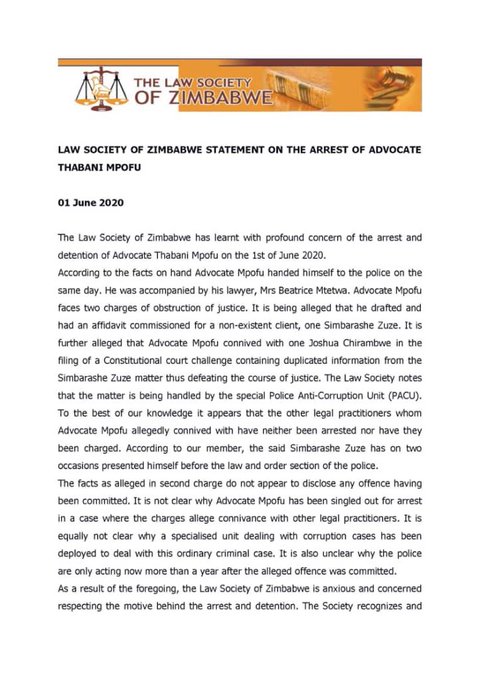 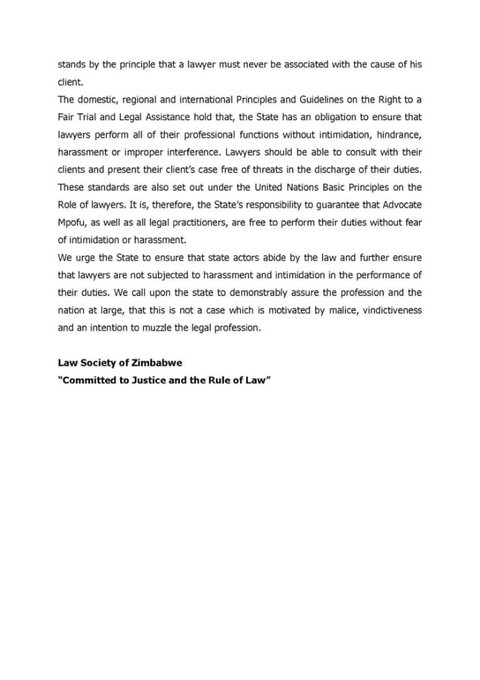 FULL TEXT: Law Society Of Zimbabwe’s Statement On The Arrest Of Chamisa’s Lawyer