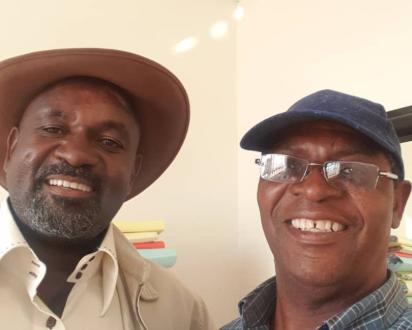 Former MDC T Chairman from the 2014 Structures Lovemore Moyo has denied rumours circulating that he might be rejoining MDC led by Nelson Chamisa, New Zimbabwe reports. This was after social media started circulating a photo of Moyo and MDC Alliance Vice President Welshman Ncube.

Moyo who resigned in 2018 after the death of the party’s beloved leader Morgan Tsvangirai dampened the MDC Alliance spirits when he denied the reports that he was rejoining their party. Said Moyo:

Our meeting had nothing to do with what you are asking. We have always met, me and Prof (Ncube). For your own information, this is our fourth meeting.

Remember we are both farmers and we come from the same region and worked together for so many years, so he is no stranger to me and I am no stranger to him.

That is my position, but about what the future holds and other things going forward, you cannot foretell.

MDC Alliance and MDC T are Locked in a leadership wrangle after the Supreme court delivered an academic judgement that declared Nelson Chamisa the illegitimate MDC T leader.