Malawi Court has ruled that the approach that was taken by the Zimbabwe Constitutional Court in the 2018 Presidential election challenge case was not a good one.

The Zimbabwean Constitutional Court ruled in favour of President Emmerson Mnangagwa and the ruling ZANU PF observing that the opposition MDC had failed to prove that ZANU PF had connived with the Zimbabwe Electoral Commission to manipulate results in favour of Mnangagwa.

Malawi is saying that approach is a bad approach. It observed:


This Court is alive to the fact that it is rare that elections are set aside on light or trivial grounds considering what goes on in the preparation for elections. (See Col (Rtd) Kizza Besigye v Yoweri Museveni and Electoral Commission 2001 Election Petition No. 1 of 2001 (Supreme Court of Uganda). Accordingly, this led the courts to develop a legal philosophy that even if there is non-compliance as long as results are not affected that results of the election will not be annulled. (See. The Zimbabwean case of Chamisa v Mnangagwa and 24 Others (CCZ 42/18) [2018] ZWCC (24 August 2018). That philosophy suggests that whatever serious electoral irregularities may have been committed, and an election will be allowed to stand as long as the petitioners do not demonstrate that the non-compliance or irregularities affect the number of votes in the election. This is the quantitative approach to resolving electoral disputes in the courts.

The Zimbabwe case of Chamisa v Mnangagwa and 24 Others (supra) seems to suggest that as a general rule an election will not be annulled if a breach of the law did not affect the election result. We have doubts that this would be a good approach, particularly where serious breach of the law is involved. What if the numbers themselves are as a result of an inaccurate counting, intimidation, fraud or corruption? Surely, for an election to be truly free, fair and credible it must be conducted in full compliance with the constitution and applicable electoral laws. 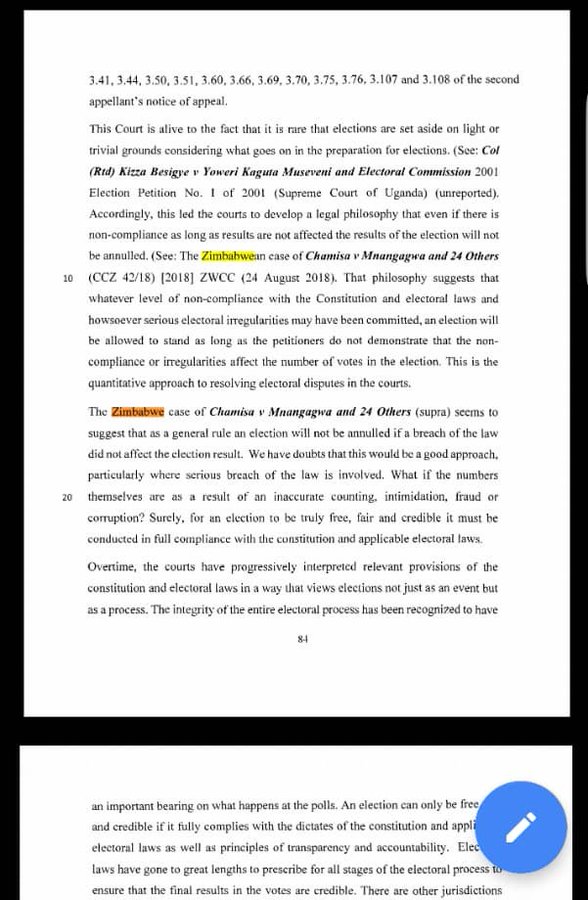