17 MAY 2020 1, Zimbabwe Heads of Christian Denominations (ZHOCD) has received with shock and disbelief the news of yet another abduction and inhuman treatment of three young women including a Member of Parliament.
This comes only some few days after the barbaric physical assault of two women, Ntombizodwa and Nokuthula Mpofu, of Cowdray Parkin Bulawaco by six police officers. It should be stated that the reports suggesting that Harare West Legislator, Joanna Slaniombe and her colleagues Cecilia Chimbiri and Netsai Marova were taken from police custody, and were tortured and sexually assaulted and inhumanely treated by yet to be known agents point to something that is against the heart of the Constitution of Zimbabwe and the various International Conventions to which Zimbabwe is a signatory and, above all, to our cultural norms and our Christian fundamental beliefs regarding the sanctity and dignity of life.

There are many reasons why all peace-loving and patriotic Zimbabweans should be appalled by such abductions and torture.

First, it is deeply disturbing that the country has seen so many cases of abductions in the last few months, most of which have not been conclusively investigated. What is further disturbing are the insinuations, from some State agents, that all these abductions arc either stage-managed or carried out by an unrecognizable “third force” without substantiating such claims with credible and irrefutable evidence. This constitutes the denigration of responsibility of the highest order on the part of Government.

Second, this ill-treatment of women takes place in 2020 when the whole world is celebrating the 25th Anniversary of the Beijing Declaration, which was a global high point in the recognition of the dignity of women after centuries of patriarchal domination and treatment of women as second class citizens of the world. We have realised that one of the major effects of the COVID-19 lockdown has been the worrying increase in domestic violence, especially against women and children. It is unthinkable that such violence could be replicated in even more severe proportions with State sanction.

Third, this takes place in 2020 when the nation is celebrating its 40. Anniversary of Independence. Should this not be the year when we should all be celebrating the restoration of the dignity of Zimbabweans in the face of racial segregation, especially women who tended to suffer double marginalization? We are appalled to see how women could suffer in the custody of the State, not only in the case of these three women but also the brutal assault of the two women from Cowdray Park in Bulawayo on 16 April by six police officers.

Fourth, we are aware of the economic hardships the ordinary people are facing as a result of the lockdown since it has interrupted the economic activities of the majority of Zimbabweans who are informally employed. Instead of the Parliament and other State Institutions providing leadership to galvanize the nation to work together to find shared
solutions to ameliorate the pain of the citizens, it is unacceptable to see such callous acts executed while citizens are suffering from the effects of the lockdown.

Fifth, it is sad that this incident takes place when Zimbabwe is the current Chair of the Regional Police Chiefs’ Corporation Organisation and that of the Organ on Politics, Defense and Security Cooperation in the Southern African Develpment Community (SADC). Woulf these responsibilities not be opportunities for the nation to demonstrate eemplary behaviour especially at the moment when we are pursuing much needed international engagement?

In light of the above, the Zimbabwe Heads of Christian Denominations therefore calls for

Deutronomy 6: 18 ” You shall do what is right and good in the sight of the Lord, that it may be well with you and that you may go in and possess the good land that the Lord swore to give your fathers.” 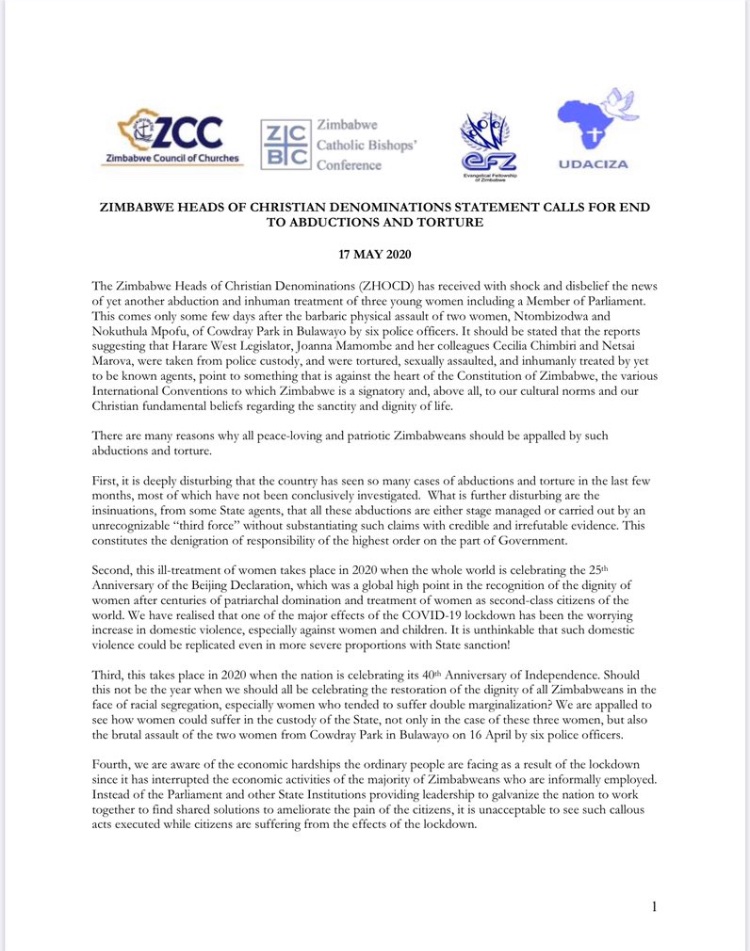 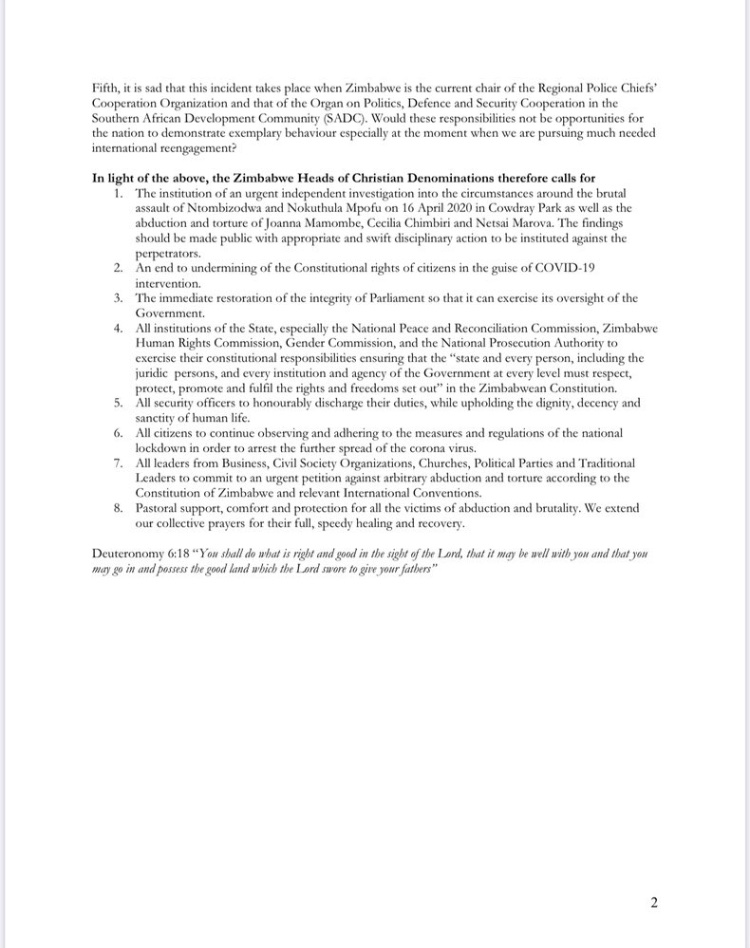 One Comment on “FULL TEXT: Zimbabwe Heads Of Christian Denominations Call For End To Abductions And Torture”