Zimbabwe HUMAN RIGHTS NGO Forum
Press Statement: Forum strongly condemns abduction and torture of MDC Alliance youth leaders 16 May 2020
The Zimbabwe Human Rights NGO Forum (the Forum) is appalled and registers its deepest contempt on the abduction and torture of Movement for Democratic Change (MDC) Alliance Member of Parliament Joana Mamombe and Youth Assembly leaders Cecelia Chimbiri and Netsai Marova. What the three have endured, constitute the most egregious and extensive sufferings a human being can experience, as proscribed by the Constitution of the land: unlawful and arbitrary detention (section 49), infringement of human dignity (section 51), violation of bodily and psychological integrity — including sexual assault (section 52), torture and cruel, inhuman and degrading treatment — including being forced to eat and drink human excreta (section 53) and violation of equal protection of the law (section 56). This followed an arrest for exercising their constitutional rights to speak out and to their conscience, including through peaceful demonstration.

Manner of arrest and abduction

The Forum noted the article in the Herald newspaper on 14 May in which the national police spokesperson Assistant Commissioner Paul Nyathi was quoted confirming the trio’s arrest, although he was still to find out where they were being held. The Forum also notes the corroboration from the trio that they were initially taken to Harare Central Police Station upon arrest. Additionally, the Forum notes the further social media communication of the Zimbabwe Republic Police (ZRP) through their Twitter handle, to the effect that the trio was not in police custody. Cogent explanation is needed on how and why the trio, if they indeed were in police custody, left that custody. Similarly, explanation is needed on the contradictory statements issued by the police.

It is worrisome, and everyone is justified to worry for their security and safety, if people in police custody can find themselves in a situation as the three. The State is duty-bound to account for all its citizens and to protect and ensure their security and well-being, even if under lawful detention. No citizen should live in fear of extra-legal treatment, either at the hands of the State or non-State actors.

No justification for abduction and torture

For whatever reason, and under whatever circumstance, no one should be abducted or tortured. Section 56(1) of the Constitution demands that all persons are accorded equal protection and benefit of the law. The law provides for the mechanisms through which even those who break the law are arrested, tried and if found guilty, treated.

For those who seek to apportion blame to the victims in whatever manner or form, the Forum reminds them that once a culture of disregard of the law and human rights takes root, and a cycle of violence and abuse of due process is established, no one is safe, including perpetrators. It is folly for anyone to derive pleasure in ascribing the heinous crime to “self-abduction” and other shocking explanations and justifications, and to revel in a self-sense of security. The culture of violence must be nipped in the bud.

Sexual assault continues to be used as a weapon of abuse and torture. All right-thinking citizens should be outraged. Whether one has committed an offence under the country’s laws or not, sexual assault can never be an appropriate response.

The constitutional right to privacy, as with any other right, stems for the need to respect human dignity, and not humiliate and expose victims to further trauma. It is extremely important for the media and for political leaders to vigorously speak out, when heinous crimes such as this are committed. In so doing however, the obligation to respect privacy remains. The Forum reminds the media and individuals visiting the victims to take extra caution to ensure a fine balance between exposure of the crimes committed and the protection of the victims’ privacy. Sensitive graphic material should be shared with discretion.

The time is now for government to categorically state its repugnance towards such savage and barbaric conduct. If the government shares the same standards of law abidance that it demands of its citizens, it is critical that the government condemns the violations both in speech and deeds. Episodes such as these simply serve to remind of impunity and the unjust past Zimbabweans have long suffered. If our leaders are sincere in turning a leaf to a truly new dispensation, the strongest condemnation of these acts is expected, and concrete, meaningful steps must be taken. The nation and the international community are watching.

The Forum strongly urges all concerned and well-meaning Zimbabweans to call for decisive action from the authorities. In particular, the Forum demands of the government to:

• Thoroughly and exhaustively investigate the circumstances of the arrest, abduction and torture of the three, and bring perpetrators to justice;

• Ratify and domestic the International Convention for the Protection of All Persons from Enforced Disappearances;

• Ratify and domesticate the Convention against Torture and Other Cruel, Inhuman or Degrading Treatment or Punishment; and

• Amend the Criminal Law (Codification and Reform) Act to include a stand-alone offence of torture, accompanied by severe punishment.
//ENDS// 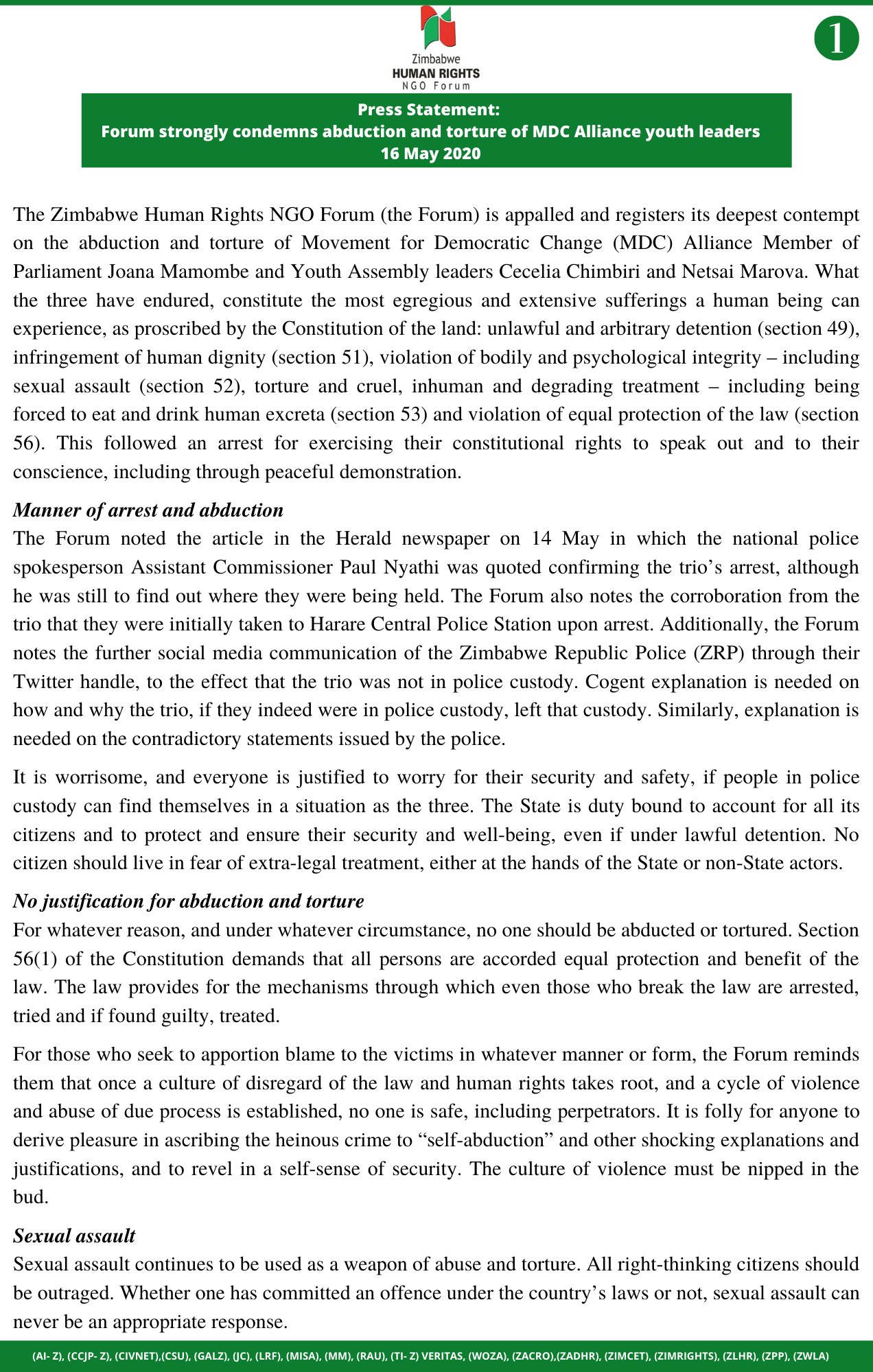 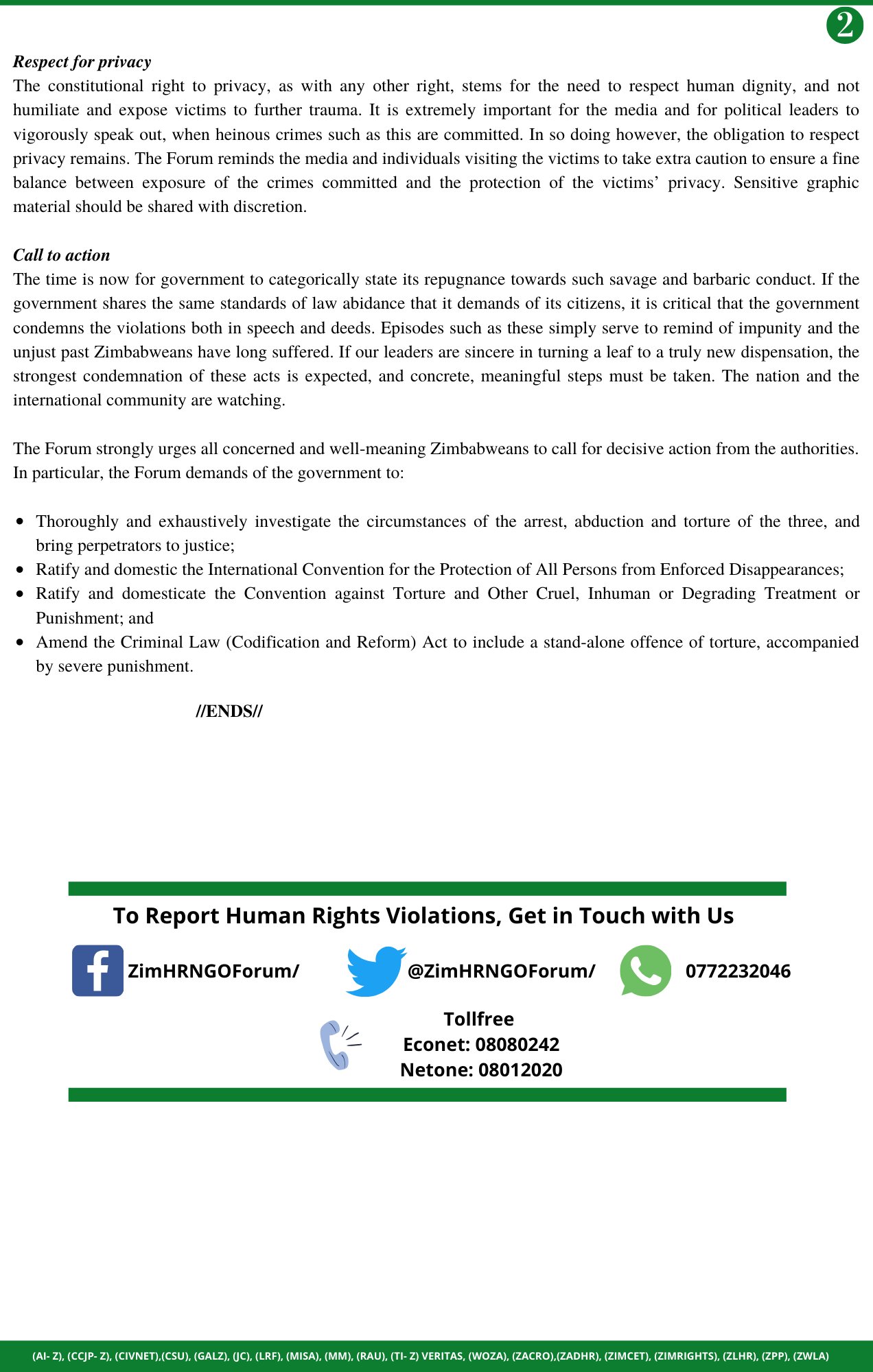 One Comment on “FULL TEXT: Human Rights Forum’s Statement On “Abduction, And Torture Of MDC A Members””