Agrippa Bopela Masiyakurima, a founding member and Treasurer General of the People Party led by former Zimbabwean Cabinet Minister Walter Mzembi has suspended three members of the party for gross misconduct and treason among other charges.

Ironically, Masiyakurima was recently suspended from the party by the Secretary-General, Lloyd Msipa who is among the suspended three members.

In a press statement, Masiyakurima said:

I Agrippa Bopela Masiyakurima being one of the Founders and Treasurer General hereby suspend the following members for gross misconduct, treasonous acts and regionalism and putting the Party in disrepute pending disciplinary hearing:

A. NEGOTIATING AND SEEKING TO LINK THE PARTY TO A TERRORIST GROUP
Refusal by Lloyd Msipa to unfollow Twitter Handle of ISIS-linked movement @FranceAlRasa and commenting on terrorism after counsel from Founders of the People’s Party who do not want anything to do with Terrorism and then further purporting to Suspend me as Treasurer General for calling him to order not to drag us and the leaders into a mess by linking us to terrorist groups.
B. NEGOTIATING WITH VIOLENT MOVEMENTS
Threatening violence on myself as Treasurer General if Guardian Council does not suspend me, which Lloyd Msipa then unilaterally did by suspending me without authority. Mr Lloyd Msipa together with Mr Hamlet Matavire and Mrs Lwazi Mbowa drafted a letter in Hamlet’s name which was sent to Guardian Council and media. The letter clearly states that if Guardian Council does not deal with me, the Youth will take the law into their own hands and harm me. The main reason of this being that I have been vocal on Twitter saying that we don’t want to go back to ZANU PF or to join Tysonwabantu Movement.
C. TRIBALISM AND CLAN/SM
Uneven distribution of position based on regionalism: National Women Chair and National Youth Chair are all relatives of the Secretary-General and three-quarters of the top leadership hails from Masvingo giving an unfair distribution of party post which is expected in a national party. I have been vocal on this.
THESE MEMBERS STAND SUSPENDED FROM REPRESENTING THE PARTY UNTIL FURTHER NOTICE. PEOPLE’S PARTY WAS NOT FORMED TO SUPPORT TERRORISM BUT PRACTICE DEMOCRATIC MEANS TO ATTAIN POWER.
MR AG’ B. MASIYAKURIMA
TREASURER GENERAL 05/05/2020 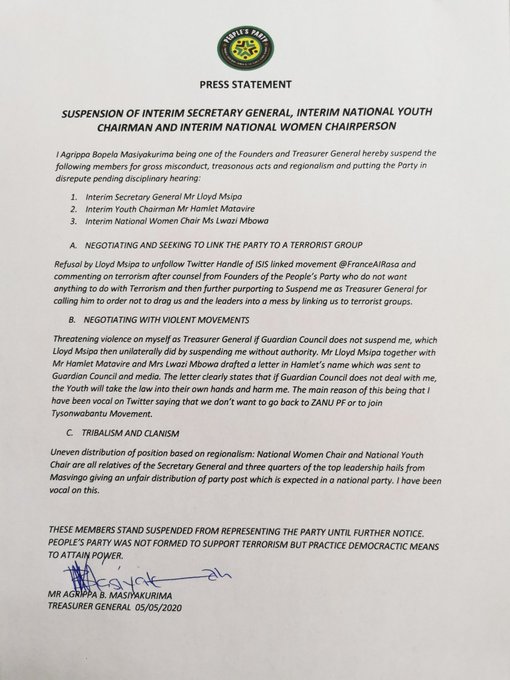