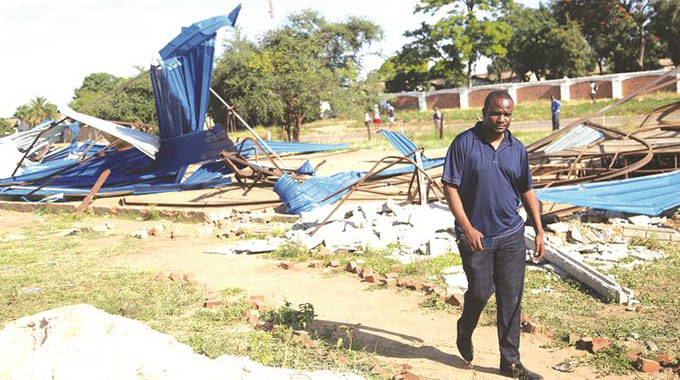 Goodness and Mercy Ministries founder Prophet Tapiwa Freddy walks past debris from his church which was demolished by Harare City Council in Glen View during the city fathers ongoing programme of destroying illegal structures in and around the capital city. – Picture: Believe Nyakudjara

Founder and leader of the Goodness and Mercy Ministries, Prophet Tapiwa Freddy has bemoaned the destruction of the church’s structure in Glen View 1 by the Harare City Council.

Freddy was left flummoxed by the City Fathers’ move as they did not warn him beforehand to remove materials from the temporary structure. Said, Freddy:

The church was demolished maybe because we occupied this place on a temporary basis. When they demolished it they claimed it was illegal.

Everyone was aware of this; that is why we did not build it on a permanent basis. We were just expecting them to tell us to remove the structures like what we had agreed on the first place.

So to our uttermost surprise, they just demolished without giving us any notice.

We were shocked because we used to have a good relationship with the Harare City Council. We have engaged them in many cases.

This place that we are right now it’s a counselling centre of Goodness and Mercy Ministries. We have its papers that is why it was not demolished, but where we were holding our church service, was on a temporary basis.

All along for the past three years, we were using tents fully aware that we cannot build anything and we even communicated with the local councillors here, and they gave us permission to set up a proper shed, which was stronger but on a temporary basis, and that is what we did.

We were just expecting them to tell us to remove it, but not to come and demolish just to cause an unnecessary commotion.

One Comment on “‘Prophet’ Feels Let Down By Council”