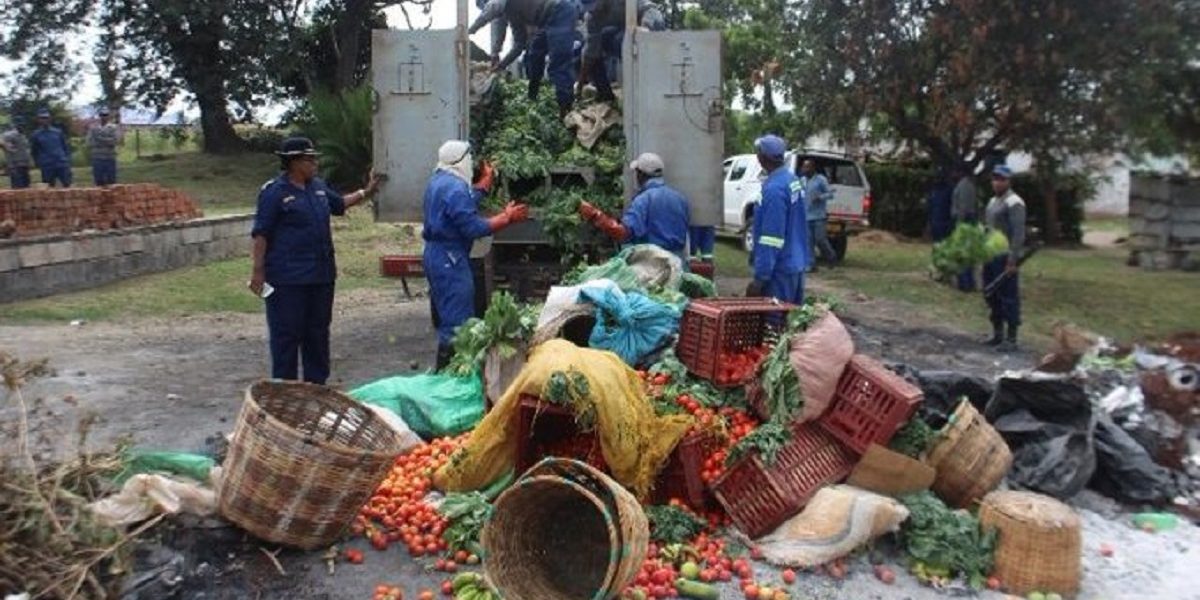 Police confiscate and destroy vegetables in Mutare during national lockdown

The Zimbabwe Human Rights Commission (ZHRC) has expressed concern over economic and physical violence against members of the public by security personnel and Harare City Council.

Reports suggest that Zimbabwe Republic Police officers and Zimbabwe National Army officers have during this national lockdown assaulted a number of citizens for defying lockdown regulations.

There are also reports suggesting that Harare City Council is in the process of destroying vendors’ stalls as per the directive from the Ministry of Local Government.

We present ZHRC’s statement in full below.

1. The Zimbabwe Human Rights Commission (ZHRC/Commission) continues to monitor the human rights situation m Zimbabwe fallowing the National …ban period which was proclaimed by His Excellency the President from 30 march to 19 April 2020 and now extended by a further two weeks to 3 May 2020.

2. The Commission welcomes the Government’s rapid response efforts which have resulted in strengthening of misting prevention and protection measures. In addition, the ZHRC notes the measures.. have been put in place to ensure that those affect. by the virus are quarantined and in receipt of adequate support to ensure that they recuperate.

3. The Commission notes that the country has remained largely calm and adhering to the lookdown order and the requirement to stay at home. H.., the ZHRC has come across media reports of incidents where citizens found in breach of the confinement order have been assaulted by some members of the police and army at shopping centres and some roadblock points.

4. In addition to allegations of physical violence on citizens, the Commission also notes economic violence, after destruction of vendors’ market stalls by the Ministry of Local Government and Public works, in terms of Circular Minute 3 of 2020, dated 8 April 2020. The Circular stated that a resolution was made to take advantage of the I.kdown so as to dean up and renovate workspaces for small and medium enterprises and informal traders so that these areas would be conducive to operate from when business reopens. It is unclear if financial resources are available to ensure that alternative workspaces are urgently availed to victims of the clean-up and renovations so that they do not suffer economic prejudice.

5. The Commission has also observed that employees from the critical skills sector, including health professionals and journalists have been denied passage by etc police at security roadblocks and at times spending long hours trying to justify their movement in the line of duty. The ZHRC has been advised that in some instances letters from employers to justify one’s movement have riot been accepted at roadblocks.

6. The Government of Zimbabwe and in particular the Zimbabwe Republic Police is urged to communicate more dearly regarding the code of conduct end requirements which should be met by dims who have been exempted and allowed to conduct their normal businesses. For example, some fresh produce farmers have been inconvenienced and suffered losses due to lack of clarity on how and where they are expected to operate.

7. The Commission, therefore, wishes to remind the Government that in employing the necessary measures to Contain Me COV10-19 pandemic, all duty bearers be, in public and private sectors, must observe human rights-based approach. This means that any dims., policy or mechanism must comply with key human rights principles relating to human dignity, non-discrimination end protection of vulnerable and marginalized groups.

8. The Commission appreciates the current efforts by Government to ensure access to basic commodities by ensuring that some retail shops open during specified periods of time. However, the ZHRC notes that there is often crowding and jostling at these total outlets where citizens go in large numbers in search of critical supplies, including the Subsidized roller meal. Such a Situation defeats golden rule of maintaining social distancing and therefore puts both the shoppers and shop attendants at risk of infection by the Coronavirus. Further, such a scenario disadvantages vulnerable groups like persons with disabilities, pregnant women and older persons who may not be able to endure the long queues or withstand the pushing and shoving.

9. In relation to the right to food es provided in section 77 of the Constitution, on 14 14 April 2020, the Commission received complaints of limited access to food from the San Communities of Tsholosho and Plumtree, who are one of the ethnic minority groups in Zimbabwe. They indicated that they are facing starvation due to stoppage of food aid distribution in their areas due to difficulties of enforcing social distancing at distribution points. They also highlighted that they cannot fend for themselves through the usual performance of menial jobs for fallow villagers due to movement restrictions imposed by the National Lockdown.

10. Apart from marginalized rural communities, urban communities which normally survive on informal trading and other menial jobs have also become economically vulnerable due to lookdown restrictions which are negatively impacting on their income-generating activities. Such communities deserve to be considered for food aid and other forms of economic support such as cash transfers.

1 I The Commission appreciates the necessity of limitation of certain rights during public health emergencies such as pandemics. However, it is critical to note that there are certain rights that are non-derogable under national and international human rights obligations. These include the right to life, freedom from torture, inhuman and degrading treatment, freedom from slave, and the right to a fair trial. Where the government is faced with two or more options, the Commission calls for adoption of the less restrictive alternative necessary to contain the situation. Any restrictions should meet the standards of necessity and proportionality and in line with Sections 86 and 87 of the Constitution on limitation of fundamental rights and freedoms and limitations during public emergencies.

12.1n light of the above, the ZHRC wishes to make the following recommendations;
12.1.1. Government of Zimbabwe

i. Provide a social safety net in terms of provision of food, for the vulnerable groups during the extended lockdown period to avert suffering and hunger. Alternative food aid distribution methods which take into account social distancing should be adopted to alleviate the plight of marginalised communities such as the San Communities of Tsholotsho and Plumtree, among others who are facing food deficit.

ii. Enforce social distancing by ensuring that retail outlets maintain orderly queues. There is also need to increase the number of retail outlets and selling points with subsidized or affordable basic commodities to prevent overcrowding at the existing facilities.

iii. Consider separate selling points or time slots for vulnerable groups like the elderly, pregnant women and persons with disabilities.

iv. Alternative vending sit. or workspaces Should be availed to operators of small and medium enterprises as well as informal traders before clean-up operations are carried out to prevent prejudice to economic rights.
12.1.2. Zimbabwe Republic Police

i. The Commissioner-General should direct all officers to avoid and desist from excessive use of force as well as unwarranted deprivation of the rights to personal security and liberty.

ii. Noting that the ZRP is a key player in the enforcement of the Iockdown orders, the Commissioner-General should ensure that officers on duty are provided with personal protective equipment (PPE) as well as access to tasting services and medical cars in order to Safeguard their health and mitigate the spread of the COVID-19 disease.
12.1.3. Citizens

i. Citizens are urged to continue being calm and law-abiding as well as being orderly and adhering to issued guidelines. They should ensure that their families remain protected from the pandemic by staying at home and avoiding unnecessary travel.

ii. Citizens are reminded to avoid circulation of false, misleading, and sensational messages through social media. Such messages cause confusion, panic, and fear which can result in making of irrational decisions that work against the national fight against the COvio-19 pandemic. 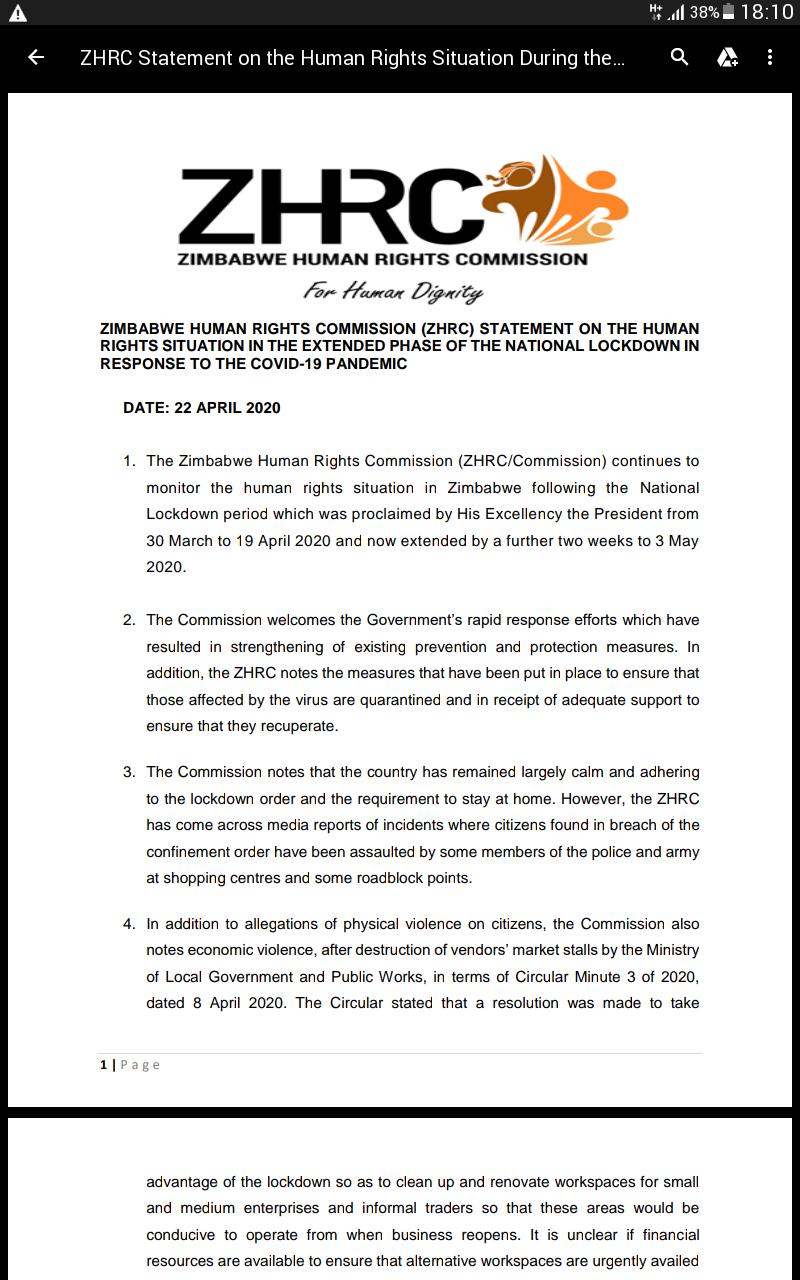 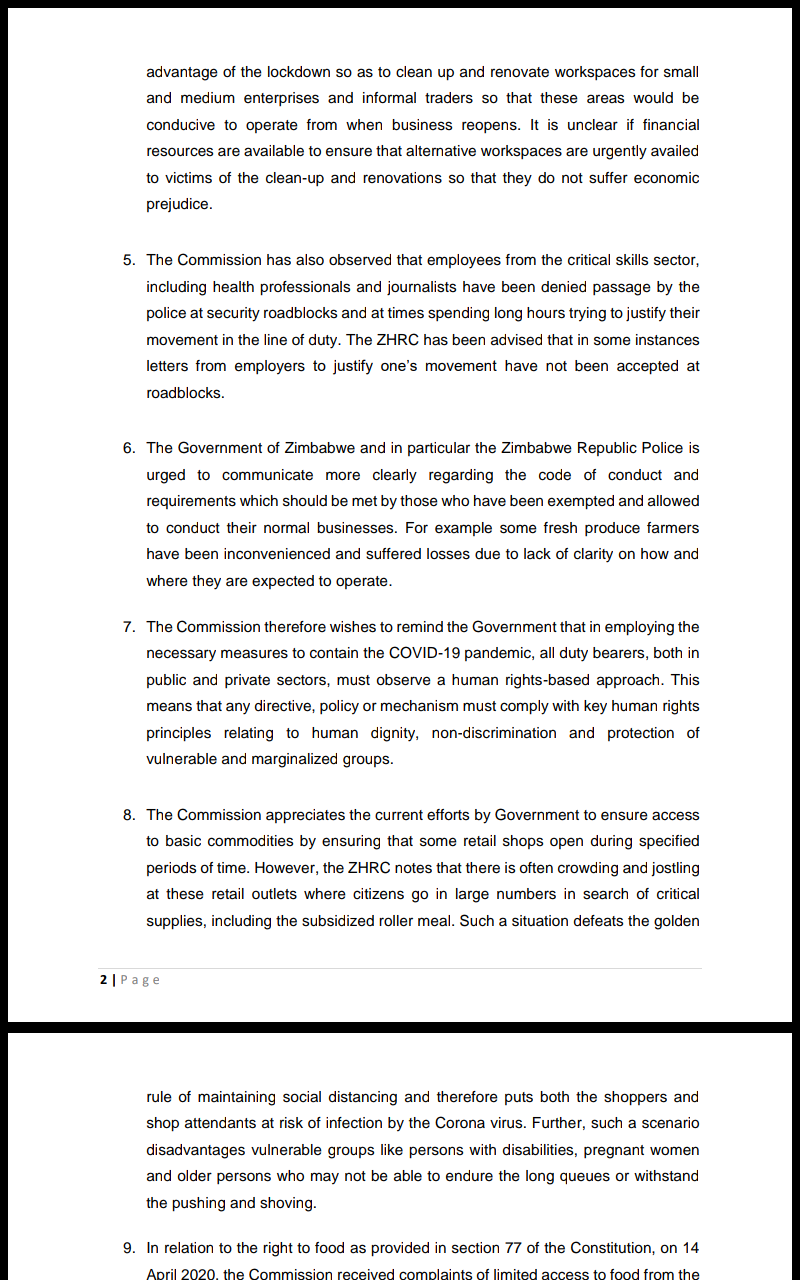 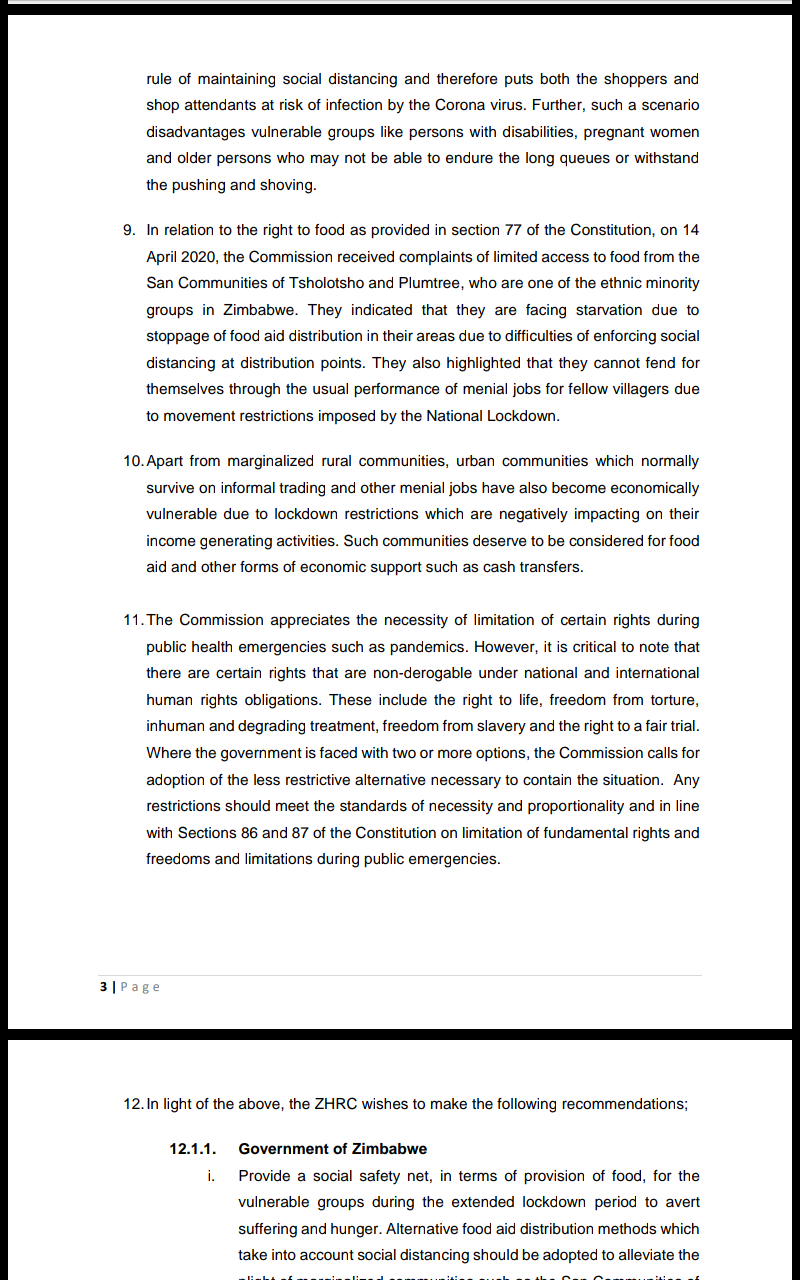 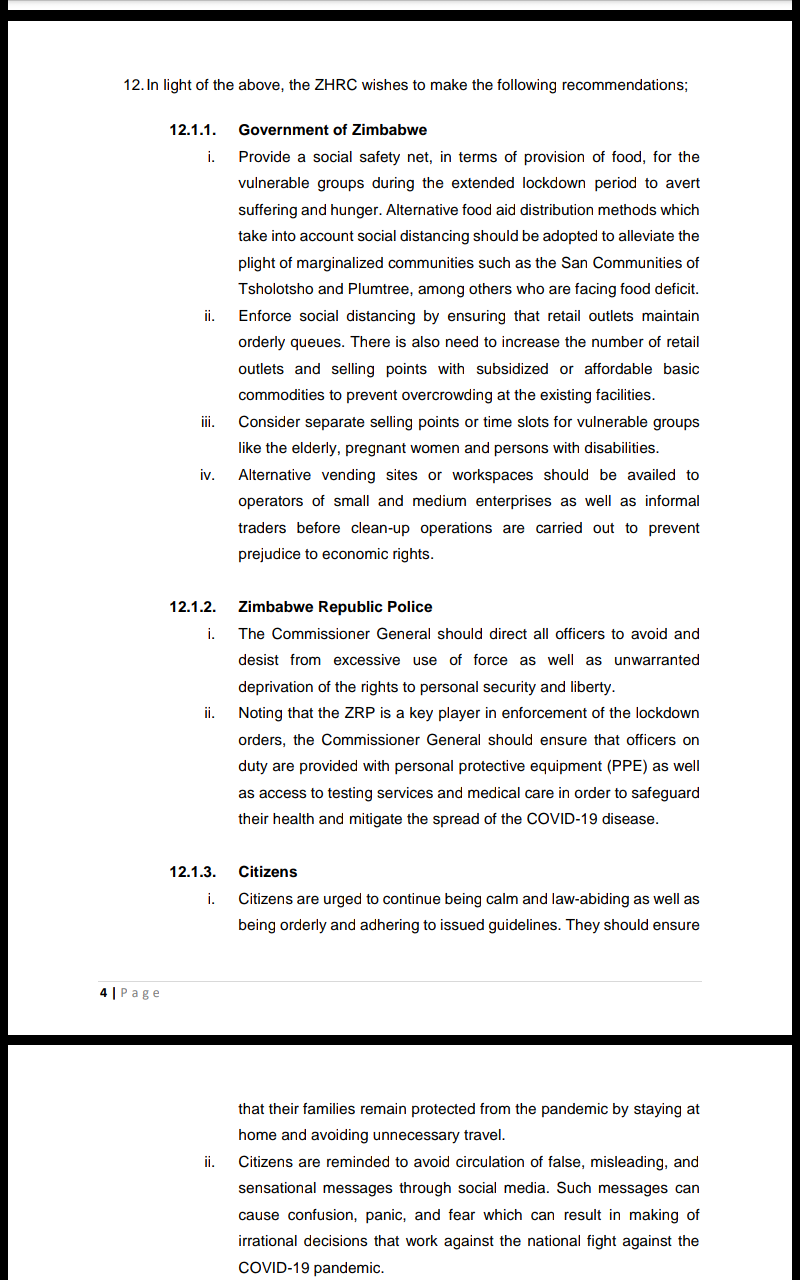