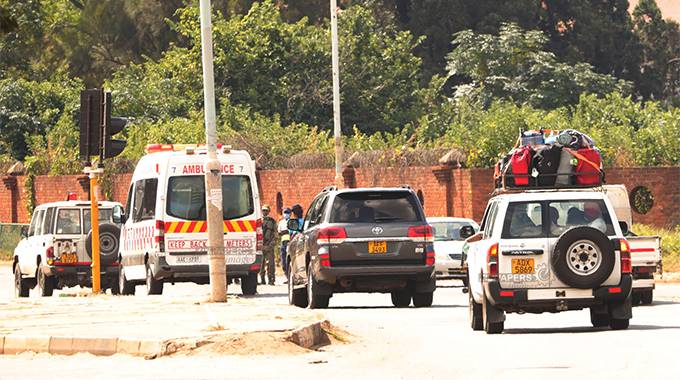 A convoy carrying Zimbabweans who returned from the United Kingdom on its way to ZIPAM where they will be quarantined. Picture by John Manzongo

A Zim Morning Post report claims that two of the 32 people who landed at the Robert Gabriel Mugabe International Airport on Monday aboard an Ethiopian Airlines (Reg ETARF) were not taken to ZIPAM for isolation but were let go.

The publication identified them as white pilots, Heuman Werner (German) whose seat number in the plane was 15A and Jungen Stephan Erwin (Swiss) who was on seat number 1C.

After getting their entry visas, the two were taken home by the people who were waiting for them.

As per protocol we will quarantine them at one of our isolation centres at ZIPAM in Mashonaland West and test them keeping regular checks.

Those who are symptomatic upon departure will be immediately ferried to Wilkins where we will test them and if found positive we take appropriate treatment action until such time they have recovered.

Meanwhile, the Permanent Secretary in the Ministry of Information, Publicity and Broadcasting Services Ndavaningi Nick Mangwana said that 30 people are being compulsorily quarantined at ZIPAM in Darwendale.

In a post on Twitter on Monday evening, Mangwana asserted that there were 30 Zimbabweans on the Ethiopian Airlines. He, however, did not reveal the whereabouts of the other two people who were reported to be on the plane. He said:

We wish to re-affirm that the number of Zimbabweans on Ethiopian Airlines was 30. This included Zimbabwe’s Ambassador to Sudan Dr EB Gumbo. He has to be quarantined and tested as per protocol. Dr Gumbo is here on official business.