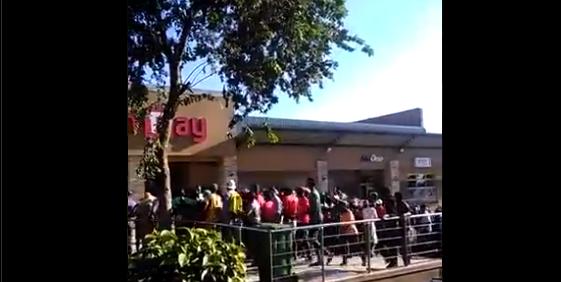 An undated video is circulating on social media showing a huge crowd of people in a mealie meal commotion. The video that was posted by Hopewell Chino’no did not shed light on the location and the date and time the video was taken.

However, in his caption, Hopewell seems to suggest that it was taken during the lockdown as mealie meal shortages worsen due to a number of factors.

The video clearly shows that hard-pressed Zimbabweans are totally disregarding social distancing as mealie meal shortages worsen due to a number of factors.

Someone is heard yelling in Shona, telling the people to stand one metre apart but the call apparently fell on deaf ears. Chin’ono captioned the video with the following words:

Our people are in this situation because of the rampant & mindless LOOTING of billions$$$$ under Mnangagwa using Command Agriculture & Sakunda Holdings as a vehicle to rip the State coffers! I have said for the past 2 years that it won’t end well. I was ignored. And now…….

Watch the short video clip below: