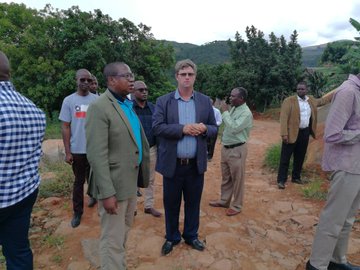 The Zimbabwean government reneged on its promise to assist relatives of the victims of Tropical Cyclone Idai whose bodies were swept to, and buried in Mozambique, to visit the neighbouring country and identify where they were buried.

More than 82 Zimbabweans were swept into Mozambique, where locals buried them as the bodies had become unrecognisable.

Juliet Machangira, 26, who lost her two sons, Tadiwanashe, 4, and Lovemore Maute, 12, told the Washington Post that she wants to see where her sons were buried for her to find closure. She said:

We need closure. The truth will set us free. The government promised us money to go to Mozambique to do our own search, but that was the last we heard about it. I want to talk to the locals who buried the floating bodies to identify my sons.

Kuda Ndima, 37, also lost two children during the storm — her 12-year-old son, and a baby she was five months pregnant with, which she miscarried after she was swept 300 yards downstream and hit a boulder. She said:

They lied to us saying they would help with the repatriation and reburial, but they are doing nothing about it.

We wish they could even make a grave for the unknown victims, like a memorial. Instead, they are just folding their hands as if nothing has happened.

A forensic body recovery specialist, Stephen Fonseca of the International Committee of the Red Cross, who worked in Mozambique after the cyclone said it would be a huge challenge to know the identity of people who were buried at various site in the country.