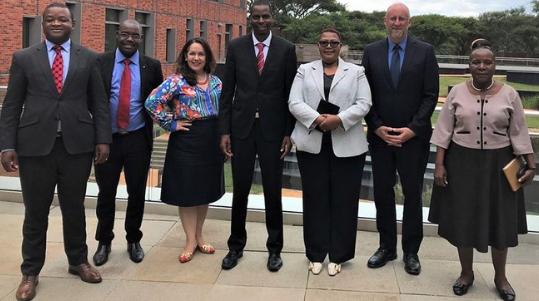 Efforts by POLAD to engage the west in their bid to end Zimbabwe’s 20-year isolation have left the UK, The US and The EU expressing the view that Thabo Mbeki must be the dialogue mediator and Chamisa should be part of the Political Actor’s dialogue, Newsday reports.

This was revealed in a report the Khupe led committee compiled on behalf of POLAD. The report reportedly reads in part:

In key issues raised by the diplomatic community in our recent engagements, although they applaud and appreciate the great initiative taken by His Excellency ED Mnangagwa and the political leaders that participated as presidential candidates in the 2018 harmonised elections, that of coming together to establish Polad, they are all of the view that the on-going dialogue process should rather be broad-based, with key stakeholders that include the MDC Alliance, civic society, religious groups, white commercial farmers and business.

Both the US and EU ambassadors emphasised their desire to have South Africa play a leading role in the dialogue process with former President Thabo Mbeki as the mediator.

Nelson Chamisa and the MDC Alliance have said they will not join the dialogue charade, while the president has said he will not have a dialogue outside POLAD.

One Comment on “EU, The UK, The US Insists On POLAD Engaging Chamisa And Having Mbeki As The Dialogue Mediator – Report”