The MDC have labelled FAKE the letter that is circulating on social media purporting that Morgan Komich has resigned from the country’s leading opposition party.

MDC official twitter handle tweeted a photo with the letters FAKE inscribed on top of the letter that was circulating on social media claiming Morgan Komichi has resigned from the party: 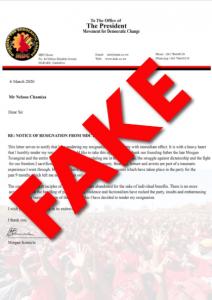 Stories have been circulating that Chamisa is sidelining other party members in favour of his agemates. The MDC has never openly addressed those stories ever since they surfaced.