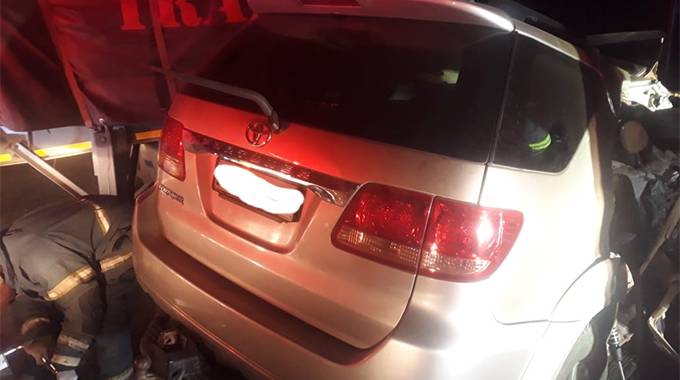 Police in Limpopo said they were investigating a case of culpable homicide after a Musina bound Toyota Fortuner rammed a haulage truck that was travelling towards the border.

Zimbabwean nationals are suspected to be among the victims of an accident which occurred on Sunday evening when a Musina bound Toyota Fortuner rammed a haulage truck between Musina and Beitbridge Border Post along the N1 highway South Africa.

Seven people, who were in the Toyota Fortuner, died on the spot. South Africa Police Services provincial spokesperson Brigadier Motlafela Mojapelo confirmed the accident saying the identify the deceased has yet be established. He said:

The Police in Musina have registered a case of culpable homicide after seven people lost their lives when a Toyota Fortuner smashed into the side of a truck on the N1 road between Musina and Beitbridge at around 2130 hours on Sunday night.

The truck had reportedly just moved from the Petros Truck Stop which is located next to the road, turning onto the N1 road towards Beitbridge when the Fortuner, coming from the northerly direction towards Musina, rammed into its trailer.

Emergency personnel had to remove the deceased from the wreckage of their vehicle that was trapped under the truck. All the deceased, a baby boy aged about two years, three women and three men, were in the Fortuner. The truck driver was alone and did not sustain any injuries.

The N1 highway is one of the busiest roads which links South Africa with its northern neighbours. Sixty people are reported to have died in accidents in the last 24 months along the highway.