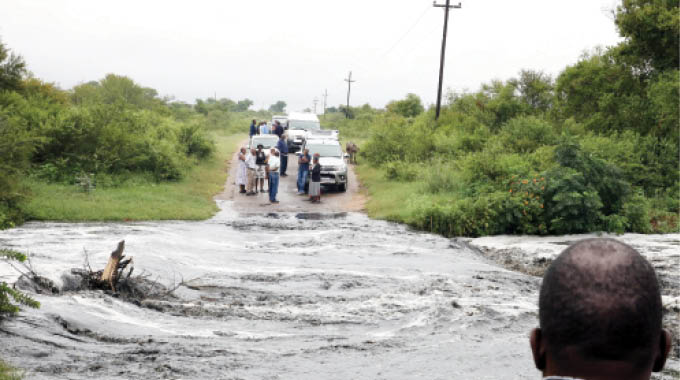 Motorists wait for water to subside at the flooded Phekiwe River along Solusi Road in Pumula South on Sunday (23/02/20). Bulawayo and its surrounding areas experienced flash floods after heavy rains in the morning.

Flash floods hit parts of Bulawayo following heavy rainfall on Sunday morning, with motorists having to wait for the water to subside at the flooded Phekiwe River along Solusi Road in Pumula South.

Two Bulawayo Fire Brigade officers were injured after a water tender they were travelling in was involved in an accident along Plumtree Road near Dunlop on its way to Nketa suburb to attend to a flash floods distress call by residents. Acting Bulawayo Chief Fire Officer Jabulani Ndlovu said:

Two of our men who were responding to residents’ flash floods calls were involved in an accident along Plumtree Road near Dunlop.

The road was slippery as a result of the rains and the driver lost control of the vehicle which landed on its side. The two were rushed to the United Bulawayo Hospitals where they are receiving treatment.

From the incidents that we attended to, we found that the flooding was caused by failure to open up weep holes on precast walls.

We had to open up the weep holes to allow water to freely flow from the affected houses as some of the water was flowing into houses damaging property.

Ndlovu urged residents to open weep holes in line with the city’s by-laws when constructing precast walls and also to avoid crossing flooded streams as they risk being swept away.