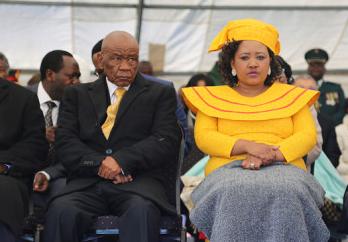 Lesotho Prime Minister Thomas Thabane travelled to South Africa for “a routine medical check”, a day before he was set to appear in court on murder charges.

Thabane, who was due to be charged with the murder of his estranged wife this Friday, left the mountainous kingdom of Lesotho on Thursday. His personal secretary Thabo Thakalekoala told AFP:

He is not attending court, he has gone for a medical check-up in South Africa.

Thabane (80) announced earlier on Friday that he would quit office by the end of July due to old age.

He is accused of having hired hitmen to kill Lilopelo Thabane, 58, then his wife in June 2017. The murder occurred just two days before Thabane was sworn in as Prime Minister following an election.

Thabane’s current wife, Maesaiah Thabane, 42, has also been charged with the same murder of Lilopelo.