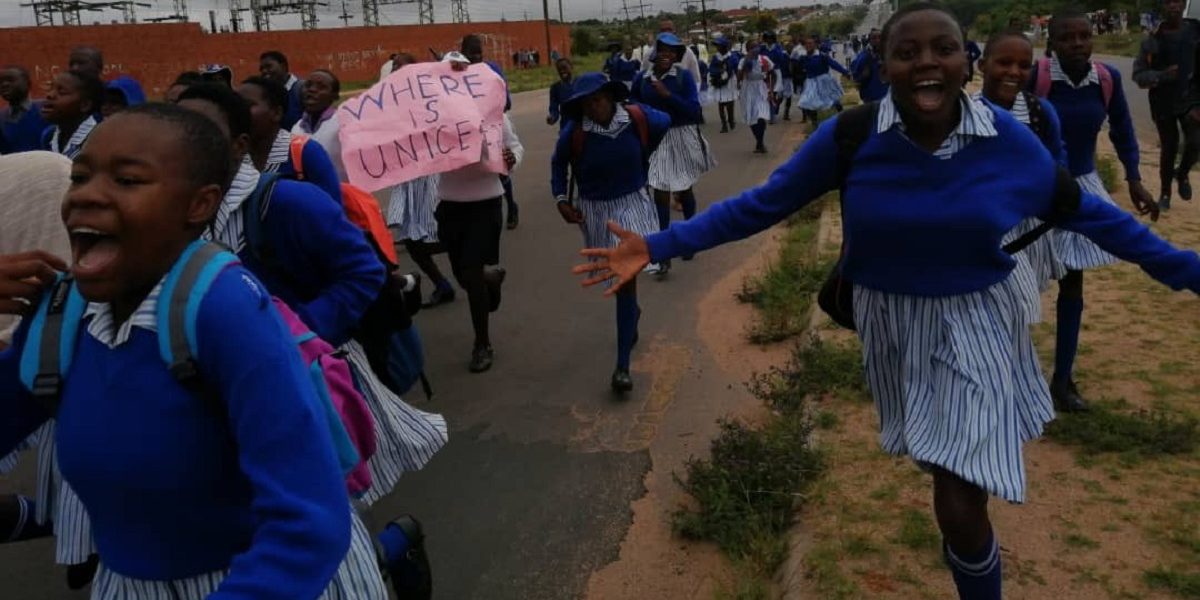 Former Njube High School Biology teacher, Brian Mutsiba who led the students’ demo last month has narrated how he escaped the country before settling in Namibia.

Mutsiba became a wanted man after a video of the students’ demonstration on 20 January over poor conditions for teachers and increment of school fees went viral.

Police tried to locate the former ZPCS officer but failed. He narrated:

I escaped the country after lying low for four days since the police and security agencies had instigated a manhunt for me. I gave the impression that I had headed for Zambia on social circles but moved in the opposite direction and headed for Botswana.

I walked a total distance of 30km deep into Plumtree before jumping the border then eventually made it to Gaborone. I lay low once again. When security details were close I skipped another border into Namibia and for now I am safe.

I am a father of three. My family was left behind in Zimbabwe under the upkeep of relatives. My eldest daughter is a 6th form student at Njube High School and did take part in the demonstration. So she was harassed for a while by the police so as to coerce her into revealing my whereabouts.

The current situation in terms of observing children’s rights is dire and at most pathetic. If compared to the situation of 2008, the current scenario has escalated to catastrophic levels.

Due to meagre salaries teachers are currently incapacitated to attend for duty let alone lessons. The situation is further made grave by the mere fact that most government schools increased their fees by between 300-500 percent, putting the reach of education beyond the ordinary parents.

The situation is worsened by the high costs of uniforms, books and educational accessories. With the paymasters adamant to maintain the status quo, millions of children in Zimbabwean government schools are continually bound to suffer from the pangs of this education genocide.

The hardest hit are the rural children who are at the end point of the margin and this also correlates with the situation of the rural teachers who are at the apex of incapacitation. At the end of the day, education is near to nonexistent in government schools.

Slowly but surely this young generation is being academically slaughtered. This comes as no surprise as the children of politicians opt for educational opportunities abroad.

I am not working but have support of the humanitarian community. To be honest, I did not organise the demonstration, I only supported the children in their quest for a reasonable cause, their right to education.

There is a famous adage that says ‘Life begins where fear ends’. If the cause is worthy, at times we are compelled to make that sacrifice. The fight for freedoms and rights therefore demands some who are willing to defy the odds and make such sacrifices.

As long as I still fear for my life I do not see myself coming back. The growing concern is that I may first face a court marshal before I appear a civilian court as I have served under the corrections department before I joined the Ministry of Education.

A court marshal by any standards is ruthless. However I aim to keep talking on the rights of the voiceless, the children.