Zimbabwe has been placed top on the list of countries with the biggest shadow economies in the world. This is according to a 2015 report by the Global Economy which placed Zimbabwe on number one claiming the Zimbabwean economy is 67% informal.

From Africa, Gabon and Nigeria join Zimbabwe in the top 5 of the shadow economy rankings in the world. No other data is available on shadow economies since then. The IMF report on the subject was also published in 2015. 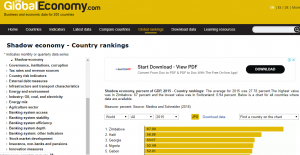 2 comments on “PICTURE: Zimbabwe Has The Biggest Shadow Economy In The World – Report”