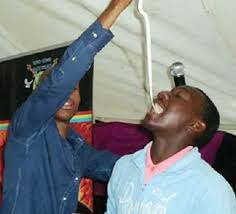 South Africa’s Minister of Finance Tito Mboweni said modern-day “pentecostal” churches led by pastors who lead their congregates to perform bizarre antics such as eating snakes should be taxed.

Posting on Twitter, Mboweni invited his followers to suggest ways by which the taxation can be instituted. He said:

Any ideas about how to impose taxation on these mushrooming handy clappy, snake eating “Churches”. The time to tax them is now!!

In July 2015, the pastor of the End Times Disciples Ministries church in Soshanguve Penuel Mnguni was pictured while one of his congregants opened his mouth as if to swallow or bite the snake.

Several pictures were posted on the church’s Facebook page, with a caption that read:

Man of God declared a snake to become chocolate (chomp) and the congregation ate it. We have the authority to change everything into anything and it will obey because of our authority.